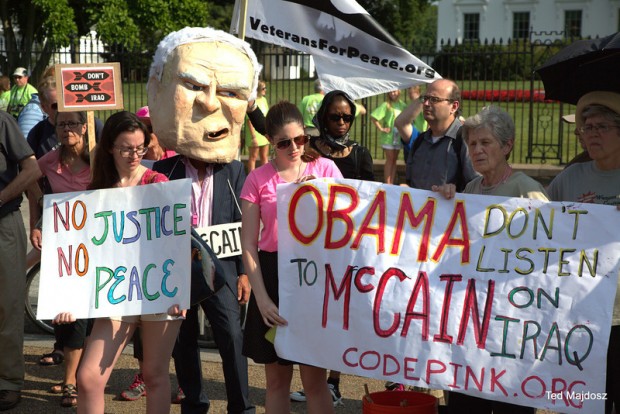 Harsh Realities Of The Iraq War

“This force is deploying for the purpose of protecting U.S. citizens and property, if necessary, and is equipped for combat,” Obama said in a letter sent to House and Senate leaders. “This force will remain in Iraq until the security situation becomes such that it is no longer needed.”

“Our security will require all Americans to be forward-looking and resolute, to be ready for preemptive action when necessary to defend our liberty and to defend our lives,” said President George W. Bush in June 2002.

Politicians and intelligence contractors under both the Bush and Obama watch have failed to conduct themselves with integrity on many levels when taking up the practice of “protecting American interests.”

Americans have grown weary of backing a war predicated upon a lie. In an op-ed, former congressman Denis Kucinich pulled a red flag on the Obama administration for failing to keep the promise to deal with the misdeeds of the prior administration.

“The unwillingness to confront the truth about the Iraq War has induced a form of amnesia which is hazardous to our nation’s health. Willful forgetting doesn’t heal, it opens the door to more lying,” he wrote.

Many lives have been lost, billions of dollars if not trillions have been squandered or poached in the pursuit of war oil in Iraq. Halliburton continues to fight the federal government to clear their alleged role in overbilling for services during the Iraq war. This makes the Dick Cheney’s claim in a teleprompter jibberish drivel almost comedic. Cheney lost the confidence of the majority of Americans soon after news broke that there weren’t WMD’s. It is likely that Dick Cheney had never been very much concerned about the public opinion. Lest we forget he told the congress to “Go fuck yourself!” on the House floor while he had been VP.

Sen. Rand Paul (R-KY), recalling President Dwight Eisenhower’s warning about the military-industrial complex, noted, “We need to be fearful of companies that get so big that they can actually be directing policy.” And the company he had in mind was Cheney’s former home: “When the Iraq War started, Halliburton got a billion-dollar no-bid contract. Some of the stuff has been so shoddy and so sloppy that our soldiers are over there dying in the shower from electrocution. I mean, it shouldn’t be sloppy work; it shouldn’t be bad procurement process. But it really shouldn’t be that these people are so powerful that they direct even policy.”

DO WE KNOW THE TRUTH?

At the start of the Iraq war in 2003, we as a concerned public welcomed the idea of the military and journalists fusing together under an “embedded journalist” program that didn’t shed much light on the events which came to be on the ground. Confidence in the mission diminished quickly.

Last week, Pvt. Chelsea Manning wrote in a New York Times op-ed that “it is impossible for Americans to grasp fully what is happening in the wars we finance.” All of the mainstream media has turned to the cast of players that drove us into the disaster we now see in Iraq.

We need to take a step back from the polarization of partisan blame to ask ourselves as a nation and a global community, can we trust our politicians and media to uphold the most basic principles of doing justice in taking up another battle in Iraq? The truth is plain to see that the so-called liberation of Iraq didn’t benefit the people of that region.

Private Manning and former CIA analyst John Kiriakou have both given up their freedom to expose the great injustices and mismanagement involving torture during the initial Iraqi invasions. Last year, former Rep. Duke Cunningham completed a 7-year stint in prison for his corruption practices of bribe taking from war contractors. CIA director Porter Goss and other Hill politicians had been allegedly attending poker parties with free hookers at the Watergate Hotel  The sacrificial lamb of former congressman Cunningham killed further media interest in this highly corrupt act during a time of war.

Throughout the Iraq war many allegations had been swept under the carpet. Porter Goss who had a background in the House Intelligence Committee, Ethics Committee (no joke), and played a significant role in the creation of the Homeland Security Agency made a quick exit, soon after the Watergate poker/hooker connection had been suggested. Another connection between Goss and a questionable character Dusty Foggo complicated matters during this time. The former CIA Chief’s top appointee was brought up on charges of wiretapping.

America must stop and consider the moral dilemma of decent men like John Kiriakou, who has given up his freedom to expose the torture memo resulting in his 2 ½ year sentence in exposing war crimes by the hands of US personnel:

Director Petraeus—former Director Petraeus made a statement in October when I agreed to take a plea to make these other charges go away, and he said that my conviction shows that we have to take our oaths seriously. Well, I took my oath seriously. My oath was to the Constitution. On my first day in the CIA, I put my right hand up, and I swore to uphold the Constitution. And to me, torture is unconstitutional, and it’s something that we should not be in the business of doing. (Kiriakou on Democracy Now with Amy Goodman, January 30th)

The liberation of Iraq is a crucial advance in the campaign against terror. We have removed an ally of Al Qaida and cut off a source of terrorist funding. And this much is certain: No terrorist network will gain weapons of mass destruction from the Iraqi regime, because the regime is no more. – The Bush “Mission Accomplished” Speech (May 1, 2003, aboard the USS ABRAHAM LINCOLN)

Yes, the regime is gone, and the mess created by both the Bush/Cheney administration is enough. Neglecting to sufficiently correct the erring ways of the previous administration, Obama/Biden have left Iraq in a tribal nightmare very much like the impossible situation our military deals with in Afghanistan.

The truth is evident that the liberators must be somebody other than the United States of America. It’s a far stretch to assume that the people of Iraq will greet the U.S. military as great liberators this time around. This civil war or regional conflict will be boiling over with or without American participation. As a nation, Americans must confront themselves with the harsh question, haven’t we given enough for a battle that has no foreseeable solution?