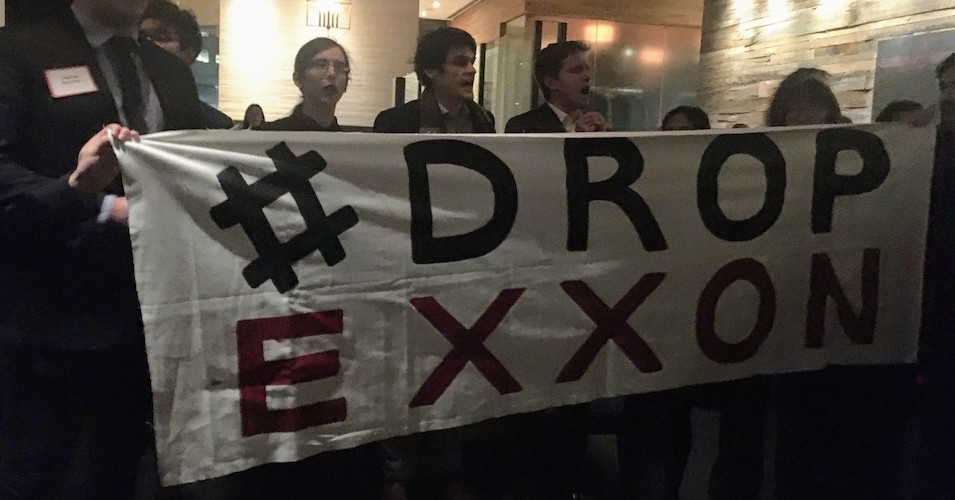 “This is a do-or-die moment in human history.”

Over 100 students from Harvard Law School staged a public protest against a recruitment dinner hosted by law firm Paul Weiss on Wednesday night, calling for the company to cut ties with fossil fuel giant Exxon.

In a statement, the demonstrators said they were taking action because of the severity of the climate crisis.

“This is a do-or-die moment in human history,” said student Aaron Regunberg, one of the action’s leaders, in a statement. “We have just a few years left to rein in corporate polluters and address the climate crisis.”

“This firm’s enabling of corporations like Exxon to continue blocking climate action and evading accountability for their malfeasance is, simply put, not compatible with a livable future,” Regunberg added.

The firm recently successfully defended Exxon in a case brought by the state of New York over the accusation that it misled investors about the costs of climate change to its business. Now, it’s defending the company again in a similar lawsuit in Massachusetts, just miles from the Harvard campus.

“Every year, Paul Weiss holds receptions to recruit students like us—the future lawyers they need to stay on top of their field,” said student demonstrator Carly Margolis. “But one thing you won’t hear them touting at these events is their representation of ExxonMobil—the corporation that has, according to climate leaders like Bill McKibben, ‘helped more than any other institution to kill our planet.'”

“We came today to send a clear message to the partners at Paul Weiss that as long as they are working to shield the corporate polluters wrecking our climate, we won’t be working for them,” Margolis said.

McKibben, co-founder of 350 Action, tweeted his support of the protest on Thursday.

I have a letter on my wall from this firm, demanding I secure all my emails in case they showed a conspiracy to hurt Exxon. Law students: if you would enjoy a career harassing activists and writers on behalf of the super-powerful, Paul Weiss is for you!https://t.co/nUT1jEY7uy

The protest took place at an upscale eatery in Cambridge, Massachusetts where attorneys from Paul Weiss were pitching students on working for the firm. As the firm’s partner Kannon Shanmugam addressed the room, a group of protesters holding a banner reading #DropExxon began chanting slogans.

The protest inside the event went on for 15 minutes. The group then joined a larger crowd of students outside the restaurant for further demonstrations.

Demonstrations in the legal profession against clients are rare, for reasons explained by the Guardian:

The protesters say they want to bring accountability to the legal world, where attorneys traditionally have been expected to accept that all entities deserve representation regardless of their deeds. The action is especially jarring because the field’s culture dictates professionalism.

Harvard Law student Hannah Perls, one of Wednesday’s demonstrators, said she was please to see that culture changing.

“I’ve been at Harvard for almost three years, and in my experience, direct action like this is incredibly rare at our school, with some notable exceptions,” said Perls. “The fact that students are overcoming the culture of complacency that dominates law school is truly a big deal, and gives me hope that real change is possible.”

Other members of the Harvard community and the environmental movement expressed support for the protest.

“Our planet’s on fire—and big law firms like Paul Weiss, when they defend ExxonMobil in court, are standing with the arsonists,” tweeted Fossil Fuel Divest Harvard.

Yesterday Harvard Law students shut down a fancy recruitment session by @PaulWeissLLP over their defense of Exxon. #DropExxon.

It’s not just that young people CAN make change – if we want a livable future, young people MUST lead the way.

So exciting to see law students holding their profession accountable to humanity by calling on top firms to #DropExxon!https://t.co/ADKAMzwtrJ

“Paul Weiss is on the wrong side of history,” tweeted Harvard Law student Amy Frieder. “If the firm wants to cultivate a positive climate for new attorneys, it must #DropExxon as a client.”