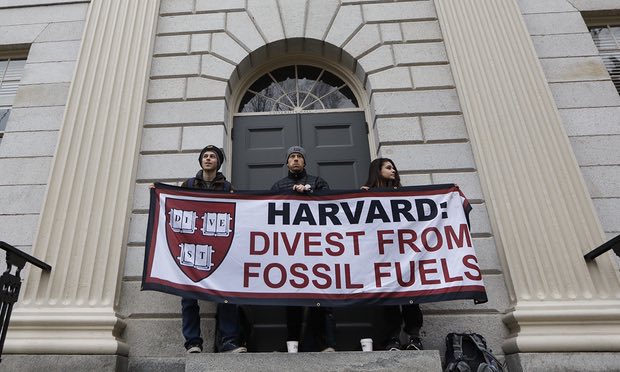 University stops short of fully divesting its $36bn endowment from coal, oil and gas but green groups welcome the breakthrough after a five-year campaign

Harvard University is “pausing” investments in some fossil fuel interests following a five-year campaign by some students and environment groups to pressure the university to divest itself from coal, oil and gas.

The elite university has come under fire for investing its $36bn endowment in a portfolio that contains fossil fuel companies and has until now resisted a concerted divestment campaign that has also targeted other US universities.

However, Colin Butterfield, head of natural resources at the Harvard Management Company, said that climate change is a “huge problem” and that “for now, we are pausing minerals and oil and gas.”

Butterfield said that Harvard indirectly invests in fossil fuels through outside funds, although the management company has previously signalled that it is moving away from coal due to a lack of profitability.

“What I can tell you is, from my area, I could honestly say that I doubt – I can’t say never, because never say never – but I doubt that we would ever make a direct investment with fossil fuels,” he said.

While Harvard hasn’t declared a full moratorium on fossil fuels, campaigners have hailed the pause as a breakthrough moment in the lengthy fight to get the university to divest. A group called Divest Harvard is demanding that the university freezes new investments in fossil fuels, divest from direct holdings in the top 200 publicly listed fossil fuel firms and rid themselves of all indirect ties within five years.

Protests escalated in March when students blocked the entrances to Harvard’s University Hall. In a letter to Drew Faust, Harvard’s president, Divest Harvard demanded the university act “morally and with a conscience” but an official response stated that while climate change was “one of the world’s most urgent and serious issues” it disagreed with the divestment approach.

Bill McKibben, co-founder of climate campaign group 350.org, said: “Harvard is divesting through the back door – testimony to the great pressure applied by students, faculty, and alumni, but also to its establishment unwillingness to simply say forthrightly: the fossil fuel age must end.

“Still, the significance is enormous: the richest and most famous educational institution on our planet is now siding with the future, not the past.”

The protests at Harvard were mirrored by a sit-in action at the University of Pennsylvania, where students also demanded the endowment divest from fossil fuels. Columbia University, under similar pressure, recently announced that it would divest from companies getting more than 35% of their income from thermal coal production.

Last year, Yale announced it had removed around $10m in fossil fuel investments from its $25bn endowment and Dartmouth announced a review of its holdings. Meanwhile, the board of trustees of Cornell University approved a standard that would trigger divestment in a “morally reprehensible” company without specifying a specific approach to fossil fuels.