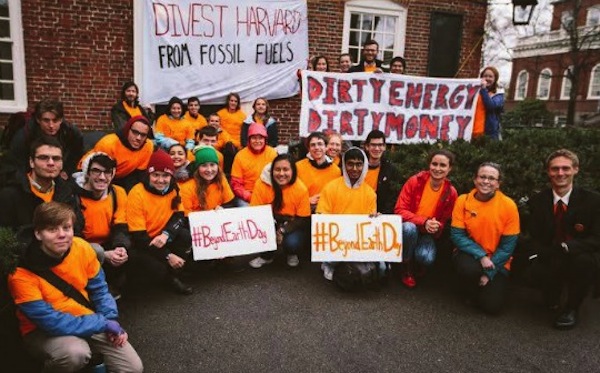 Demanding an open meeting to discuss divesting the school’s $30 billion endowment from fossil fuel companies, a group of Harvard students barricaded the doors to the school president’s office on Wednesday morning and have so far refused efforts by police to disperse.

“These guys are not going away!” declared noted climate activist Tim DeChristopher, speaking at a rally in front of historic Massachusetts Hall, where President Drew Faust’s office is located. The protesters say they will not move until their demands are heard.

“The fossil fuel industry is waging a war on truth by spreading climate denial and taking over our political system,” said Harvard Divest co-founder Chloe Maxmin, speaking before the crowd. “At Harvard our motto is ‘Veritas,’ our motto is ‘Truth,’ and we should be standing up for truth. Instead, we are complicit in this war on truth.”

In addition to the blockade, student-led group Divest Harvard is holding a Day of Action on Wednesday,  including press events and rallies featuring faculty members and community groups who are joining the students’ call to go ‘fossil free.’

Seventy-two percent of Harvard students support a referendum calling for divestment and more than 180 faculty and nearly 800 alumni have signed petitions in support of the campaign.

“These efforts have attracted the world’s attention, while our administration refuses to engage in public dialogue,” Maxmin wrote recently on BillMoyers.com. “Harvard has recoiled from a leadership role in the defining crisis of our time: climate change.”

Faust has responded to these calls by arguing that the institution should be “wary of steps intended to instrumentalize our endowment in ways that would appear to position the University as a political actor rather than an academic institution.”

Echoing a letter recently penned by nearly 100 prominent faculty member to President Faust, the students say: “If divestment is political, then investment is equally so.”

“The college divestment campaign has been catching fire across the country, with broad-based support by students and not a lot of response by administrators,” Henney Sullivan, member of the class of 2015 and organizer with Divest Harvard, told Common Dreams.

Sullivan said that if Harvard joined the handful of schools that have already pledged divestment it would “set a precedent for many other universities.” He added that other schools look to Harvard, which has the largest private endownment of any university in the country, as a model of what’s possible.

“We refuse to accept our university’s unwillingness to hold a public meeting on this critical issue,” the students declared in an op-ed published Wednesday.

Divest Harvard has launched a petition asking for worldwide support for their call to divest.