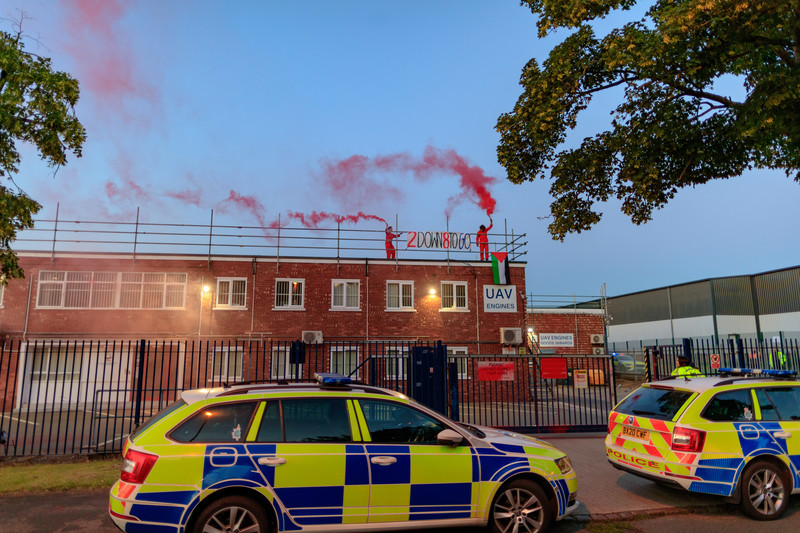 Has Britain Drafted A Law To Protect Israel’s Weapons Makers?

Above Photo: Palestine Action has forced Elbit Systems to leave two of the 10 sites from which it operates in Britain. VX Pictures.

Palestine Action has proven that the merchants of death are not invincible.

Just this week, it was confirmed that Israel’s top weapons exporter Elbit Systems is closing down its offices in London.

The decision follows numerous protests against Elbit and Jones Lang LaSalle (JLL), the letting agent for those offices.

It is the second time that Palestine Action, the group organizing the protests, has compelled Elbit to quit a site in Britain – a country identified by the firm as a priority for sales and investment.

Earlier this year, Elbit confirmed it had sold Ferranti, its subsidiary based in Oldham, near Manchester.

Palestine Action’s protests – which often involve smashing up weapons facilities – have angered Israel and its supporters.

One of Israel’s most influential backers in Britain is Priti Patel, the home secretary.

She has effectively declared war on Palestinian solidarity activists by claiming that the boycott, divestment and sanctions movement is racist – without presenting any evidence.

Patel has proposed new legislation which targets the kind of protests Palestine Action has undertaken.

The National Security Bill – as the legislation is called – gives the police powers to designate as “prohibited places” areas where an “aircraft, or a part of an aircraft, used for military purposes” or “equipment relating to such an aircraft” is located.

Following the sale of its plant in Oldham and the closure of its London offices, Elbit now operates out of eight sites in Britain.

Elbit-owned plants – which make engines for drones among other components – could conceivably be given a protected status once the legislation comes into effect.

Introduced to Britain’s Parliament in May, the bill has so far encountered little opposition.

Most elected representatives appear to either welcome how it would penalize direct action against the arms trade or have no concern about its likely implications.

The bill’s stated objective is to replace “existing counter-espionage laws with a comprehensive framework for countering hostile state activity.”

The approach being taken is so “comprehensive” that it is questionable whether the bill is really focused on spying in the conventional sense of that term. Many of its provisions could be used against ordinary people seeking to disrupt the weapons business.

The bill enables life imprisonment for anyone who obtains or discloses “protected information” and behaves in a way deemed “prejudicial to the safety or interests of the United Kingdom.”

Elbit describes itself as an “established supplier to the UK Armed Forces” and was recently awarded a contract to deliver surveillance drones to the British Army.

A section on “sabotage” in the bill is highly relevant to Palestine Action.

“Sabotage” is defined as “conduct that results in damage to any asset,” particularly if the purpose of that activity “is prejudicial to the safety or interests of the United Kingdom.”

Palestine Action is openly committed to damaging and destroying Elbit’s assets in Britain.

While many people have been arrested for breaking into Elbit’s plants in Britain, nearly all have been acquitted when cases have gone to court.

The only successful prosecution was against one activist, who was convicted of defacing a JLL site in the English city of Brighton.

The sentence given in that instance was a fine of less than $30 and conditional discharge for three months.

Under a conditional discharge, somebody convicted of an “offense” is released with the “offense” registered on their criminal record. No further action is taken if no other “offense” is committed within a stated period.

Elbit has displayed a reluctance to press charges against protesters – no doubt because the company fears that evidence about the use of its weapons in attacks on Palestinians will be produced in court.

The new bill could shield Elbit and other weapons makers from scrutiny.

For example, courts would be able to “exclude the public from proceedings” if doing so is deemed “necessary in the interests of national security.”

A Palestine Action campaigner argued that the British government is “running scared of the effectiveness of direct action deployed against Elbit.”

“If this bill is custom built to increase consequences for taking action against Elbit, as it seems to be, it clearly exposes the alliance between Britain and Israel’s apartheid regime,” the campaigner, who spoke on condition of anonymity, added.

“No matter what efforts they take to stop our campaign, we will not be moved. While the government wastes time legislating against us, Palestine Action will get on with the job of shutting down the remaining Israeli arms factories in Britain.”