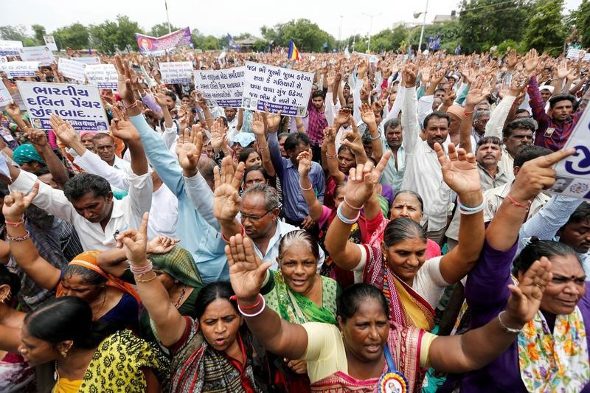 Has Dalit Uprising Given Birth To A Movement?

Note: Dalits are the lowest caste in India. The term Dalit has become a political identity. Dalits today use the term “Dalit” as they believe the term describes an identity born of struggle and assertion. – KBZ

While most of India was busy celebrating its 70th Independence Day, many people were trying to comprehend and make sense of a sudden Dalit uprising in Gujarat. Gujarati Dalits had begun a huge march for dignity and respect culminating in a rally on 15 August, Indian Independence day. They were demanding justice for four young Dalit men who had been stripped, tied to a car and viciously thrashed for hours in public on 11 July, by cow vigilantes, known locally as gau rakshaks, for skinning a dead cow.

Every single day I receive a report of collated Dalit stories. With sickening, mind boggling regularity I read about Dalits who have been raped, flogged, humiliated and murdered, every single day, in some part of the country. Yet this particular incident, the flogging of four young lads from the leather tanning community, for doing a job their forefathers have done ever since anyone can remember, that is, skinning two dead cows, created an uproar not just in Gujarat but in Dalit circles all over India.

Why, I asked Dalit leaders in Navsarjan Trust, an organization I have known for 25 years, did this particular incident get such an extraordinary response from the entire Dalit population of India? Manjula Pradeep, Director, explains: ‘We have worked on these issues of injustice and atrocities since the ‘80’s. So many of our activists are prepared to deal with situations when the issues emerge. They know how to file a first hand information report with the police, to meet the media, to support victims of abuse. They’ve studied the law. More than 30 years of work on the ground is paying off finally.’

Gagan Sethi, a veteran community organizer says, ‘It’s all about economics and power. The jealousy factor. There’s big money in disposing of bovine carcasses. Runs into millions. Young Dalit boys are tech savvy. With shiny new smart phones, they can ring up Kanpur or Kohlapur to find out the highest rates for leather or bone meal. The dominant caste men become incandescent with rage at the sight of Dalit lads racing around on bikes. Buying pick-up trucks’.

Martin Macwan, Navsarjan’s founder says: ‘Stories and photographs in newspapers never had any impact. But this time, the videos that the gloating gau rakshaks uploaded via social media, of themselves flogging the four Dalits, went viral. Every Dalit village, not just in Gujarat but all over India, could see these young boys being brutally, beaten up. Dalits have had enough. There was an explosion of anger.’

The anger took the form of unprecedented organizing in the state. Several Dalits, regardless of their party affiliation, with other supportive groups, came together to protest. Politicians of all hues arrived en masse, for their photo ops, the cynical were heard to mutter. Also, important elections were round the corner. National leaders came to commiserate with the lads and their families.

The march went determinedly on, though at some spots, dominant caste thugs, incensed that Dalits could dare to defy them, attacked a few people. That’s all in a day’s work for the average Dalit.

There has never been such a concerted show of Dalit strength before. Nor such a massive rallying together of Dalit sympathisers and supporters from trade unions, Dalit organizations, workers’ unions, youth groups and concerned individuals. Unusually, without political party money backing them, participants poured in from all over India. Dalit leaders from Punjab, Maharashtra, Bihar, Uttar Pradesh, Andhra Pradesh and Telangana came to show solidarity.

The question now being asked is, ‘has a movement been born’? Will this go on? Can they keep up the momentum? Only time will tell. Yet, the winds of change are definitely in the air. The younger generation are no longer illiterate. Nor will they take the abuse quietly like their fathers, cowed by centuries of violence. Social media works powerfully for them. Will India seize the moment to eradicate the curse of our nation?

With millions of other Indians, I fervently hope so.