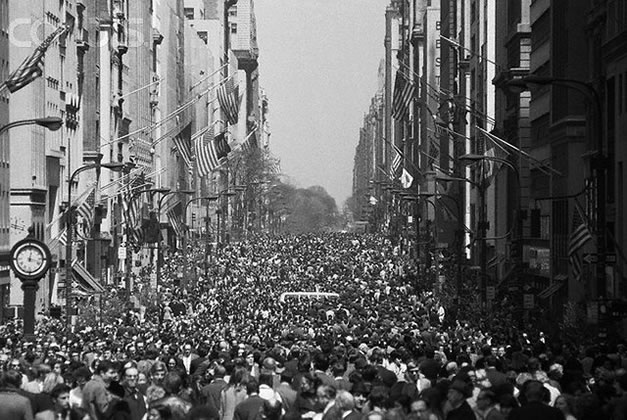 Has Earth Day Lost Its Way?

April 22, 2014  |  It probably has something to do with the fact that I’m one of the last sentimentalists standing in this ironic age, but I’ll admit that I get a little misty eyed when I think about the first Earth Day.

Do you remember it? Can you imagine it? On April 22, 1970 some 20 million Americans in cities and towns across the country turned out for a coordinated day of action to express their desire for a society that would live more conscientiously with this one and only planet. People picked up trash on beaches and in streams, they planted gardens, they organized and attended environmental teach-ins, they marched and chanted and sang. The whole thing was thought up a US Senator, Gaylord Nelson, and organized by a scrappy group of twenty-somethings. Elected officials had no choice but to stand up and get involved. At the Earth Day demonstration in Manhattan, New York Mayor John Lindsey told the crowd: “Beyond words like ecology, environment, and pollution there is a simple question: Do we want to live or die?”

I myself don’t remember (I wasn’t born yet), and can only imagine such a thing. Which is probably why I think of that first epic day of environmental activism in sepia-hued tones. To me it all seems sort of incredible – the scale (20 million people!), the involvement from the political establishment, the fact that it led, relatively quickly, to achievements like the Clean Water Act, Clean Air Act, and Endangered Species Act.

There are a lot of things that compete with Earth Day for the claim to have sparked the environmental movement: the fight over Hetch-Hetchy reservoir 100 years ago, the campaign to protect the Grand Canyon from dams, Rachel Carson’s Silent Spring, the oil spill off Santa Barbara (which did, indeed, inspire Senator Nelson). Still, there’s no question that the organic outpouring of citizen energy that was Earth Day helped to mold an emerging worldview into a real political force.

I might have come late to the party, but Earth Day also molded me. I remember clearly the very large, and very hopeful, Earth Day celebrations in 1990 marking the twentieth anniversary of the original demonstrations. I was 15 years old. My parents took my sister and me to the Earth Day gathering at the Arizona State Capitol. It was probably the first even vaguely political event I had ever been to (my parents weren’t activist types then, though they are now, I’m proud to say). I don’t know how many people were there, but certainly it was thousands upon thousands, which has to be something of an environmental victory in a place like Phoenix. There were lots of speakers and bands and tables full of information. I remember a lot of speeches from the stage about the destruction of the Amazon rainforest.

The event changed my life. It wasn’t long before I was waging my first environmental campaign: an effort to get my mother to ditch the disposal paper napkins we used at each meal and buy cloth napkins. The campaign was a success – she bought a nice selection of cloth napkins – and I didn’t even need to lock my head to the kitchen table.

All of this is my rather self-indulgent way of explaining why I get a little depressed every spring when Earth Day rolls around. Sure, there are plenty of Earth Day-inspired activities that keep alive the flame of that first protest. San Francisco had a pretty groovy event on Saturday, complete with a rousing march led by Bill McKibben. Tonight in Seattle there’s an “Orca Freedom Concert.” And the good folks at the Earth Day Network continue plugging along to keep this secular holiday meaningful (even if some of the corporate sponsors give me a cognitive dissonance migraine).

Still, I can’t shake the feeling Earth Day has become diminished, has lost some of its original spirit somewhere along the way. This probably has to do with the fact that, being in the environmental news business, I get a lot of inane Earth Day related press releases.

Clearly, something has been lost in translation. For example:

To belatedly answer Mayor Lindsey’s question, by the time I got to the Sports Suds release, I kind of wanted to die. Some years it can seem that Earth Day isn’t any more green than St. Patrick’s Day.

I probably shouldn’t be such a humbug. I like wine (especially when produced with organic grapes). I eat cupcakes, and would be happier doing so if some of the proceeds went to conservation efforts. I have to wash my clothes somehow. It’s awesome that Soda Stream is trying to raise awareness about plastic pollution.

In a way, the corporate co-optation of Earth Day is a success. It reveals that caring about the environment, if only for a day, has gone mainstream. And, in any case, the beauty of the first Earth Day wasn’t that it was oh-so-radical, but rather that it was so very accessible to all kinds of people. There were plenty of ways to plug in.

What I miss, I guess, in my unlived nostalgia is the edginess of those earlier Earth Days. Encouraging easy, everyday actions that benefit the environment is fantastic – as long as they take someone further down a path of commitment to sustainability. And that’s what I fear we’ve lost. Earth Day, I’m sorry to say, no longer feels like a spark, but rather an echo.