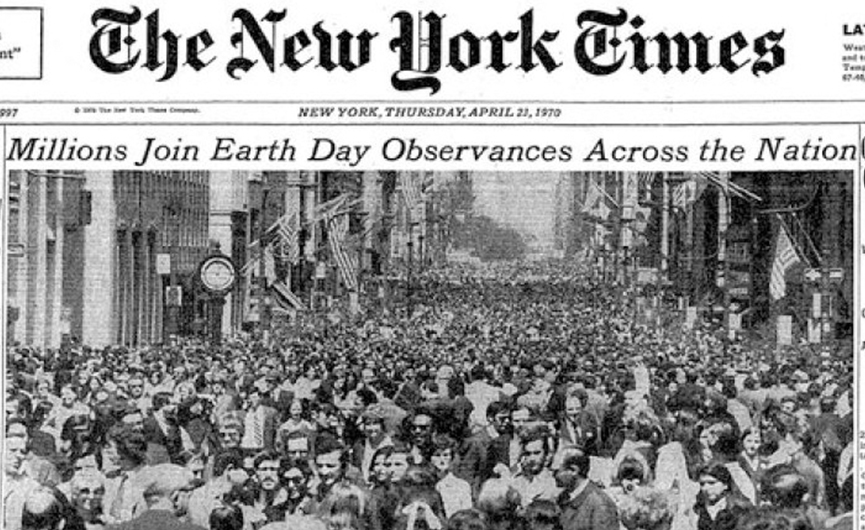 Has The Environmental Movement Peaked Or Best Days Ahead?

Note: It is perfectly understandable to be cynical about Earth Day. The planet has certainly gone done in many ways since the first Earth Day in 1970. In our weekly newsletter, Earth Day Conflict Over Future of the Planet, we begin by describing the terrible state of the planet summarizing a thorough article, Junk Planet. And, the conclusion of the article is right “We have a lot of work to do.”

It is hard to be optimistic when the elites of the country and those in power in government continue to put profits of polluters ahead of the urgent need to protect the planet and reverse the damage we have caused as well as win so many deny the existence of climate change while it is causing immense damage, and loss of life.

But, at the same tens of thousands of people are taking aggressive action to protect the Earth and develop new systems of agriculture, energy and other making other changes. People are following the two-track path of working to stop the machine and create a new world.

When the undertow of resistance grows those profiting from the status quo become even more aggressive. It is impossible to tell when we are in the midst of transformation when the undertow will become dominant. We have predicted that the 2020s are going to be a decade of progressive transformation because the movement has grown, the issues are reaching a climax and national consensus for change is developing. But, we only get there is we do the work. We urge people who want to make transformational change by building the power of the independent political movement to sign up for the Popular Resistance school that begins on May 1.

The article below describes the peak of Earth Day as the large marches covered by national media. In our view of social movement development, those are the take off moments when people put a new issue on the agenda. Take-offs are preceded by years of the issue developing before enough people are ready to take action. And, they are followed by years of building a national consensus. The development of the movement does not happen in a vacuum. There is pushback by the power structure. This is especially true when the people’s movement is challenging immense profit centers, as environmentalism does. Some credit the Powell Memo, the memorandum that described the big business response to the 60s and 70s, which was written shortly after the first Earth Day, as being inspired by the Earth Day Protest and the creation of the EPA, passage of the National Environmental Policy Act and strengthening of the Clean Water Act. KZ

As someone who has followed these issues since the first Earth Day in 1970, April 22 is a perpetual mixed bag. Of American origin and still almost exclusively observed here, the day is a festival of good intentions – the metaphorically Earth-friendly pavement for a road to ecological Hell.

Throw in Rodney Dangerfield to measure the lack of respect we show to the planet.

Ten years ago, Jeffrey Ball wrote this in the Wall Street Journal: “Launched in 1970 as a protest against corporate environmental misconduct, Earth Day has become a planet-hugging marketing frenzy for companies themselves. Makers of everything from snack chips to sport-utility vehicles now use April 22 to boast about their efforts to help save the planet.”

Politicians have used the day for their own agendas as well. James Inhofe is the climate-denying Senator from Oklahoma who is arguably the most anti-environmental legislator in American history. In 2015, while Chair of the Senate Environment and Public Works Committee, he observed Earth Day with a facepalming statement that both saluted environmental gains through new laws, and condemned any future efforts for further positive steps as trillion-dollar, job-killing “scare tactics.”

Back to baseball, and other pro sports, for a moment. Here in the Atlanta area, we were blessed with three relatively new, perfectly serviceable pro sports palaces built in the 1990’s. The football stadium was senior of the three, functioning for just short of 25 years. Nine years before demolition, the Georgia Dome got a $300 million facelift. Turner Field was born as the 1996 Olympic stadium, then stood for 20 years as a baseball park before conversion to a much smaller college football field. Philips Arena, the venue for basketball and other indoor events, opened in 1999 and is in the midst of a $200 million renovation.

Baseball’s Atlanta Braves now play in the suburbs, at a location nearly devoid of public transportation. All told, the three sports palaces have sucked about two and a half billion dollars out of a mix of public and private funds to replace or refurbish buildings that didn’t need replacing. The vast expenditure of resources isn’t environmentally canceled out by recycling every last food wrapper or switching to LED lighting. These are places where Earth Day celebrations ring particularly hollow.

But bear in mind here, I’m the cynic – not those who are at least devoting a day, a gesture, to protecting the planet. Taken alone, the tree plantings, recycling drives and trash pickups are unassailably good things. Taken as part of the big picture, they hardly represent what is needed to turn us away from a planetary shipwreck.

They may even be a bad thing, an anodyne way to relieve guilt without treating our huge planetary symptoms.

This year’s Earth Day focus, as coordinated by an NGO called the Earth Day Network,is the tsunami of plastic waste entering our oceans and changing their ecology. Such a focus may be the best use of an annual Earth Day ritual whose impact seems to be fading.

Forty-eight years ago, The Most Trusted Man in America summed up the first Earth Day with words that are just as apt today: “Those who ignored Earth Day, well, that’s one thing. Those who ignore the crisis of our planet, that’s quite another. The indifferent have missed the point: That to clean up the air and Earth and water in the few years science says are left to us means personal involvement, and may mean personal sacrifice, the likes of which Americans have never been asked to make in times of peace.”

Imagine a network in 2018 pre-empting an hour of primetime sitcoms, cop shows, or reality TV to report on the environment. For that matter, imagine 1970’s “Most Trusted Man in America” landing a network news job today. In government, the most powerful voices on the environment are those that deny basic science and show contempt for government’s role in regulating environmental harm.

So Happy Earth Day, y’all. We’ve got some work to do.

A U.S. Senator ridicules a legitimate, but odd-sounding science study. Here’s what we learned from “synchronized swimming of sea monkeys.”

What will America look like in 10,000 years? Take this climate quiz, courtesy of the New York Times.

Tired of waiting for his power to be restored, this man built his own solar power system. (CNN)

Thousands of Deepwater Horizon spill cleanup workers haven’t yet gotten their day in court for illnesses that may be linked to their work. (WWL-TV, New Orleans)

Umar Irfan and Emily Barclay of Vox.com on what we’ve learned since the last Earth Day.

If I were writing on ways you can help save the earth on Earth Day, I probably wouldn’t have led with playing National Geographic’s Earth Day Spotify playlist. But I digress……

Editorial from the Lansing (MI) State Journal: Earth Day 2018 is more important than ever.

Trump Administration keeps litigators off the Endangered Species list. NRDC has sued the Trump White House an average of once every eight days. (Fast Company)

The New York Times travels to Oklahoma to report that Scott Pruitt’s lavish spending didn’t start when he got to Washington.

Bloomberg’s Jen Dlouhy on how EPA Administrator Scott Pruitt’s “cone of silence” scandal has taken on a life of its own.

Ohhhhh, it’s on: The Trump Administration has pissed off the Girl Scouts on coal ash. (WCIA-TV, Champaign, IL)

Scott Pruitt is on Time Magazine’s list of 100 most influential people. His predecessor as EPA boss, Christie Todd Whitman, writes about him. It isn’t pretty.