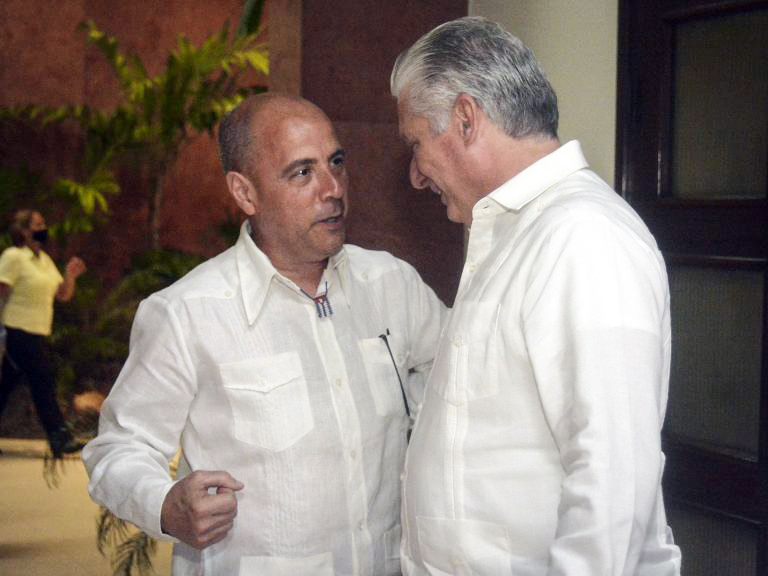 Marco Rubio has done it again. The man famous for slandering and being ashamed of his Cuban and Latino roots once again made a fool of himself before the world by requesting the Federal Bureau of Investigation (FBI) to conduct an “immediate” inquiry into the ties between the U.S.-based solidarity group Puentes de Amor and Cuba.

The Florida senator believes it is highly suspicious that Carlos Lazo, who founded and currently coordinates the group, is meeting with authorities on the island. The movement has traveled to the Caribbean country dozens of times with health supplies and food, especially during the hardest months of the pandemic.

According to Rubio, it is inadmissible that Lazo has met with Cuban leader Miguel Diaz-Canel at two very recent moments, in June of this year and August of last year.

“The FBI should recognize the group and its members for what they are: a malicious foreign group within the United States, and conduct investigations of individuals who may be acting as foreign agents of the Cuban regime,” the senator wrote in a dismissive letter to the FBI.

It was not enough for Rubio to urge the FBI to conduct an investigation that seemed almost like he was asking for a personal favor, he also attacked Joe Biden, for implementing the very minimal measures in May, aimed at slightly de-escalating the hostilities that Washington maintains against Havana.

It should be remembered that not only does Rubio know nothing about the suffering the Cuban people are facing or the realities of Cuban life. He was born in the US after his family fled the Batista regime in 1956 and has never set foot on the island, instead, he has made hate against Cuba the cornerstone of his political career. One might think that with the level of deterioration of living conditions for a growing number of people in the US that he would have better things to be doing.

Bridges of Love, was registered in the state of Washington as a non-profit organization in November 2020, a few months after the COVID-19 outbreak. Since then, it has been advocating against the 60-year-old blockade imposed on the island, which was not relaxed even one millimeter during the health crisis, a combination that caused and continues to cause shortages, food insecurity, and other hardships for the Cuban people.

In these last two years, the members of this movement have carried, in their own hands, syringes for Cuban hospitals, while they were overflowing with infected people; food to be distributed among the most vulnerable; medicines to start up vital programs such as children’s liver transplants… Cuba was not alone in those difficult moments because of Bridges of Love, and many other solidarity movements across the world.

“Are you blind? Are you deaf? Have you lost touch with reality? I tell you that, just 90 miles from our shores, they are trying to suffocate, kill, and eradicate from the face of the earth a peaceful and noble people,” Lazo wrote on the organization’s blog. “For more than 60 years, the United States has waged an economic war against Cuba. That war generates poverty, death, and desolation in the Cuban family.”

The Cuban American activist formally responded to Marco Rubio in a brief but forceful letter. “I want to thank Senator Marco Rubio. I never thought that a U.S. Senator would look at our movement and elevate us as he has, calling for an investigation of Bridges of Love and its members”. He is right why would he bring more attention to this humanitarian project? Could it be the 2 years of constant monthly protest to lift the blockade in Miami and cities throughout the US?

Ironically Lazo has been in contact with the FBI for several months now, because he has received death threats, against him, against his family, and the FBI has been aware of this for a very long time.

“So, I welcome any investigation. We act transparently. I am a teacher, a U.S. war veteran, who did the most I could have done for my adopted country, the United States. And I wonder what Senator Marco Rubio has done in that sense, besides speaking there in the Senate and almost always taking the side of sad causes for the people of Cuba and the United States and for humanity, such as asking for more blockade for Cuba or that family members cannot visit each other,” the activist wrote.

The senator has accused him of meeting with President Diaz-Canel like it was a crime. “I will meet with whomever I have to meet with to ask that the sanctions against the Cuban people be lifted and to ask for better relations between my native country, Cuba, my mother, and my adopted country, the United States, my father.”

Lazo asked the media to make his response public while assuring that it’s probably others who would have to be concerned with an FBI investigation.

“What has been our “crime”? Carrying powdered milk for the pediatric hospitals? Carrying syringes for the pandemic vaccination campaign? Carrying medicines so that liver transplant operations can be performed on Cuban children who need it? This is what we do and what many, many other organizations do,” he assured.

“The sanctions that punish the Cuban people must be lifted. A future of love and understanding is possible between the people of Cuba and the United States. Love will overcome hate. Sooner rather than later, we will build those Bridges of Love,” he concluded.

How could Cuba, its people, and its leaders not feel enormous gratitude for that group and its founder? Our appreciation for them will be eternal, especially amid so much hostility towards any hint of affection towards Cubans, who suffer the devastating consequences of the hatred of a few.