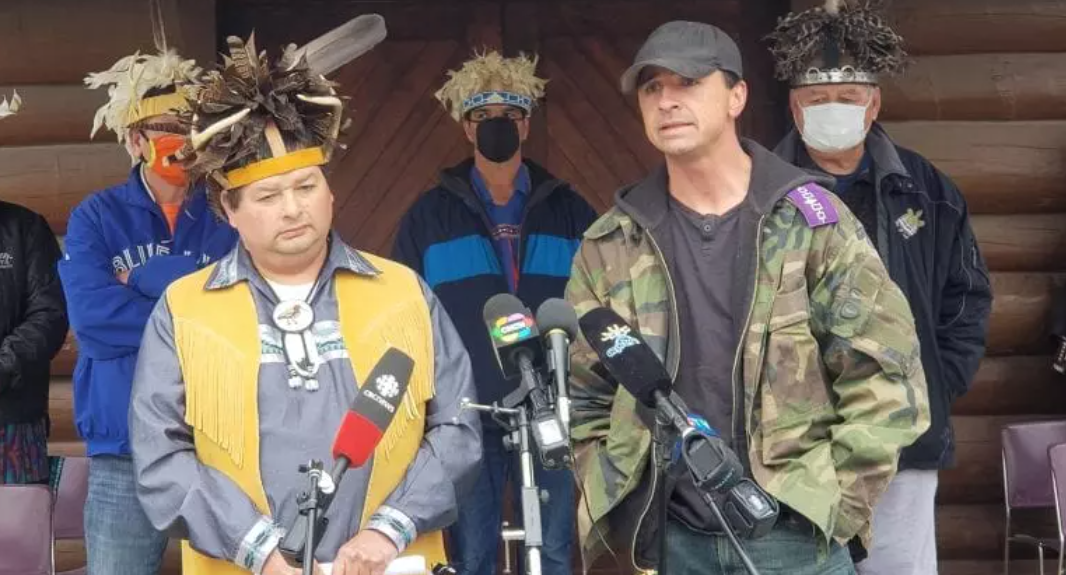 Above photo: Deyohowe:to Roger Silversmith and Skyler Williams outside the Longhouse on Six Nations of the Grand River territory. Photo: Steve Mongeau/APTN.

Traditional Six Nations chiefs have declared a formal moratorium on development within the Haldimand Tract, a broad swath of land spanning 10 kms from either side of the Grand River as it winds its way from Dundalk, Ont. down to Lake Erie.

Standing outside the Longhouse, the Haudenosaunee Confederacy Chiefs Council said construction can’t proceed without the people’s consent — doubling down on their support for the land reclamation in Caledonia that now enters month 10.

“The Haudenosaunee Confederacy Chiefs Council endorses, supports and recognizes that development should not be proceeding on our lands,” Deyohowe:to Roger Silversmith, Snipe Clan chief of the Cayuga Nation, told reporters on Tuesday.

“The Haudenosaunee Confederacy chiefs and clan mothers continue to support the efforts and stand behind our people who are protecting our land rights.”

The British Crown treatied the disputed territory from the Mississauga Nation and granted it to the Haudenosaunee (also known as Iroquois or Six Nations) in 1784 as payment for their military support during the American Revolution.

Roughly half a century later, settlers were flowing freely into the Grand River tract, and the Crown began pressuring the Haudenosaunee to surrender.

“Our ancestors faced overwhelming odds, relentless pressure to give up our lands,” explained Deyohowe:to. “We all know that unscrupulous measures were employed to coerce our ancestors into selling the land. At other times, outright fraud took place.”

The Crown obtained surrender documents in 1841 and 1844, but the legitimacy of these transactions has been disputed. The traditional chiefs and the 1492 Land Back Lane group maintain the land is unceded.

The present reserve boundaries were set in 1850. It comprises less than five per cent of the original grant. Community members began taking direct action to reclaim land in 2006.

Today marks the 15-year anniversary of an Ontario Provincial Police raid on the occupation of the Douglas Creek Estates development in Caledonia, which has since been renamed Kanonhstaton.

That dispute is not only unresolved but expanded. Kanonhstaton is linked to Land Back Lane — which was raided in August 2020 — by an unopened dirt road.

The OPP defended the expenditure, noting that there were tires set on fire, roads ripped up, train tracks wrecked, a hydro pole burnt and blockades manned for weeks.

Skyler Williams, spokesperson for the group, said the provincial and federal governments could have saved themselves a lot of money had they sent someone to negotiate early on.

“To spend $90,00 a day in order to police that? Which could’ve been remedied with $60 in gas from Queen’s Park or maybe $100 in gas round-trip from Ottawa?” remarked Williams.

“There was an easy pathway forward here. And there was absolutely no reason whatsoever that we’re in this situation nine months later, or 15 years later when it comes to Kanonhstaton.”

Matt Green, NDP MP for nearby Hamilton, joined Williams and the chiefs for the announcement. He’s one of the group’s more high-profile supporters.

He raised the issue in the House of Commons multiple times and visited the site last summer, something the developer complained to police about in letters obtained by APTN.

He too slammed the feds, calling the situation an “abject failure of this government to negotiate in a good way, nation to nation.”

He said governments and developers need to prove they own the land.

“Justice delayed is justice denied,” said Green. “Until these governments, until these developers can provide clear title to these lands, then they are in fact engaging in a de facto dispossession and land theft.”

The builder Foxgate Developments has returned to the courts to try and do just that.

Foxgate seeks a court order “directing that Ontario and Canada confirm that the Lands are not subject to a land claim by any Indigenous group, including any member of the Six Nations of the Grand River (“Six Nations”), that could impact title to the Lands held by Foxgate,” according to the April 15 statement of claim.

In addition, Foxgate’s owners — Losani Homes and Ballantry Homes — claim their reputations have been tarnished by what they allege is Crown negligence and failure.

“The result is that the Losani Homes’ family and companies have now been branded by the general public as having stolen the land from Indigenous persons,” said the court filing. “The reputational damage of that perception is permanent and catastrophic to the family name.”

These issues have already been the subject of substantial litigation in the form of injunctions.

The traditional chiefs and their development wing, the Haudenosaunee Development Institute (HDI), have been named in various motions as a result of efforts to assert jurisdiction over property, hydroelectric and pipeline development within the territory.

A judge wrote in 2008 that the traditional chiefs and HDI were “asserting that they have the right to give or refuse permission to develop a subdivision in the middle of the village of Cayuga, on land that the Six Nations surrendered to the Crown 160 years ago.”

The court continued, “Looking at it realistically, it is tantamount to a claim of sovereignty. The special rights enjoyed by the aboriginal communities under our constitution do not include sovereignty.”

Another judge concluded that the 1844 surrender was valid, at least when it came to contested land in the city of Brantford.

“The respondents’ claim for title or the return of the lands in question was exceedingly weak,” wrote the judge after considering competing expert reports in 2010.

“For more than 150 years, the Six Nations had done nothing to indicate to innocent third-party purchasers that there was any problem with title to their lands.”

The judge also cited case law from the Chippewas of Sarnia Case, now known as Aamjiwnaang, which was concluded 21 years ago.

The appellate court concluded that land in present-day Sarnia was taken illegally from Aamjiwnaang but that the community could not have the land returned because “innocent third parties” had assumed the original Crown land grant was valid.

The court wasn’t willing to interfere with private property rights, especially when the land was acquired by others “in good faith for good value,” which left the Chippewas with a damage claim against the Crown.

The Six Nations elected council launched a similar claim for damages in 1995, and a trial is supposed to begin in the next couple years.

As for the traditional chiefs, their laws understand land rights as a sacred trust invested in the collective and not private parties, Deyohowe:to explained.

They don’t acknowledge Canadian jurisdiction and have little faith the courts will bring them justice.

“That’s where the big problem lies.”