Haul No! Awareness And Action Tour 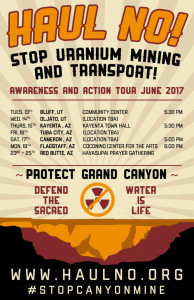 Haul No! is an awareness & action tour that will be held in Spring 2017 along the proposed uranium haul route of the Canyon Mine (owned and operated by uranium production company Energy Fuels Inc.). We intend to spread awareness and stimulate action to ensure sacred sites, the Grand Canyon, and our communities are safeguarded from this deadly toxic threat.

The Haul No! tour is free and open to the public.

What is the Canyon Mine?

The Canyon Mine is a uranium mine located near Red Butte, a sacred mountain and Traditional Cultural Property only six miles from the Grand Canyon’s South Rim. Canadian company, Energy Fuels, is currently sinking the mine shaft and plans to extract uranium in early 2017. The company is operating under a Plan of Operations and Environmental Review that date to 1986, and the Forest Service failed to properly consult with the Havasupai Tribe before allowing the mine to operate.

The Havasupai Tribe, Grand Canyon Trust, Center for Biological Diversity, and Sierra Club have legally challenged the United States Forest Service’s decision to allow Energy Fuels Resources to reopen the Canyon uranium mine, which was initially approved in the 1980s and had been closed since 1992.

Red Butte is located in the Kaibab National Forest in Coconino County, Arizona on ancestral Havasupai lands. It is known to the Havasupai nation as Wii’i Gdwiisa, “clenched fist mountain,” and has been held sacred since time immemorial.

An estimated 40 million people rely on water from the Colorado River which flows through the Grand Canyon. Already, 20 seeps and springs in the Grand Canyon region exhibit dissolved uranium concentrations over safe drinking water standards as a result of historic uranium mining. The Canyon Mine threatens to further those impacts, and the haul routes travel over two key Colorado River tributaries – the San Juan and Little Colorado.

What is the White Mesa Mill?

The White Mesa Mill is the only conventional uranium mill licensed to operate in the United States. Energy Fuels Inc. owns and operates both the mill and the Colorado Plateau uranium mines, including Canyon Mine, that supply ore to the mill. The mill is located three miles north of the Ute Mountain Ute Tribe’s White Mesa Ute community and six miles south of Blanding, Utah.

What are the tailings impoundments?

What are the health and environmental hazards?

What are other community concerns?