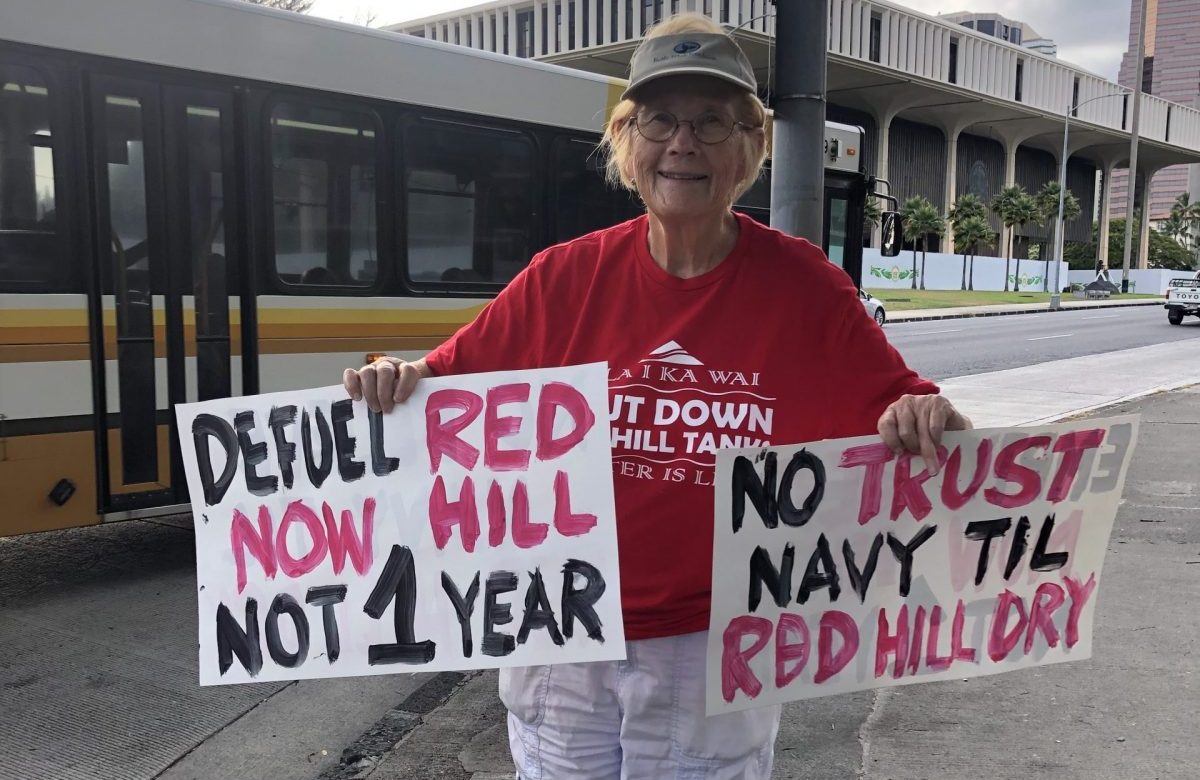 After stalling for decades in addressing the dangers of the massive Red Hill jet fuel storage facility in Honolulu, in a surprising move on March 7, Secretary of Defense Lloyd Austin ordered the leaking 80-year-old jet fuel tanks to be drained of their 180 million gallons of jet fuel and the facility permanently closed.

The decision comes after years of protest by the community and endless warnings by the Honolulu Board of Water Supply that the continued leaks in the tank system, which includes twenty 20 story tanks and tens of miles of pipes, was headed for a catastrophic leak that could endanger the water supply of Honolulu which is located only 100 feet below the tanks that were built in World War II.

The predicted massive leak occurred in November 2021 and contaminated the drinking water of 93,000 persons, including many of the military’s own families.

In response to the Department of Defense decision to permanently close the Red Hill jet fuel tank facility, Sierra Club-Hawaii and Earthjustice, two organizations that have led the legal challenge to the military’s continued operation of the leaking tanks, called on the Navy to “withdraw its (legal) appeals of the Department of Health’s emergency order requiring defueling of the Red Hill tanks and withdraw its application for a permit to keep operating the polluting facility.”

“Admitting you have a problem is just step one in the journey to fixing it,” said Wayne Tanaka, Sierra Club of Hawai‘i’s chapter director. “We all need to continue to hold the Navy accountable not just in this promise to defuel and shut down Red Hill, but to address the harms that have occurred and will continue to occur due to the mess it created, and to provide us with the resources necessary to pull us out of the ongoing contamination crisis.”

“For years, the Navy has been telling us that the Red Hill facility is vital for national security and irreplaceable. Now, the Secretary of Defense has done a 180 and concluded that the facility is out-of-date and that, in the 21st century, there are much better ways to supply the military with fuel. This just goes to show that we really need to take a healthy dollop of salt with the military’s claims that its decades-old, environmentally destructive ways of doing things are necessary to defend the nation.”

O’ahu Water Protectors, one of the major citizen activist groups that organized numerous press conferences, educational webinars and sign-wavings, demanded that the Red Hill facility be defueled and shut down as soon as possible as fuel in the tanks present an imminent threat to Honolulu’s aquifer and that DOD  pay for remediation of the aquifer and contaminated sites, including surrounding environment and replacement as needed of all impacted infrastructure including full reimbursement to the State of Hawaii and County of Honolulu.  They also call for the reimbursement to affected families for all current and future healthcare costs and all personal expenses connected to the Navy’s water contamination and establishment of  a Community Oversight board.

Camille Kalama, an organizer for Ka’ohewai, a coalition of Hawaiian organizations that came together for Kapukaki or Red Hill, said “This is a first step.. the decision has been made but the actual, defueling, decommissioning, and rehabilitating the surrounding area is going to take time. We are committed to seeing that through…we are going to stay in communication, demand and request information to be shared with us on this process because the last thing we want is for this to fall out of the news cycle, people to forget, and years later another spill happens, more people are sick.”

Kawena’ulaokala Kapahua, a community organizer for O’ahu Water Protectors, said “We’ve seen examples in the past of the Navy saying they are going to stop an operation and then they don’t…It’s taken months, years, of community pressure and community work to get the Navy to be held accountable here and so it’s going to take the community continuing to stick up for ourselves to have a safe place to live and drink water.”

The Shut Down Red Hill coalition of over 60 organizations applauded the DOD decision with various organizations issuing statements of support.

Over time, the walls of the World War II  tanks had deteriorated to the thickness of less than a dime and could not withstand the pressure of a completely filled tank. The network of pipes was so old that no one knew where all the pipes were.  The lack of knowledge of the entire system became dangerously obvious in November 2021 when a series of mistakes, including not know that an overflow drainpipe drained into the Red Hill well,  released an estimated 19,000 gallons of jet fuel into the Red Hill drinking water.  Surveillance cameras in the facility had not worked for over a year so there was no operator observation of the incident and no immediate action taken to attempt to remediate the leak.

The contaminated Red Hill well provided the drinking water for over 93,000 persons who live in residential area on military bases and the surrounding civilian neighborhoods, as well as to many of the national security facilities at Pearl Harbor Naval Base and Hickam Air Force Base.

Unknown to them that there was a jet fuel spill, during November 2021, thousands of military and civilian family members went to emergency rooms with rashes, headaches, hair loss, burning skin and throats, vomiting, motor disfunction and other neurological issues all consistent with petroleum poisoning.  Three months after families began suffering from jet fuel poisoning, the military still has not brought in any toxicologists nor have they established a laboratory on-island to provide immediate answers to families about jet fuel poisoning.  Pets were affected as well.

Finally, to get the families out of the contaminated housing, the military relocated thousands of their families into hotels in Waikiki.  Civilian families had to find alternative housing at their own expense which was a warning to the 400,000 civilian residents of O’ahu who water comes from the same aquifer, that if a Red Hill jet fuel spill contaminates the entire aquifer, civilians would not receive any assistance from the military and would have to rely on scare state resources.

By mid-December 2021, two weeks after the jet fuel spill, the military embarked on a massive “flushing” of the main water systems of all nineteen affected zones.  Initial flushing was controversial as some of the jet fuel contaminated water was directed into storm drains that went directly into the ocean while other contaminated water went into sewage drains with sewage plants left to try to decontaminate the water.  Finally, very large carbon activated filtration units were flown in from the continental United States to decontaminate the water before it was sent into storm drains and sewage lines.

With the main lines flushed, a massive movement of young military personnel from all services -Navy, Air Force, Army and Marines-were deployed to go house to house to “flush” the lines in each home.  Each water tap in kitchens and bathrooms and every appliance that used water including dishwasher, clothes washing machines and water heaters were to be “flushed.”  As reported by many families, not all teams knew what they were doing and family members reported that not all appliances were flushed and water coming out of taps still smelled of fuel and had surface sheens.

Families have had to throw away plastic eating and drinking materials as the fuel can seep into the plastic and will not come out with soapy water as was first advised.  Plastic parts in ice makers and other appliances should be replaced, generally at the expense of the family.

However, some families report that upon returning to their homes and drinking the water, symptoms of fuel contamination return.

The Honolulu Board of Water Supply has already warned that residents of O’ahu that they may be required to reduce water consumption during the summer because of drinking water wells being taken off-line to prevent their contamination by the jet fuel.

The Secretary of Defense ordered that jet fuel tanks to be drained within a year after the May 31 assessment, which could be 15 months after the order, not 12 months.

Activists fear that the Department of Defense will “slow roll” its decision by possibly declaring a national security threat that can only be addressed by keeping the Red Hill fuel tanks open on a “temporary” basis that could last years.

Residents of O’ahu remind the US military that as residents on an island filled with four major military bases that are considered to be vital national security facilities, that the health and safety of the inhabitants of the island must be also be considered as a vital national security imperative even more important than the international political issues of the region.

Without the health of the work force on the island of O’ahu, the U.S. military could not fulfill its national security mission.

Ann Wright served 29 years in the US Army/Army Reserves and retired as a Colonel.  She also served as a US diplomat in US embassies in Nicaragua, Grenada, Somalia, Uzbekistan, Kyrgyzstan, Sierra Leone, Micronesia, Afghanistan and Mongolia.  She resigned from the US government in March 2003 in opposition to the US war on Iraq.  She has been a resident of Honolulu for 20 years and has written frequently on the dangers of the Red Hill Jet Fuel storage facility. She is the co-author of “Dissent: Voices of Conscience.”