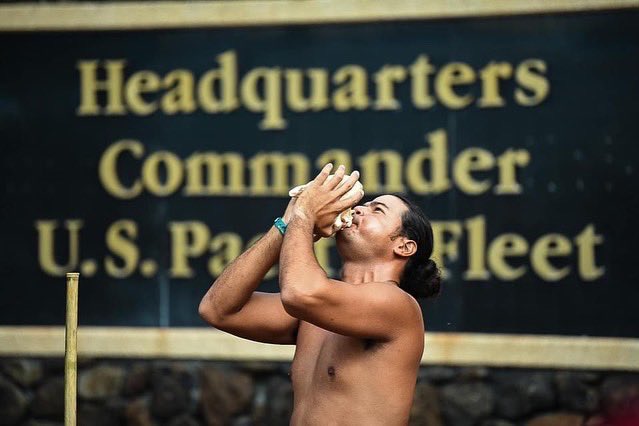 Above Photo: An action in front of the headquarters of the U.S. Navy Pacific Command. Greg Noir / Twitter.

In the wake of a major leak by the Navy that contaminated O’ahu’s water supply, water protectors found unlikely allies among outraged military families.

Upwards of 100 water protectors rallied outside the Hawaii State Capitol in Honolulu on Dec. 10. Their greatest fears had just come true. The U.S. Navy had kept decaying fuel storage tanks just 100 feet above a water aquifer that functioned as the main source of drinking water on the island of O’ahu. Those tanks recently leaked jet fuel into the aquifer, poisoning thousands of people and creating irreparable damage to O’ahu’s water supply.

Shelley Muneoka, a Kanaka Maoli (Native Hawaiian) member of the O’ahu Water Protectors coalition of organizers and community members, has been warning of such a leak since 2014. She spoke about the surge in attention that water protectors have recently received from the larger O’ahu community.

“On the one hand, [we’re] really feeling devastated that it’s come to this and really scared for what this means for the future of life on O’ahu,” Muneoka said. “On the other hand, [we’re] really having to dig deep to activate and motivate. All of a sudden, every day, tons of things are happening.”

Public demonstrations and community outreach throughout Honolulu are being led by the O’ahu Water Protectors. The coalition has been growing support around a demand to “Shut Down Red Hill,” referring to the Red Hill Bulk Fuel Storage Facility, which is the official name of the complex of underground tanks.

So far they have held two high profile actions and are engaging with members of the local community through teach-ins and mutual aid in order to bolster local support for their demand. They have also been active on social media to draw public attention to the issue. Community support and attention from the public is especially necessary because the Navy has resisted demands and dodged accountability at every turn, even fighting a state order to defuel Red Hill issued on Dec. 6.

Concern first started growing over the tanks at Red Hill in 2014 because that is the first known case of a major leak. In January 2014, 27,000 gallons of fuel leaked from a single tank, prompting a 20-year agreement between the Environmental Protection Agency, the Navy, the Defense Logistics Agency, and the Hawaii Department of Health to study and consider improvements to the facility.

Despite this agreement between various governmental organizations, the Environmental Protection Agency and other departments responsible for holding the Navy accountable have not followed through, according to the Sierra Club.

The lack of action from federal and state institutions prompted the Sierra Club to wage a legal campaign that won some major gains in accountability. In 2017 the environmental organization sued the Hawaii Department of Health over a policy that exempted Red Hill from usual underground tank storage regulations. Prior to opposition, the Navy’s permit to operate the tanks was automatically renewed anytime it expired. The Sierra Club’s work forced the state to drop the practice of automatic renewal. The organization has also been using its website to document and clearly convey all available data and studies into the environmental threat posed by Red Hill.

Although the precedent of a major leak was set more than half a decade ago, the demand to shut down Red Hill lacked public support. Much of that hesitancy to question the Navy comes from the military’s large role in the Hawaiian economy and the concentration of service members and veterans who live on the island. The military industry is the second largest economic driver in Hawaii, employing 101,500 people or 16.5 percent of state’s workforce.

In Honolulu Civil Beat, Eric Stinton writes about how the military has been able to avoid significant criticism by portraying any negativity toward it as an institution as condemnation of individual service members.

“Even mild critiques of the military are often met with patriotic outrage, as if a specific institutional criticism is no different than spitting in the face of your uncle who took a bullet for his country,” he explained. “Military culture is particularly effective at subsuming the identities of those who are in it, so it’s easy to understand why criticism of the military is often received as criticism of military members.”

Antiwar veteran and O’ahu resident Ann Wright, who has been active in the Shut Down Red Hill movement, says that the economic role of the military has kept the state government complacent with the Navy’s presence.

“Besides tourism, it’s Department of Defense money that runs the state, so all of our Congress people are the big pork barrel people getting military projects here,” Wright said. “So the state has gone along with it and has not really kept good investigations going and made sure permits are issued.”

While the Navy has long manipulated public sentiment and worked with state officials to skirt responsibility, it was not able to avoid backlash following another major leak from the Red Hill tanks in recent months. That is because this time around the Navy is facing a new type of opposition: its own service members and military families living on the Joint Base Pearl Harbor-Hickam. After posing a threat to the average O’ahu resident, the tanks have now leaked so much that military families living in Hawaii have been poisoned and outrage is finally growing.

Towards the end of November military spouses living in housing communities around the military base began reporting that they could smell gasoline in their water. Families also reported symptoms including headaches, rashes and diarrhea. Initially Navy spokespeople ensured the families that the water was safe to drink. They were only able to maintain this line for so long.

“If it had been over at the part of town where I live, the Navy wouldn’t have given a rat’s ass about it,” Wright said. “But because it’s military families, and those military families have wives, there’s nothing worse than an angry military spouse. Having been in the military 29 years I know, when things go wrong on a military base and the wives get mad, all hell breaks loose.”

Facing growing outrage from the military families, the Navy held a town hall on Dec. 6 where affected families voiced their sense of betrayal at the Navy’s negligence. “Why have you told us that the water was safe to drink, to bathe in while you waited for results that you already had?” one military spouse asked top local Navy officials. “I’m here to ask why you weren’t a wingman to protect my 13-month-old son … while I was giving him a sippy cup full of water from my faucet when he has been throwing up for days on end.”

Muneoka claimed that in the past, Native Hawaiian activists faced backlash whenever they criticized the military, but lately she has felt that the larger community’s feelings about the military are starting to change. Even elected officials who long failed to hold the Navy accountable are starting to more publicly condemn and question the Navy’s actions.

“I think there’s a reckoning happening,” Muneoka said. “For the military families, their whole lives are premised on the belief in this system. For them I think there’s a lot of feeling of shock and betrayal. For Hawaiians, we are not surprised, sadly.”

Adding to the momentum of the Shut Down Red Hill movement is the experience of Native Hawaiian leaders who spent the last several years leading a struggle in defense of the Mauna Kea mountain. The dormant volcano sacred to Native Hawaiians had been chosen as a construction site for a $1.4 billion observatory. Indigenous leaders launched a movement to resist construction, by blocking roads and occupying the land. At the height of the protests several thousand people were occupying the land to stop construction. These protests managed to halt construction in January 2020 and since then much of the opposition has moved to a legal arena.

Many of the Mauna Kea land defenders are now leading the public demonstrations around shutting down Red Hill. Along with the State Capitol, a coalition of Hawaiian organizations called Ka’ohewai has made the headquarters of the U.S. Navy Pacific Command a center of demonstration. In the early morning on Dec. 12, about 70 Native Hawaiians held a ceremony at the gate of the command and constructed a stone altar dedicated to the Hawaiian god of water. The purpose of the altar is to draw people, both literally and spiritually, to the issue of contamination.

Both Muneoka and Wright explained that, while much of the ongoing activism is challenging the Navy’s desire to leave the fuel tanks in place, the military will likely only shut down Red Hill if they are ordered to do so from President Biden.

“When the Secretary of the Navy says to the governor’s order that the tanks should be shut down and drained, ‘I consider it a request,’ that gives you the idea of what’s happening,” Wright said.

“So many people have been to Hawaii for their own recreation or vacation,” Muneoka said. “This is an opportunity for you to do something. We really need pressure on President Biden, which I feel sounds so lofty and far away. But in the U.S., Navy command is everything and people can easily hide behind following orders. We need this order from the top to shut down the Red Hill fuel tanks.”

On Dec. 27 Deputy Attorney General David Day of the Department of Health sided with the governor’s demand that the Navy defuel the tanks. The O’ahu Water Protectors wrote a statement in support of Day’s decision, but added that it is just a first step in what they intend to make a larger movement to demilitarize Hawaii.