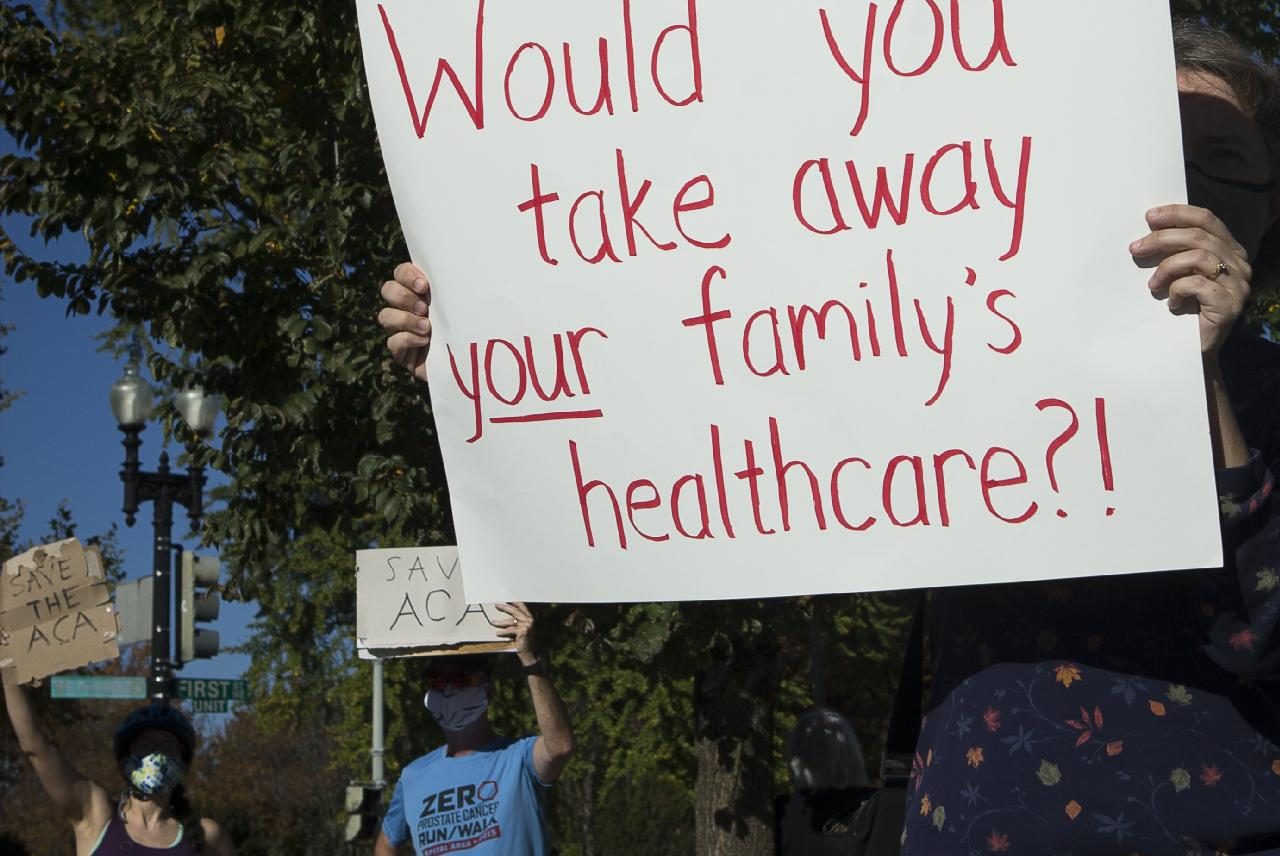 Health Care For Millions On The Line

Above photo: People show support for the Affordable Care Act in a demonstration outside the U.S. Supreme Court in Washington Nov. 10. CNS photo/Tyler Orsburn.

Oral arguments began in the case California v. Texas this week, just days after the confirmation of Trump-appointed justice Amy Coney Barrett. For the third time in the past 10 years, Republicans have launched yet another legal attack at the Supreme Court in an attempt to eliminate healthcare coverage for millions. Republicans hope to use the new 6-3 conservative majority on the Supreme Court to deal the Affordable Care Act (ACA) a final blow.

In 2010, former President Obama introduced what would become his signature legislation under the name of the Affordable Care Act, known commonly as Obamacare. In its original form, the legislation included a key mandate which required all Americans to secure some form of healthcare coverage, either privately or through the ACA, or face an individual mandate tax. Later in 2017, however, this individual mandate was modified by Congress which reduced the charge to $0 while still preserving the core content of the legislation. In effect, the ACA still existed as an option for people in the United States seeking healthcare coverage, however, those without coverage faced no monetary penalty.

In recent years, various Republican officials across the country have joined together in pursuit of a legal challenge centered on the individual mandate modification in the hope of dismantling the ACA. The shaky legal argument contends that the $0 individual mandate is unconstitutional, and as a consequence, the entire Affordable Care Act must be ruled invalid. While the initial line of questioning pursued by key Supreme Court judges has made healthcare advocates optimistic, the possibility of a devastating political attack on nearly 21 million people’s basic right to healthcare still remains a possibility.

Medical illness is the number one cause of personal bankruptcy in America, with over 500,000 claims filed each year on average. With the United States now at the epicenter of the COVID-19 pandemic and amidst massive unemployment, the timing of this attack on the health of the working class is especially dangerous.

Margaret Flowers, a doctor and lifelong universal healthcare advocate, detailed what this case means for poor and working people, saying “what this really points to is the reality that even [the ACA] that was crafted to help to protect the health insurance and pharmaceutical industry under the guise of wider coverage has been attacked since its inception. The reality is that there is no way to take this framework and turn it into a system that is universal or affordable.”

With nearly 4 million people losing their coverage this year alone due to widespread unemployment, Flowers details how “this is now the time for a universal public healthcare service that is free at the point of service like most countries have, and that we can afford to do. We’re spending enough on healthcare in this country to provide high quality comprehensive healthcare to every person right now, but we have to take the profit out of it completely.”

The basic right to healthcare should not depend on the whims of the Supreme Court and the pharmaceutical industry, nor should it come at such devastatingly high costs. Years of activism, opinion polling and voting has made it clear: The people demand free universal healthcare for all!