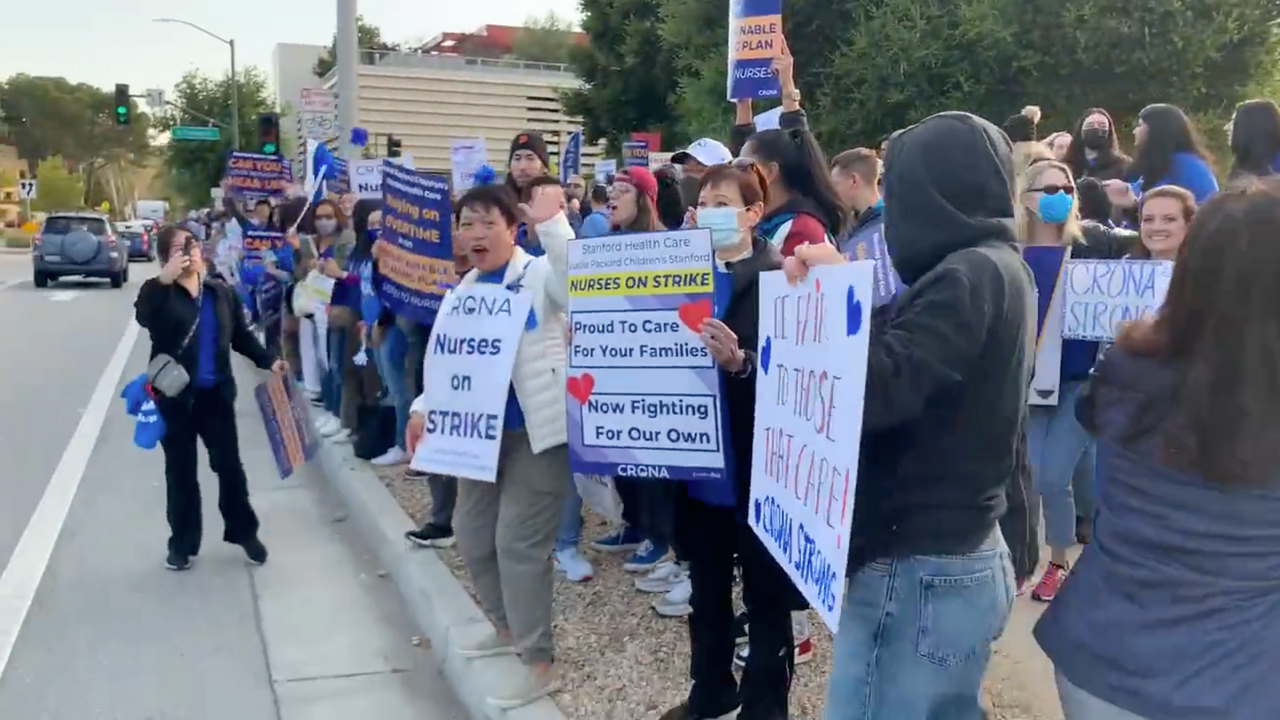 Healthcare Workers’ Struggles Continue Across The US

Above Photo: Stanford nurses at a mass picket.

Nurses and other health care workers across the nation are rising up in a growing wave of strikes and protests against understaffing, lack of crucial supplies, exhausting workloads and the erosion of their living standards by the sharp rise in inflation.

Conditions for health care workers around the world have been greatly worsened by the response of the ruling class to the pandemic. Many are leaving the profession, further deepening the crisis. According to a March 24 report in Healthcare IT News, 90 percent of US nurses are considering leaving the profession.

Not only must nurses handle inhuman levels of stress at work, but they are also facing criminal prosecution as they struggle to perform their duties safely under impossible conditions. The case of RaDonda Vaught, who was arrested after a fatal medication error, was met with a mass mobilization of nurses which was able keep her from having to serve prison time. But nurses continue to be victimized, as can be seen in the case of Michelle Heughins and over 100 nursing home workers in Ohio .

The growing struggles of health care workers is producing a direct collision with the pro-corporate unions, which have done nothing to oppose these conditions and are instead working to suppress and block opposition. Nurses unions are seeking instead to promote inadequate legislation, such as national nurse-to-patient ratios, Bernie Sanders’ dead-in-the-water “Medicare for All” bill and workplace violence legislation will do nothing to address critical issues for health care workers across the nation.

Below are a selection of the major developments across the United States.

The Oregon Nurses Association (ONA) announced Thursday afternoon a new tentative agreement for 1,600 nurses at Providence St. Vincent Medical Center. While the union loudly claimed this a “NURSE VICTORY,” the reality is this is a victory for the ONA, which now has an opportunity to avoid a strike, set for July 11.

As of this writing, the actual contract has yet to be sent to the rank-and-file membership. On social media, ONA Vice-President Jessica Lobell confirmed that the contract signing bonus was removed in the final version of the tentative agreement.

Lobell also signaled that there would not be other major gains for nurses, while simultaneously trying to undercut the need for a strike, stating, “I cannot emphasize enough that we will not get everything we want in this round no matter if we strike or not.”

At Seton Medical Center in Daly City, 300 nurses went on a two-day strike on June 22- 23. Seton nurses have been in contract negotiations since December 2021, and nurses told WSWS reporters that they are working without basic supplies, such as fresh linens, bath wipes and diapers. Nurses also stated they are frequently forced to work around broken equipment, such as elevators and CT machines.

Staffing is inadequate, with nurses reporting that they are out of the legally mandated state ratios on a daily basis and are asked in addition to perform duties of other workers such as transporters and janitors to cover shortages. These intolerable conditions have led to roughly 80 nurses leaving the hospital within the last two years.

June 18 also marked two months since a one-day strike by roughly 8,000 nurses at 15 Sutter Health facilities across the region. Nurses were then locked out for an additional five days after the strike by hospital administrators and have now been on the job without a contract for an entire year. The California Nurses Association (CNA) was compelled to call the strike after a nearly unanimous strike authorization vote in March. The hospital’s contract proposal included a pitiful 2 percent annual wage increase and did not address nurses’ concerns over inadequate staffing and personal protective equipment (PPE) supplies.

More than 300 nurses, respiratory therapists, radiology technicians and other workers have returned to their jobs at Saint Michael’s Medical Center in Newark, New Jersey, after a strike of nearly four and a half weeks. The Jersey Nurses Economic Security Organization (JNESO) used thoroughly undemocratic means to end the strike and impose an austerity contract on the workers.

According to the deal, workers will receive annual raises of only 3 percent, less than half the current rate of inflation. Another cruel aspect of the contract is that these workers have been saddled with a health insurance plan with high co-pays and a $5,700 deductible.

From the beginning, JNESO focused its efforts on isolating the strike as it conducted closed-door negotiations with management under the auspices of a federal mediator. The union never paid a cent in strike pay, never called on workers at other hospitals owned by Prime Healthcare or even workers at other Newark hospitals to support the Saint Michael’s workers.

One month has passed since contracts expired for 12,500 nurses in the Minneapolis-St. Paul metro region. The Minnesota Nurses Association (MNA) has only called for informational picketing and is remaining quiet about the status of contract talks.

In addition, contracts for some 2,500 nurses at Essentia and St. Luke’s hospitals expired on June 30. Nurses at two other smaller regional hospitals in Moose Lake and Hastings also have contracts that have recently expired, bringing the total amount of nurses working without a contract in the Twin Cities region to 15,000. The MNA has yet to even call for a strike vote, instead calling only for limited “informational pickets” to let workers blow off steam.

The MNA is also working to keep opposition safely directed behind the Democratic Party. The “Keeping Nurses at the Bedside Act,” which is stalled in the state legislature, does not even address staffing ratios but only establishes state-controlled “staffing committees,” which will do nothing to address the conditions nurses face.

At Palomar Health in San Diego, 3,000 nurses and health care workers—who had voted by 96 percent to strike—had their strike called off at the last minute by the CNA and Caregivers and Healthcare Employees Union (CHEU). They announced a sellout tentative agreement and rushed a vote, leaving workers with little to no time to fully review the contract.

The union is boasting about “strong” health and safety “language,” the establishment of “committees” where “RNs and caregivers meet with management to address patient care concerns.” The establishment of these committees will do nothing to actually deal with insufficient staff-to-patient ratios, allowing burnout rates to increase and endangering patients. The contract also contained a paltry 10.25 percent minimum wage “raise” over the life of the contract, which comes out to approximately 3.41 percent per year, far below skyrocketing inflation rates.

After a planned strike was called off at the last minute at Long Beach Medical Center/Miller’s Children’s & Women’s Hospital last Wednesday, the CNA managed to push through a concessions contract. As is common practice for the union, workers could not review the full text of the contract until the day of the vote.

While the union has praised the contract for securing staffing increases, there is little beyond the promise of a “professional practice committee,” an advisory body of nurses connected to the union which will hold meetings on the issue of staffing shortages.

On June 23, 1,000 Los Angeles Kaiser nurses also went on a one-day strike. Kaiser LA nurses have been working without a contract since September of last year and report that staffing is so dire they are unable to care for patients safely and rarely take regular lunch breaks

In Ann Arbor, Michigan, the contract for 6,200 nurses at Michigan Medicine expired on June 30. The management of the hospital affiliated with University of Michigan is determined to impose a concessionary contract with pay increases that do not keep pace with inflation, relentless mandatory overtime and an oppressive on-call system.

After months of negotiations, the Michigan Nurses Association (MNA) and University of Michigan Professional Nurse Council (UMPNC) have done nothing to mobilize the strength of nurses, instead isolating nurses from other workers in the same hospital system as well as nurses at other hospitals across the state who suffer under the same conditions.

The nurses unions have attempted to direct opposition among nurses into dead-end appeals to the millionaires and billionaires on the university’s board of regents. Refusing to mobilize the strength of the nurses, the UMPNC has not called for a strike authorization vote, telling their membership that hospital management will not back down from its demands for concessions. Instead, they have arranged for an informational picket on July 16, over two weeks after the expiration of their contract.