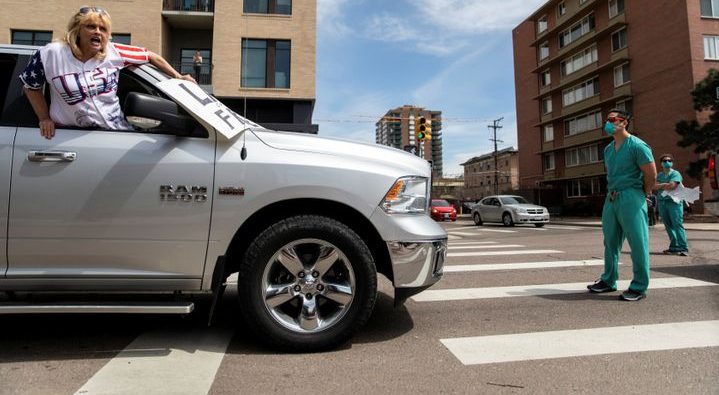 Above photo: By Alyson McClaran, Reuters.

NOTE: The “Reopen Protests” occurring in states throughout the nation, which are being encouraged by President Trump, appear to be a well-funded and coordinated campaign to defy governors’ orders and loosen restrictions on efforts to contain the COVID-19 pandemic. The branding and imaging are well-coordinated on the websites for various states and can be traced back to Republican and right-wing groups.

As tensions continue to boil over amid the ongoing coronavirus pandemic that has placed large swaths of the nation at a standstill, a small group of health care workers blocked hundreds of protestors in Denver on Sunday afternoon, resulting in a dramatic showdown.

Alyson McClaran, a photojournalist based in Denver, said the medical workers stood in the street to counter hundreds who had gathered at the Colorado capitol in an event dubbed “Operation Gridlock.” The event was meant to express frustration with Gov. Jared Polis’ (D) stay-at-home orders as coronavirus continues to infect tens of thousands of people around the country.

HuffPost has not been able to identify the health care workers seen in the photographs, but video taken at the scene showed one man dressed in scrubs standing calmly in front of a line of cars as a woman holding a banner reading “Land of the Free” screamed at him.

“You go to work, why can’t I go to work?!” the woman yelled in the footage. “I’ve saved people’s lives too!”

Two nurses, who have witnessed first hand the toll Covid is taking in Colorado, stood up and peacefully counter protested. Here is how they were treated. I had join them. pic.twitter.com/iJnNcqZxSv

Colorado is currently under a stay-at-home order until April 26 and Denver has an extended version in place until the end of the month. To date, Colorado has experienced more than 9,700 cases of COVID-19 and at least 420 deaths. The U.S. as a whole has seen more than 761,000 cases and more than 35,000 deaths.

In addition to deaths and sicknesses, the outbreak has wreaked havoc on the economy. Some 22 million people filed for unemployment benefits in the past four weeks, the worst period of joblessness in American history. Despite a landmark $2 trillion stimulus package meant to avert some pain of a financial crisis, some Americans who are running out of money have grown frustrated with a slate of social distancing measures designed to save lives and stop the spread of the novel coronavirus, and launched protests in Michigan and Washington.

“It’s gone from frustration into anger,” Cañon City, Colorado, Mayor Ashley Smith wrote to Polis this month, per Colorado Public Radio. “It will definitely be the breaking point for folks and I’m really worried … that there could be some protesting and mutiny in my city. And I don’t want it to be that way.”

Wow. These are pictures for the history books.

Protesters gathered in Denver for about four hours on Sunday, carrying banners and honking horns throughout the capitol, The Denver Post reported.

President Donald Trump has continued to call for the country to reopen. He said the U.S. has adequate testing capabilities and last week unveiled a three-phase plan that governors could enact to help Americans start “our life again.” However, several governors said the U.S. does not have the testing capacity needed for states to relax social distancing measures. And many health officials have warned against jumpstarting society too soon, saying doing so could be catastrophic and result in a renewed outbreak.

“We have to have something in place that is efficient and that we can rely on, and we’re not there yet,” Dr. Anthony Fauci, the nation’s top infectious disease expert, told The Associated Press last week.