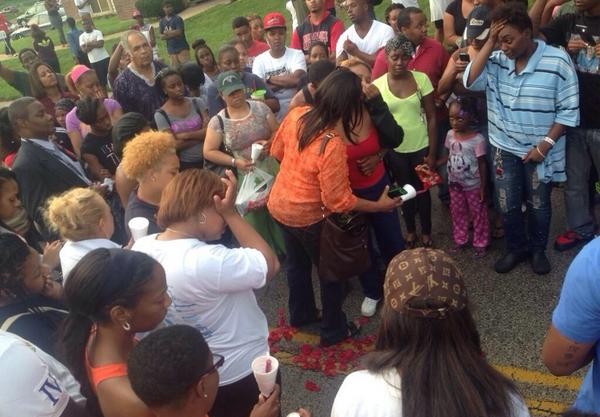 Healthy Response To Racism And Trauma In Ferguson

Above photo: Mike Brown’s mother spreads flowers at the site of his murder during a community vigil.

In the past month, four unarmed black men, one as young as 18, who were murdered by police have made the headlines. On July 17, Eric Garner was killed by an illegal chokehold in New York. On August 5, John Crawford was shot in a store in Beavercreek, OH. A teenager, Mike Brown of Ferguson, MO, was shot multiple times for walking down the street close to his home on August 9 and most recently, Ezell Ford, a young man with known mental illness, was shot in Los Angeles. The whole nation is experiencing these tragedies as we read the stories of the murders and watch videos of the events and of the mourning of family, friends and communities. Tonight there will be a national moment of silence from coast to coast.

It is right that we mourn these deaths and those of the hundreds of young black men and women who are disproportionately targeted by police each year. According toa study which may underestimate the actual number, a black man is killed every 28 hours by either police, security guards or vigilantes. On top of that, Stop and Frisk policies target people of color and people of color are more likely to be incarcerated.

It is common in the cases of shootings by police for the officers to falsely claim that the victim was armed or aggressive and for the media to falsely portray the victim as a criminal. This is an attempt to justify the use of deadly force and extrajudicial murder. However, we have a justice system to decide if and when execution is the punishment. Although that system is itself flawed, it is preferable to officers trying, sentencing and executing a person in an extra-judicial approach to ‘justice.’

The murder of teenager Mike Brown, who would be starting technical college this week if he were alive, has stirred a deep response by the community. Although police initially stated that Brown was the aggressor, at least two eyewitnesses have come forward with identical accounts that Brown was the victim of assault by police and was gunned down while holding his hands in the air and saying, “I don’t have a gun, stop shooting.”

Brown’s death seems to have been the last straw for the community given that people of color in Ferguson have been mistreated by the almost all white police force for a long time. Last year, the Missouri State Attorney General’s report on policing in Ferguson showed that although blacks make up 63% of the population, they make up 86% of police stops. Blacks are almost two times as likely to be searched and are arrested twice as often as whites although whites are more likely to possess contraband.

A healthy response by the local police and government agencies in Ferguson and St. Louis County would have been to immediately announce a full investigation of the shooting and a review of police policies and practices. Counselors should have been made available to community members to assist them in coping with the tragedy and the community’s right to peacefully protest the murder should have been respected and enabled. These initial steps would have aided healing and provided an opportunity to correct policing that inflicts harm rather than serving the public.

Instead, the response by police in Ferguson has been to inflict greater trauma and instigate anger. Police have responded to peaceful protests with a massive presence and officers in full military equipment with tanks taking over the streets. Residents, including members of the local government, have been confronted with assault rifles pointed at them, rubber bullets and tear gas. Last night, the police aggressively cleared the streets and shops and kettled residents, preventing them from getting to their cars. They arrested reporters and ordered the media to stop filming and photographing. The local alderman and his staff were pulled from their cars where they sought refuge and were arrested. Police also deployed sonic cannons known as Long Range Acoustical Devices to clear the streets.

This excessive response by police at a time when violent crime is falling is a symptom of the increasing militarization of police in the United States. Not only are police forces receiving military equipment for free from the Department of Defense, they are also being trained by military personnel in the United States and by the Israeli Defense Force abroad. Officers are trained to see residents of our communities as ‘the enemy’ and sheriffs have been quoted calling our streets a ‘War Zone.’ For police officers who are vets, Post-Traumatic Stress Disorder (PTSD) may play a factor in their behavior, especially when it is triggered by an atmosphere at home similar to what they experienced overseas. There is also concern about anabolic steroid abuse among police and the possibility of ‘steroid rage.’

The American Civil Liberties Union has been documenting this trend of militarization of local police and suggesting solutions. It is up to the people to demand greater transparency and accountability of our local policing policies and behaviors. We add to that a demilitarization of police and greater instruction in community relations. Counseling of officers who experience PTSD and testing and treatment for anabolic steroid abuse would also be helpful. It is time to de-escalate police behavior and create a police force that uses proven solutions to create a peaceful and safe environment for everyone.

~ Kevin Zeese serves as Attorney General and Margaret Flowers serves as Secretary of Health on the Green Shadow Cabinet. There will be an in-depth look at this issue in their radio show this Monday.