As outdoor workers labor in extreme temperatures, they are vulnerable to heat-related illnesses that can be fatal. Climate change raises the risks.

Parts of the country are expecting another round of searing, potentially record-shattering heat in the coming days, and many farm and construction workers will be out in it—with no federal heat stress standards directing their employers to offer them water, rest or shade.

Despite recommendations going back more than 40 years, the federal government has repeatedly failed to set a heat stress standard for American workers.

On Tuesday, the consumer advocacy group Public Citizen, along with United Farm Workers Foundation and Farmworker Justice, joined more than 130 public health and environmental groups in submitting a petition to the Occupational Safety and Health Administration calling for the agency to require employers to protect their workers from heat by imposing mandatory rest breaks, hydration and access to shade or cooled spaces, among other measures.

“This is a public health issue. This is a justice issue. The people who feed us, who feed America, deserve strong protections from the effects of climate change,” said Jeannie Economos, a project coordinator with the Farmworker Association of Florida. “We’re calling on OSHA not to delay anymore.”

As global warming continues, extreme heat is expected to become more common, and the plight of outdoor workers will get more extreme along with the weather, making stronger standards more critical.

From 1992 to 2016, heat killed 783 workers in the U.S. and seriously injured nearly 70,000, according to the group’s new analysis of working conditions in high temperatures.

Those numbers, the report said, understate the total. In 2011, Public Citizen petitioned the agency for a heat stress standard, and in response, OSHA acknowledged that heat-induced “deaths are most likely underreported, and therefore the true mortality rate is likely higher.”

Farmworker advocacy groups have noted that migrant workers are especially reluctant to insist on breaks or water, and that illnesses and deaths from heat are likely underestimated because undocumented workers fear retaliation or deportation.

“No worker should feel the threat of job loss, retaliation or deportation,” said Ellen Widess, former head of California’s Division of Occupational Safety and Health and a Farmworker Justice board member.

“Given climate change, rising heat, high-heat incidents and expanding areas of California and the nation which experience high heat, we have to do something,” she said. “These risks are preventable.”

In 2005, in response to a series of worker deaths, California became the first state to impose a heat standard, requiring rest, water and shade for outdoor workers. The state is scheduled to extend protections to indoor workers in January 2019, Widess said. She said there have been “countless” heat-related illnesses among workers in food production facilities and warehouses, mostly from poor ventilation.

“Many heat illnesses and even deaths go unreported,” Widess added. “But we do know that the standard has protected countless workers in California.”

Minnesota and Washington have since created heat-related standards for workers. Minnesota’s heat standard covers only indoor workers and requires rest breaks and worker training, among other measures; Washington’s covers outdoor workers only and requires hydrating and worker training, among other measures. The U.S. Navy first set heat exposure limits in the early 1970s, and the Marines, Army and Air Force implemented heat-protection measures in the early 2000s, the report said.

David Michaels, who headed OSHA during the Obama administration, said the military’s standards were applied during the cleanup of the BP Deepwater Horizon oil rig explosion in 2010. Some 40,000 workers toiled in extreme heat, cleaning up oil along the Gulf of Mexico, and “not a single cleanup worker was killed by the heat,” he said.

The National Institute for Occupational Safety and Health (NIOSH) first recommended a heat stress standard in 1972, then again in 1986 and 2016, but OSHA has yet to create the standard.

On a call with reporters Tuesday, Michaels was asked why OSHA failed to establish a heat stress standard during his tenure. He said the agency was consumed with creating workplace exposure standards for beryllium and silica dust at the time. “Now that the silica and beryllium regulations have been completed, it’s time for OSHA to apply the lessons learned” from the military and California standards, Michaels said. “There’s no question it will save lives.”

Rep. Judy Chu, a Democrat from California, told reporters on the call that she intends to introduce legislation that would call on the government to set heat stress standards.

“We know enough now that global warming has made many industries hazardous because of heat,” said Eula Bingham, who directed OSHA from 1977 to 1980.  “If you have people in the Senate and the House of Representatives who will press for a standard that is nationwide, it’s very easy to do. You just have to do it.”

Another Fierce Heat Wave in the Forecast

Those standards will come too late to protect outdoor workers in coming days.

“We’re looking at temperatures that will rival the all-time max and minimum in parts of northern Texas and across the southern plains,” said Michael Ventrice, a meteorological scientist with The Weather Company. 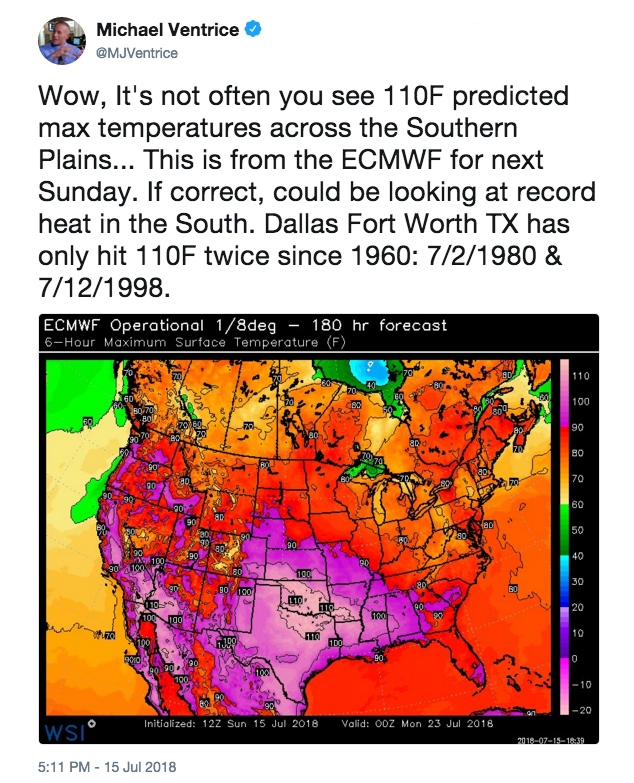 “As the climate warms up, there’s more extreme heat,” said David Arkush, managing director of Public Citizen’s Climate Program.  “When you can’t cool down off the job, that increases your risk on the job.”

Bobbi Ryder, CEO of the Texas-based National Center for Farmworker Health, which was not involved in Tuesday’s petition, said the state has some recommendations for how to keep workers safe in the heat, but no regulations.

“We have all kinds of real-life, honest-to-God horror stories where crew leaders are not taking care to get people in the shade or get water. And people die,” she said. “It’s a killer.”