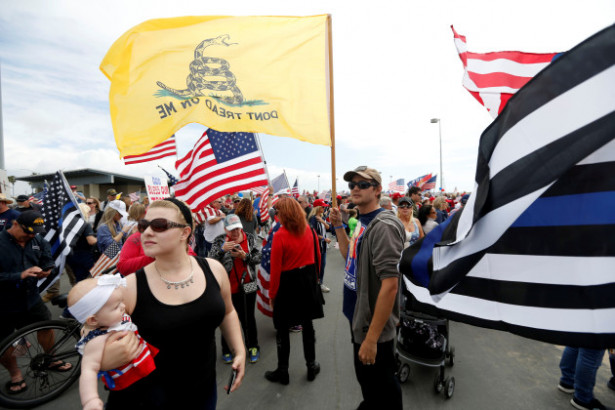 A heavily armed left-wing group, the John Brown Gun Club, made a surprise appearance over the weekend at a pro-Trump rally being held in Phoenix, Arizona with a conciliatory message for supporters of the president.

About two dozen men and women armed with a variety of rifles stood beside the march in downtown Phoenix, in order to both show their opposition to the Trump administration and its policies, and to appeal to supporters of President Trump as fellow members of the working class. The group describes itself as largely white and working class, with the ultimate goal of “total liberation of all working people, regardless of skin color, religious background, sexual orientation, gender identity, [or] nationality.”

“Phoenix John Brown Gun Club went out to the MAGA march at the Arizona State Capitol today, open carrying alongside the Arizona Brown Berets and in coalition with AFA.

Our statement to the attendees of the march:

“WE STAND FOR THE LIBERTY OF ALL PEOPLE.

We are working class and poor people. We are not here today as your enemies. But Jews, Muslims, migrants, refugees, folks of color, native people, queer and trans folks, the elderly, or others who are now being targeted by the Trump administration are also not your enemies.
We have been fooled and duped for long enough by politicians on all sides. We keep on following the same politicians as they break promise after promise and sell out hard working and struggling folks. Whether Democrat or Republican, they’re always the same: rich politicians who only look out for themselves at the expense of all the rest of us. No matter what lies they tell us about being champions for the “everyday citizen” or “little guy”, they all end up behaving the same.
We are now watching as preparations are made to slash the budget for meals on wheels, denying tens of thousands of senior citizens the nourishment they need to survive. We look on as the new administration targets and attacks people merely for the religion they practice. We cringe in horror as the swamp is not drained, but padded by even more corrupt Wall Street swindlers. We stand in shock as the Federal government seizes land from small farmers and home owners to build a massive border wall. Every day another executive order is signed and our “little guy” president rules with the stroke of a pen, mocking whatever we thought our democratic processes stood for.

Meanwhile, we are so busy attacking each other that we don’t even have the ability to resist the folks actually calling the shots. We who have been attacking the Mexican day laborer rather than the rich CEO. We who have rallied against the construction of new Mosques instead of ensuring all our city’s children have clean drinking water. We who have made public calls to attack and arrest Black Lives Matter activists rather than to investigate and punish billionaires who gut our pensions and health insurance. Striking out at folks who we have much more in common with, folks who should be our natural allies, instead of at those who rig this entire system and profit from our misery.

The only people who gain from this are the politicians and the economic elite they protect. While we’re busy fighting black folks, migrants, queer folks, and Muslims, our communities crumble. While we work ourselves into a frenzy about Syrian war orphans potentially moving into our cities, our own children struggle to eat. While we attack other marginalized and exploited people, the rich and politicians watch on and laugh at us.

All people who want real liberty and a better future face a choice. We can choose to continue to attack folks merely because they have a different skin color or religion or sexual preference or gender identity or country of birth than we do. Or we can choose to fight for liberty for all people. We must choose a side, and we must do it now.

We must defend these targeted communities at all costs. We will not merely watch as our co-workers, neighbors, friends, and families are stolen from us, murdered, deported, arrested without cause, disappeared, and brutalized. We have far more in common with a migrant or refugee or black  co-worker than we ever will with a billionaire politician, and we will fight like hell to protect them. 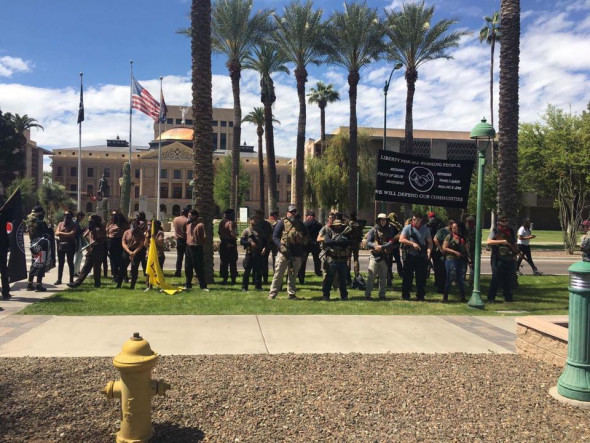 Their message of solidarity fell mostly on deaf ears, as members of online pro-Trump communities like “The Deplorables” mocked the group as “snowflakes with guns.” Others saw the armed left-wing activists as threatening confrontation, daring them to “bring it on.” 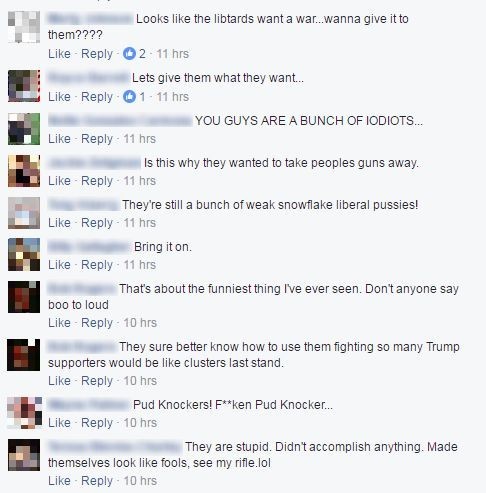 The Phoenix pro-Trump rally passed without incident, as about 250 participants marched to the state capital to show their support for the president.