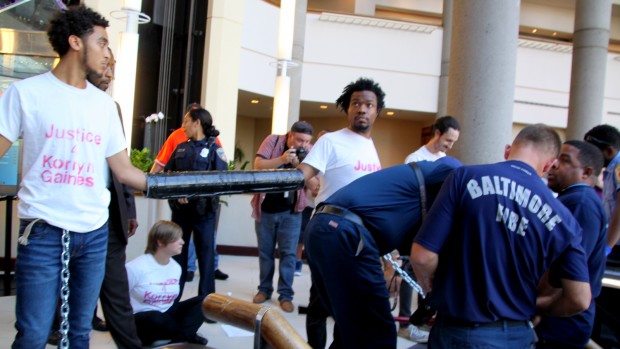 Above Photo: Baltimore firefighters cutting metal chains protesters had used to chain themselves to railings during a Maryland Fraternal Order of Police convention in Baltimore. (Fern Shen)

Unwarranted arrests of people doing nothing illegal – often after a hot-headed officer escalated a situation – were among the unconstitutional actions documented by the U.S. Justice Department in a scathing report on the Baltimore Police Department released Wednesday.

City police made one such arrest, arguably, at a protest yesterday afternoon intended by organizers to call attention to the overly aggressive behavior chronicled in the Justice report.

It happened during a protest staged at the Hyatt Regency Baltimore where the Maryland Fraternal Order of Police was holding a four-day conference.

The arrest took place at the top of the escalators in the hotel lobby where four demonstrators had chained themselves to metal railings, their arms also connected to each others in a manner obscured by foam tubes, making it impossible for police to know how to safely cut them apart so that they could handcuff and arrest them.

Ultimately, police later said, they arrested 12 people at the demonstration, in which members of Baltimore Bloc and Black Youth Project 100 chained themselves together and to objects.

But one of those arrested, Baltimore Bloc activist Payam Sohrabi, had been merely filming the action. (Police had allowed filming by several members of the media as well as numerous random bystanders and other activists.)

It was a strange scene.

Firefighters with clippers and power tools were cutting the chains on activists who were reading aloud from a list of demands, the same demands about 60 chanting protesters in front of the hotel were making.

They called for the FOP’s 79 lodges in Maryland to be shut down and turned into community centers or homeless shelters or, failing that, for there to be more scrutiny of police union contracts with local jurisdictions. They called for citizens to be included on police trial boards.

They called for the naming and arrest of the officers whose actions – excessive use of force, strip-searching a woman stopped for a broken tail light, etc. – were detailed in the Justice report. They called for the Baltimore County officer who fatally shot Korryn Gaines earlier this month to be identified as well.

(Officers had gone to Gaines’ Randallstown apartment to serve a warrant on the 23-year-old for alleged traffic violations and other minor charges. Police said Gaines had refused to leave and had raised a shotgun at them. After an hours-long-standoff, a tactical officer shot Gaines fatally. Her five-year-old son, who had been in the apartment, was also shot by the officer and sustained non-fatal injuries.)

Watching this civil action play out was a group of spectators that included people with lavender hair, cardboard swords and bare midriffs – participants in the annual Baltimore anime fan gathering known as Otakon being held over the weekend in the Baltimore Convention Center.

Also watching were clusters of people, many with beer bottles in hand and wearing FOP polo shirts, who had come for the statewide police union meeting being held at the Hyatt.

One of the men who had been standing with the FOP group shoved up against Sohrabi sharply from behind, pushing him into an area police had told the media not to go.

This provoked a heated exchange between the two that was being closely watched by a white-shirted police officer.

“Let me ask you this, sir, do you have business here in this hotel,” the officer asked Sohrabi.

“Do not touch me!” Sohrabi said.

“Do you have business here in this hotel?” the officer said again.

“Do not touch me,” Sohrabi again replied.

“Why are you asking me [that] when you have all these other people recording?” Sohrabi said, whipping out his cellphone and pointing it at the officer.

At that, the policeman swatted Sohrabi’s phone out of his hand, spun him around and called other officers to put the plastic handcuffs on him.

As two wide-eyed Otakon attendees watched, he was whisked into one of the Hyatt’s glass elevators and transported upward.

The FOP group laughed and applauded.

Baltimore Police Department spokesman T.J. Smith later told reporters that the six men and six women who were arrested included one person from Chicago, four people from Baltimore and seven people from others parts of Maryland.

Police have not yet released their names and charges. Sohrabi said today he was charged with trespassing and failure to obey a lawful order. He also said he had purchased food and drink at the hotel bar.

“After the private security on their private property told them to leave and they remained, we were forced to make arrests,” Smith said, calling the incident “an act of civil disobedience.”

According to the @BmoreBloc Twitter feed, all of the arrestees were released from Central Booking, after being charged with trespassing and failure to obey.

Circulating online this morning were several videos showing what appeared to be other FOP meeting attendees grabbing and physically restraining the protesters.

Baltimore Police released the names of the people arrested this afternoon: