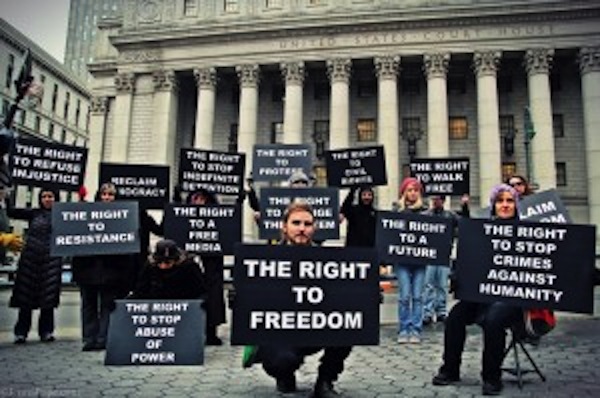 On Monday, the Supreme Court declined to consider Hedges v. Obama, a constitutional claim challenging a law that could enable the indefinite military detention of US citizens—within the US—without trial, charge, or evidence of crime. The decision is remarkable, both for its implications for fundamental rights, and its reflection on judicial independence.

A dangerous and controversial law

When the National Defense Authorization Act of 2012 was first signed into law on the last day of 2011, few observers noticed. Some version of the bill is passed every year, but the 2012 version inserted dangerous provisions that could expand the military’s domestic detention powers.

Several notable observers did take notice, however. Despite her complicity in mass NSA surveillance, Senate Intelligence Committee Chair Dianne Feinstein (D-CA) has spoken out against torture, as well as detention. When Congress debated the 2013 NDAA in 2012, she unsuccessfully tried to limit the detention provisions through amendments.

Military families also spoke out, supporting a county resolution in El Paso County, Colorado (the site of several military installations, including the Air Force Academy) that passed even before the bill became law. They recognized that:

[O]ne of our most fundamental rights as American citizens is to be free from unreasonable detention without due process of law, a right afforded to us by our Founding Fathers and guaranteed to us by over two centuries of sacrifice by our men and women in the Armed Forces whom we daily recognize and honor;

US District Judge Katherine Forrest also shared similar concerns. In September 2012, she issued a permanent injunction aimed to prevent the detention provisions from going into effect. She wrote that:

The due process rights guaranteed by the Fifth Amendment require that an individual understand what conduct might subject him or her to criminal or civil penalties. Here, the stakes get no higher: indefinite military detention–potential detention during a war on terrorism that is not expected to end in the foreseeable future, if ever. The Constitution requires specificity–and that specificity is absent.…

Although § 1021(b)(2) does not, strictly speaking, suspend the writ of habeas corpus, it eliminates all other constitutionally-required due process (indeed, leaving only the writ)

The Second Circuit’s decision to reverse her decision, and Monday’s Supreme Court decision to allow that reversal to stand, have dangerous and disturbing implications. The Snowden revelations may help explain why.

A whole worse than the sum of its parts

The power to detain—or, for that matter, kill—without charge or trial effectively inverts the presumption of innocence. Due Process requires the state to prove allegations before meting out punishments. Yet the indefinite detention powers of the NDAA could empower our military to imprison Americans on the basis of mere accusation, effectively treating people accused as if guilty until proven innocent.

Our nation has already legalized torture with impunity. Beyond undermining human rights, fueling terrorist recruitment and generating bad intelligence, torture also enables future officials to paint anyone potentially detained as guilty—even without proof, on the basis of “confessions” coerced by interrogators.

In other words, the NDAA could enable government detention, possibly of targets identified through the surveillance regime exposed by Snowden. While President Obama has renounced so-called “enhanced interrogation,” those detainees remain potentially vulnerable to torture techniques that could effectively contrive their guilt.

The only things as disturbing as the power to torture people into false confessions are the powers (1) to detain them without cause, (2) monitor them en masse in secret (potentially to identify potential dissidents), and (3) arbitrarily profile individuals and communities according to their race, religion, or point of view.

All of these powers are currently well-established in American law. Together, they could form the foundations for severe oppression, or even mass atrocity. Once triggered, it will take very little to bend those dangerous powers to horrific ends—and a great deal to stop them.

This is one reason why detention without trial—like mass surveillance—has always been viewed as a defining cornerstone of authoritarianism. The relevant question is not whether these powers can be abused: it’s whether anyone self-censors because they know they’re being watched, which has already been well documented.

The judiciary vs. itself

Also disappointing is the judiciary’s self-marginalizing erosion of its own independence. Our courts have abandoned not only the Constitution, but also themselves.

By dismissing Hedges, the Court effectively rejected a challenge to the government’s military detention power, specifically because the plaintiffs couldn’t prove that they would be subjected to it. Almost exactly one year before, the Supreme Court dismissed Clapper vs. Amnesty International, allowing the NSA to evade a years-long legal challenge, specifically because the plaintiffs in that case could not prove that they were being monitored.

Within weeks of that decision, the Snowden leaks exposed that absence of proof as a farce, by revealing that hundreds of millions of Americans are monitored. Yet again, in dismissing the Hedges case, the justices of the Supreme Court stuck their heads in the sand, choosing to defer to executive secrecy rather than do their jobs to defend constitutional rights.

As BORDC (the organization I lead) argued to the Second Circuit, the executive branch has a pattern of evading judicial review, gaming the system to prevent courts from reaching the merits of important cases testing the limits on executive power. Judge McMahon in New York noted exactly this concern when expressing her disappointment in needing to rule against requiring disclosure of legal memos asserting the power to kill Americans without trial.

For instance, under the Bush administration, the court reviewed a case challenging the military detention of Jose Padilla, a US citizen of Latino descent. The court allowed the government to moot that appeal by simply charging the defendant with a minor crime, years after holding him in solitary confinement—which constitutes torture, according to international bodies and the city of Chicago—on the basis of allegations that were never proven.

In both Clapper and Hedges, the Supreme Court forced plaintiffs to provide evidence despite its simple unavailability. Imposing so demanding a burden of proof in the face of executive secrecy allows government secrecy to trump judicial independence. In other words, the court is not only abdicating its role of enforcing the Constitution, but even its own institutional power to check or balance the executive in the future.

Marbury v Madison, a seminal 19th century case, established the power of our nation’s judiciary. Courts are inherently weak institutions, wielding the powers of neither sword nor purse. Marbury enabled an independent judiciary. The justices of the co-opted Roberts court would do well to revisit its importance.

In the meantime, we the people need to take matters into our own hands to defend our rights. Every day, we each have opportunities to build a movement by raising our voices. The courts’ unwillingness to do so renders it imperative that we force change through the political branches, before these powers become inevitably abused and choke out of our democracy what life remains in it.