Update: Meanwhile the Netherlands has also officially distanced itself from this approach. However, the point of this article is to unravel the underlying paradigm of this strategy, not to make an argument about its effectiveness.

While most European countries are preparing for lock-downs to stop the spread of the coronavirus, a few countries are opting for a different strategy: herd immunity. Instead of testing as many people as possible and implementing measures to increase social distancing, they want to purposefully let the virus spread among people who are at low risk, so that a large part of the population becomes immune. This approach was first proposed by UK’s prime minister Boris Johnson, who refused to implement social distancing measures until a few days ago. While the UK has officially distanced itself from this strategy, the Netherlands and Sweden continue to hold on to this approach, despite harsh criticism by the WHO.

These countries argue that building herd immunity is the only long-term strategy for dealing with the virus, since the epidemic can no longer be contained and could always resurge again. Instead of putting the entire country under lockdown, only at-risk populations should be put into quarantine while the epidemic keeps spreading. However, countless epidemiologists and virologists have criticized the strategy for being risky, unscientific and likely to result in a high death toll. A recently published report by the Imperial College London, which led to the change in UK government policy, estimated the strategy to result in 250,000 deaths in the UK. Since it is not possible to effectively isolate at-risk populations, especially when the virus keeps spreading, the health care system is likely to become overwhelmed and at risk of completely collapsing.

Why would a country like the UK even consider such a risky strategy, and why are other countries still following this approach? The reason is neoliberalism. Since the 1980s, we have been governed by the political paradigm of neoliberalism, which has replaced state-led social policy with privatization and deregulation of the market. Its belief in the inherent justice of the market has led to a political rationale, which literally puts profit before people. And it has colonized peoples’ minds by making them believe it is their fault if they are poor, precarious or unemployed.

The irony of neoliberalism is that it creates the illusion of social mobility, while reinforcing and even deepening social inequality. It assumes that if anyone can “make it” in a free market, it must be peoples’ own fault if they are poor. But this belief is not only wrong, it is also violent. Neoliberalism has resulted in the rich getting richer, and the poor suffering more from disenfranchisement, precariousness and dependency. What might seem like laissez-faire policy, is a refined and complex system of automated structural violence against the weak, which also shatters any possibilities of resistance.

Herd immunity is epidemiological neoliberalism. Much like the unconditional belief in the free market, herd immunity relies on the assumption that an epidemic is best overcome by leaving it unregulated. But just like neoliberalism, it results in violence against the weak and the poor: elderly and disabled people, homeless people, refugees and people with severe health conditions – many of whom are likely to also have a lower socio-economic status because of the correlation between poverty and illness. These are the people, who are at the highest risk of dying from COVID-19 – especially if the healthcare system is overwhelmed and doctors have to perform triage.

It is no coincidence that it was the UK and the Netherlands, two of the most neoliberal countries in Europe, which advocated for this approach. These countries have spent the past decades implementing policies that privilege economic over social interests, and systematically defunded healthcare, education and housing. Opting against economically-harmful lockdown measures fits perfectly into their political rationale. Sweden, however, is a more puzzling case: it is a country which is internationally acclaimed for its good social policy and generous welfare state. But even an archetypical social democracy like Sweden has not been immune to neoliberal policy. Like most European countries, its welfare state has systematically been dismantled in the past decades.

The biggest challenge of the corona-epidemic is “flattening the curve”, so that the capacities for critical and intensive care are not overwhelmed. But these three countries already have such low capacities for critical care, that they wouldn’t suffice even with strict lockdown measures. The UK and the Netherlands only have about half the capacity of Italy of critical care beds per capita. And Sweden, the supposedly best welfare state in Europe, has even less than half. 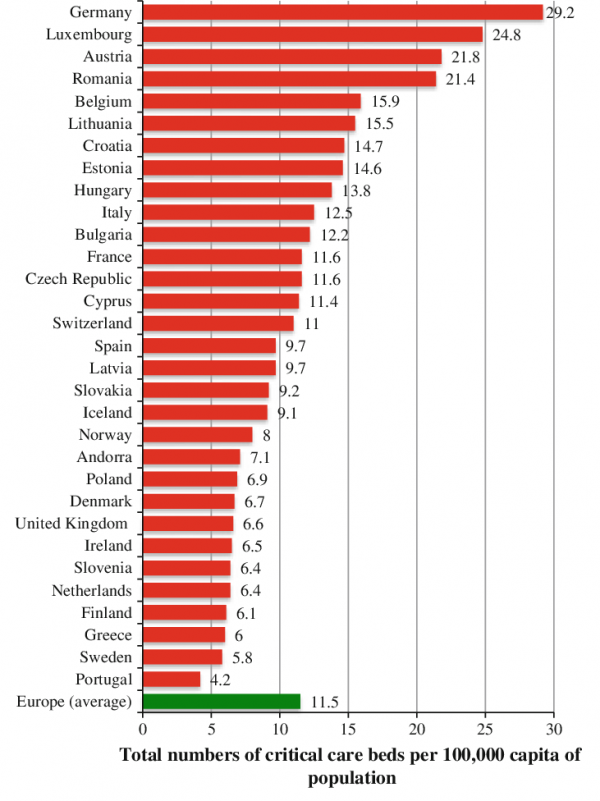 If these countries wanted to prevent their capacities from being overwhelmed, they would have had to act a long time ago. But that ship has already sailed. Enforcing strict lockdown measures would not only put the economy under strain, but would also expose the crumbling health system from decades of neoliberal policy. Opting for herd immunity allows governments to blame the failure of the health system on the virus, rather than on bad governance. Just like individual poor people can be blamed for not trying hard enough, individual sick people can be blamed for not following quarantine measures. It doesn’t matter whether its nature, fate, or one’s own fault – as long as it’s not the government which is held accountable for peoples’ deaths.

Herd immunity is not just bad science or bad policy. It is biological warfare. Many people will die because of it, and governments won’t take responsibility for it. But this strategy did not appear from nowhere. It is a logical continuation of the political rationale that has governed the world for the past decades, taken to an extreme as a laissez-faire social darwinism. Because people who trust in an unregulated market will also trust in an unregulated epidemic – even if it kills.