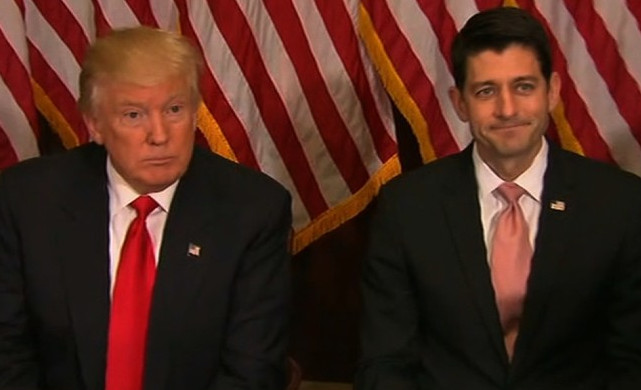 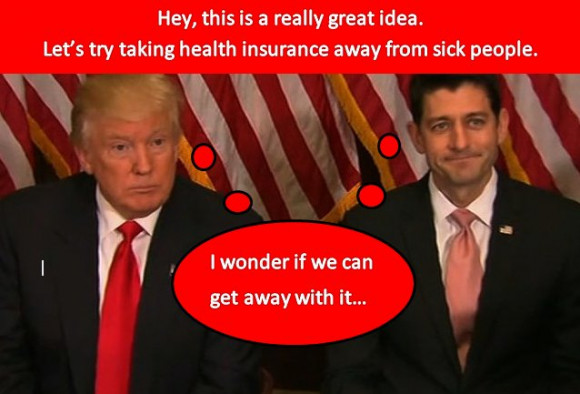 Use the meme above to promote this article on Twitter.

Here We Go Again: This Time Republicans Want To Screw The Ill

The Republicans are taking another try at a healthcare law to repeal parts of the Affordable Care Act (ACA) after their stunning failure to even vote on the American Health Care Act (AHCA). Under the new bill, which has yet to be drafted, the current national requirements for what insurance must cover would be left up to the states to determine; and people with a serious illness could face a massive increase in premiums, putting insurance out of reach for many who need it most.

The Huffington Post’s Johathan Cohn describes the two major changes from the ACA:

One of those rules requires insurers to cover a set of 10 “essential” benefits. These include everything from prescription drugs and hospitalization to mental health and maternity care.

Another rule prohibits insurers from charging higher premiums to people at high risk of getting sick. The wonky term for this is “community rating,” because it means everybody in the community is paying the same price, regardless of health status.

Paul Ryan is lowering expectations refusing to tell The Hill on Tuesday whether the House would hold a vote by the end of the week, as the White House reportedly wants. Roll Call reports that Ryan told reporters on Tuesday morning, after the GOP conference meeting, “We don’t have bill text or an agreement yet.”

The White House is pushing because a two-week spring recess begins at the end of the week, creating a sense of urgency for Republicans who don’t want to return to their districts and face constituents without a healthcare victory or return home and be criticized for another unfinished proposal that leaves people without the insurance they need. Some Members who fear returning home without a completed bill are urging the leadership to delay the spring break and complete the bill. They just do not want to face their constituents with this issue unresolved.

The plan, if it goes forward, seems to be to rush the bill to the House Floor, without new committee review and without a Congressional Budget Office evaluation, by substituting the new bill for the failed ACHA. They need to rush this through because the more this is examined; the more people will see this bill is another terrible deal.

Matt Fuller reports “…there are already more than a dozen moderate Republicans who have announced opposition to the bill, though they could still change their mind.” In addition, there is a lot of bad blood between the Freedom Caucus, The Tuesday Group and the White House and it remains to be seen whether Trump’s threats and bullying tactics will help or hurt their ability to reach agreement.

Ryan said there are ongoing discussions between the White House and members of the Tea Party, Freedom Caucus, and the moderate, Tuesday Group, describing them as: “So right now, we’re just at that conceptual stage about how to move forward in a way we can get everybody to 216 [votes]. … It’s premature to say where we are or what we’re on because we’re at that conceptual stage.”

One key provision of the new bill is to grant states the power to choose to apply for waivers to repeal two ACA regulations that require insurance companies to carry minimal requirements for insurance coverage and to provide insurance to those with pre-existing conditions.

Mark Meadows, the chairman of the Freedom Caucus, described the situation as “There is no deal in principle. There is a solid idea that was offered.”Freedom Caucus leaders said they’re open to the idea but want to see the legislative text. White House officials are hoping to send the text to Capitol Hill as early as Tuesday night. Meadows does not expect an endorsement from the Freedom Caucus but seeks to be able to give Paul Ryan a whip count and says his caucus will not vote as a bloc.

Roll Call reports: “Rep. Justin Amash and the House Freedom Caucus say talks of a deal with the White House on tweaks to legislation that would repeal the 2010 health care law are premature.” They also point to a Freedom Caucus tweet which says “@justinamash is 100% correct & no decision would ever be made by the Freedom Caucus w/out his input.”

On the critical issue of pre-existing conditions the Republicans say they would keep the ACA’s provision that requires insurers to cover people with pre-existing conditions, but would allow premiums to rise making insurance unaffordable for people by allowing states to opt out of ‘community rating’ provisions that keep premiums in line with the community.

Prior to the ACA, insurance companies would raise premiums on people with serious illnesses.  Karen Pollitz, a senior fellow at the Henry J. Kaiser Family Foundation who studied those markets closely, said insurers would routinely charge three to five times what they charged healthy people. In one instance, she said, a Colorado insurer actually sought premiums that were 2,000 times the standard rate.

Republicans would seek to “backstop” for people with pre-existing conditions who are priced out of coverage with high risk pools, which operate by separating the seriously ill out of the insurance market. In reality high risk pools are famously poor substitutes, as Matt Fuller writes:

But a majority of states ran high-risk pools before the Affordable Care Act, and the pools were notorious for high premiums and deductibles, along with annual or lifetime limits on coverage. In other words, the pools lacked the kind of coverage and protections that people with medical problems need ― and they frequently wouldn’t cover pre-existing conditions for six to 12 months.

Some describe the new proposal as making insurance for pre-existing conditions illusory:

Larry Levitt, president of the Kaiser Family Foundation, tweeted: “If there is guaranteed access to insurance without community rating, protections for people with pre-existing conditions are illusory.”

This would violate promises made by President Trump and Vice President Pence who promised continued coverage for those with pre-existing conditions. Combining this with allowing states to opt out of insurance being required to cover prescription drugs or hospitalization destroys any protection for people with serious conditions. Jonathan Cohn writes not only did Trump and Pence make such promises “senators and representatives, veterans and newcomers ― pretty much every Republican made vows like these. And they didn’t just do it once. They did it over and over again.” He correctly points out “the emerging deal would make a mockery of those promises ― by forcing people with medical problems to pay more for their health care, and in many cases leaving them unable to get insurance at all.”

With the embarrassing implosion of the Republican Party over the ACHA, the party is now rushing this vague idea forward in order to pass something, even if it violates promises Republicans made in the 2016 campaign. It seems their view is passing a terrible bill is better than passing nothing, even if it only makes it through one Chamber of Congress. They need to move quickly because as this idea (not even a bill) is examined, its popularity will disappear and once again the Republicans will be pushing something the vast majority of people in the United States do not want.