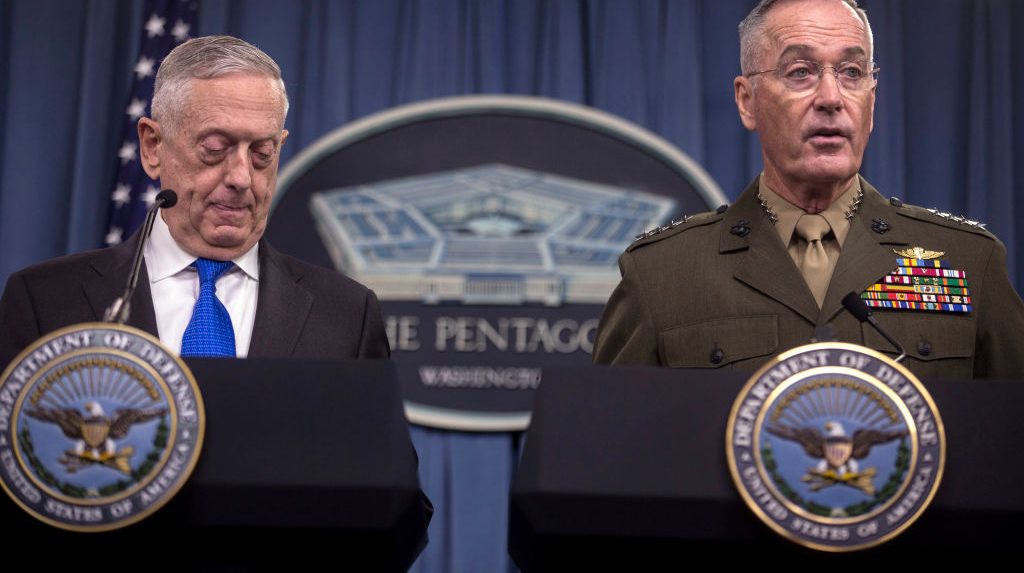 Above Photo: Chairman of the Joint Chiefs of Staff Gen. Joseph Dunford speaks during a press briefing at the Pentagon August 28, 2018 in Arlington, Virginia. Zach Gibson / Getty

The US military budget sucks up an enormous amount of resources without making the world more peaceful or democratic. Here are a few ways we could better spend that $717 billion.

The Pentagon is set to receive $717 billion in 2019 — more than half of the roughly trillion-dollar annual budget. That level of Pentagon funding is immense by any standard. Next year’s budget will be roughly twice the size of military appropriations in the mid-1990s, before George W. Bush and his twin wars in Iraq and Afghanistan. And it will be higher than the peak of Pentagon spending during the Vietnam War.

None of this is necessary. The Pentagon is the least accountable part of the federal government, wasting billions of dollars on needless bureaucracy, pouring billions more into dangerous (and redundant) nuclear weapons, and cozying up to contractors who siphon off roughly half of the Pentagon’s budget each year. Even worse, the never-ending US wars in Iraq and Afghanistan have made the world more dangerous, and American imperialism continues to undermine the autonomy of other nations and peoples.

While profligate Pentagon spending doesn’t make the world more peaceful or more democratic, it does guarantee that the US government will be cash-strapped when it tries to fund vital public programs. Here are a few ways we could be spending our money if we didn’t bequeath the military with $717 billion.

Medicare for All has become a top item on progressives’ policy wish list, raising the ire of conservatives and centrists everywhere. But despite the cries from fiscal scolds, Medicare for All is not as much as might you think: the $717 billion military budget is just about $12 billion shy of the sum needed to expand government health insurance to the 200 million US children and adults who currently have private insurance or no insurance at all. Structured the right way, Medicare for All could even reduce overall US health care costs by as much as $2 trillion.

Free college for all is completely affordable — especially if you have the Pentagon budget at your disposal. The military’s $717 billion could pay full tuition for four years at a public university for 21 million college students — more students than are currently enrolled in all colleges in the country.

At the same time that the $717 billion military bill wends its way toward Trump’s desk, Congress is debating the merits of cutting $24 billion over ten years from food stamps and related assistance for the poor. Together, the proposed cuts and rule changes could result in 3 million Americans losing food assistance.

Trimming the Pentagon budget by $2.4 billion per year — a reduction of less than half a percent — would make up the difference and keep food stamps and its sister programs intact.

Planned Parenthood received $543 million in government funds in its last reported year. Thanks to lots of resistance, attempts in Congress to defund the organization have so far proven unsuccessful. But now women face a new challenge, named Brett Kavanaugh. Trump’s Supreme Court pick is widely believed to be the vote that could overturn Roe v. Wade, or at least weaken it past recognition. Technically no federal funds are used to pay for abortions (an absurd restriction that should be reversed), but the Pentagon budget could fund services like birth control and gynecological exams at the current funding level until the year 3336.

The only way to slash carbon emissions is by taking aggressive action at the federal level. That will be costly. But fortunately, there’s a bloated Pentagon budget we can draw on.

Aside from clean energy, the United States is in desperate need of new infrastructure investment for roads, bridges, public water systems, schools, and more. Millions of Americans drink tap water that isn’t up to public safety standards. The American Society for Civil Engineers gave the United States a D+ for its infrastructure on their most recent report card. Since the United States is $2 trillion shy of the needed funds for repairs over the next ten years, a 28 percent cut to Pentagon funding — from $717 billion to $513 billion, still higher than during the 1990s — would cover the difference.

The military budget crowds out spending that could make America more just. And the costs to countries where the US wages war are even higher. The invasions of Afghanistan and Iraq have killed hundreds of thousands of people and caused 10 million to be displaced or flee their homes. Meanwhile, at home, millions struggle to meet their basic needs. Paring back the Pentagon budget by $300 billion — a modest step that would still leave it at 1990s levels — would free up resources for domestic needs while weakening the military’s ability to do harm abroad.

It’s not national security that drives this spending. But human security could be the rationale for cutting it.