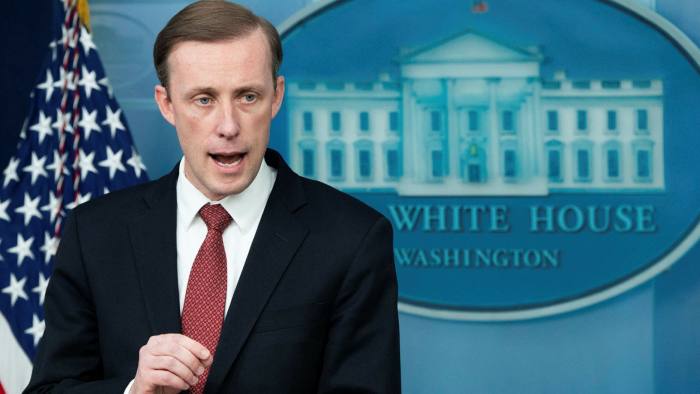 Above Photo: Jake Sullivan will lead a delegation of US National Security Council and state department officials for talks in Rome with China’s top foreign policy official. Saul Loeb / AFP/Getty.

The US is warning China of ‘consequences’ if it helps Russia evade US sanctions.

On Monday, National Security Advisor Jake Sullivan held seven-hour talks in Rome with Yang Jiechi, one of China’s top foreign policy officials. According to the White House, the two officials had a “substantial discussion” on Russia and Ukraine.

In recent years, China and Russia have grown closer together as they both have faced similar pressure from the US and its allies. A Biden administration official told reporters that the US has “deep concerns about China’s alignment with Russia at this time” and said Sullivan warned China of potential “consequences” for certain actions.

“What we have conveyed — and what was conveyed by our national security adviser in this meeting — is that, should they provide military or other assistance that of course violates sanctions or supports the war effort, that there will be significant consequences,” White House Press Secretary Jen Psaki said.

Psaki wouldn’t elaborate on what sort of “consequences” China could suffer if it helps Russia. The Sullivan-Yang talks came after US media reports said Russia was seeking military equipment from China, which both Beijing and Moscow denied.

For their part, China is warning against unsubstantiated rumors about Beijing’s stance on the fighting in Ukraine. “Yang Jiechi stressed that China firmly opposes any words or deeds that spread false information, distort or smear China’s position,” a Chinese media report said about the meeting, according to The South China Morning Post.

The Chinese report said Yang told Sullivan that the war in Ukraine has “reached a point” China did not want to see. “China is committed to promoting peace talks, and the international community should jointly support the Russia-Ukraine peace talks, achieve substantive results as soon as possible, and promote the cooling of the situation as soon as possible,” the report said.