Higher Education Workers Are Organizing For Their Own Safety

Above photo: A sign alerting people that masks are required on campus seen at Bloomsburg University, in Bloomsberg, Pennsylvania, on February 6, 2021.Paul Weaver/SOPA Images/Lightrocket via Getty Images.

In Arizona, two universities are spearheading an effort to unionize the entire state’s higher education workforce.

President Biden included $35 billion in funding for higher education in his American Rescue Plan. If this aid makes it into the final Covid relief law, college and university employees across the country will no doubt applaud.

The pandemic has hit this sector hard. Around 260,100 university employees (14.6 percent of the total workforce) have lost their jobs since February 2020. Staff also make up most of the Covid-19 deaths on college campuses.

But while federal funding is welcome, it is no guarantee of equitable treatment for higher education workers. Economic disparities and unsafe working conditions are motivating staff on a growing number of college campuses to build power through union organizing.

One of the most ambitious university organizing efforts is taking place in Arizona. Late last year, staff at two schools — the University of Arizona and Arizona State University — formed United Campus Workers Arizona Local 7065, a “wall-to-wall” union representing all of the schools’ employees. The union now aims to organize all higher education workers throughout the Grand Canyon state. 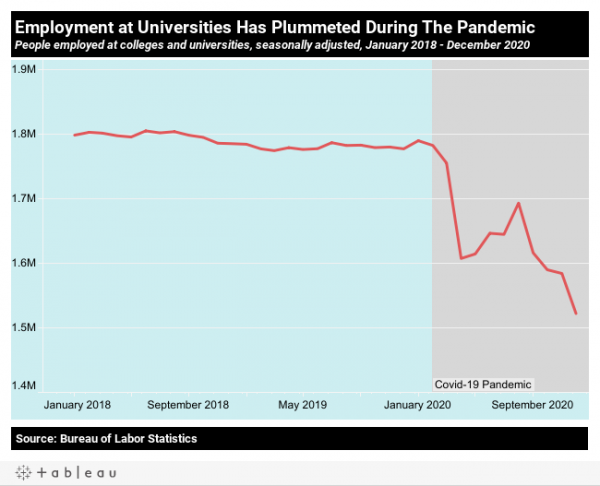 At one point, Arizona had one of the highest Covid-19 transmission rates in the world, and yet many university workers were still being sent back to schools without proper precautions while others were facing furloughs and layoffs.

“The administration’s seeming prioritization of financial issues over its employees’ health was alarming,” Laurie Stoff, a professor and one of the organizers of the unionization effort at Arizona State University, told Inequality.org. The university’s president, Michael Crow, dismissed scientific standards for reopening schools as “inappropriate” at the college level.

But the frustrations that boiled over during the pandemic had been simmering for a long time, Stoff explains. All but the most secure tenured ASU professors have “at will” employment status, meaning they can be terminated without any justification.

“This has made it much easier for the university to keep workers quiet, as they are afraid to speak out against their mistreatment,” Stoff said.

Long before the pandemic, many lower-level ASU employees weren’t making a living wage and were struggling with rising healthcare costs, which, when combined with a lack of cost-of-living wage increases, amounted to pay cuts.

Stoff said lower-level employees’ economic insecurity is particularly grating because of the stark contrast with those at the top end of the university’s pay scale. President Crow made $1.15 million in 2019, the 10th-highest salary among U.S. public university presidents. The school’s football coach made three times as much, with $3.5 million in pay that year. They also just boosted the pay for the Vice President for Athletics by $150,000 and gave him a $500,000 bonus, while telling faculty and staff that they won’t receive any salary increases due to the pandemic.

These disparities are not unique to the Arizona. Across the country, full-time professors with tenure make up a rapidly shrinking share of university employees as schools seek to slash labor costs. Given the added strain of the current crisis, it’s perhaps unsurprising that multiple staff and student unions have signed union contracts during the pandemic, most recently at Augsburg University in Minneapolis.

Stoff hopes that the union can pressure university leaders to pay greater attention to the needs of all of its employees. Thus far, she says, ASU has paid lip service to institutional changes that would benefit the lowest-paid workers on campus, who are disproportionately workers of color. “Many of the demands of groups representing the interests of students and workers of color have fallen on deaf ears and are largely ignored.”

The union also aims to secure a living wage and greater job security for all employees, increased health care benefits for graduate students and adjuncts, and stronger protections against Covid-19. These gains for employees, Stoff insists, would be good for everyone.

“The union is not the enemy of the school,” she said. “We want to create the best possible working environment at the university, which is also our students’ learning environment.”