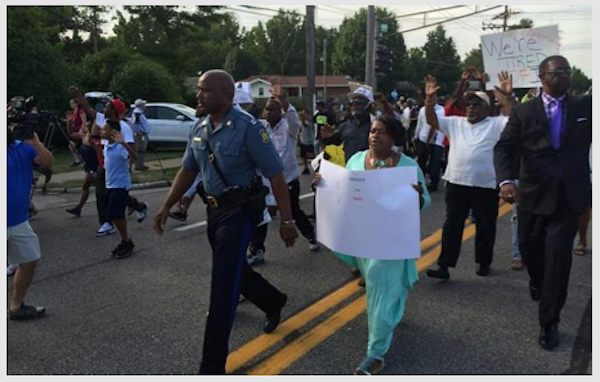 On Thursday afternoon Missouri State Highway Patrol Captain and 27 year veteran of the force, Ronald S. Johnson, was announced to be taking over security decisions in the outraged city of Ferguson.

Local law enforcement intends to stay involved, but highway patrol is now directly on the ground.

During the press conference held by Governor Nixon, Johnson stated, “We are going to have a different approach and have the approach that we’re in this together”, and so far, he wasn’t lying.

People online watched tweets with baited breath waiting for the tear gas, swat, and violence from police we have seen in recent days. Except that didn’t happen.

What did happen was an amazing show of what happens when police remove their helmets and treat people with dignity, and it was beautiful.

“When I see a young lady cry because of fear of this uniform, that’s a problem. We’ve got to solve that.” Johnson said.

The new man in charge assured the crowd there would be no blocked streets, no more disproportionate force, and actually marched side by side with the protestors.

“They respect us, so let’s respect them. They’ve given us the sidewalk so lets stay out of their street.”

Ron Johnson, Mo. highway patrol: I grew up in Ferguson. Our police officers will respect anger, fear people are feeling.

Even if this is a PR stunt, it still makes a great case against militarized police.  Put away your tanks and take off your helmets… and you no longer need them.  If our police stopped killing unarmed people and treating every citizen as a criminal, there would be peace.