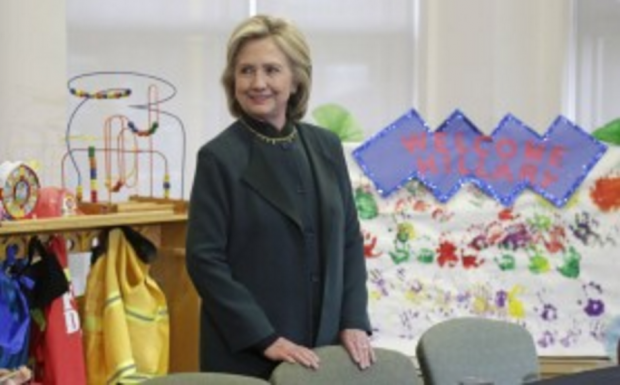 As pressure increases for 2016 presidential contender Hillary Clinton to say where she stands on the pending Trans-Pacific Partnership(TPP) trade deal, her ties to avid TPP supporters won’t escape notice.

One glaring example: A linked trifecta consisting of the TPP, the mega-investment firm Morgan Stanley, and the Clinton family that involves campaign contributions, former members of Bill Clinton’s administration and large donations to the Clintons’ foundation.

Morgan Stanley is one of many U.S. companies supporting the TPP. It’s a member of the U.S. Business Coalition for TPP, and since 2013 the firm has lobbied on issues pertaining to the agreement. According to reports filed by the company and its lobbyists, Morgan Stanley spent $4.04 million in 2013, $4.82 million in 2014 and $530,000 in 2015 (thus far) lobbying on a slew of issues, including TPP. Lobbying disclosure rules don’t require a breakdown of how much is spent on any particular matter, so it’s impossible to know exactly how much of Morgan Stanley’s budget was devoted to the pending deal.

Morgan Stanley’s role in the Clinton orbit is multifaceted. Thomas R. Nides, the firm’s current vice president, was deputy secretary of state for management under Clinton and is considered a close confidant, though he won’t be taking up a formal role in her 2016 campaign. Nides was also Morgan Stanley’s chief operating and administrative officer prior to joining the State Department, and served as chief-of-staff to former U.S. Trade Representative Mickey Kantor in the 1990s.

Then there are two prominent alumni of former President Bill Clinton’s administration who serve on Morgan Stanley’s board of directors: Erskine Bowles (its lead director) and Laura Tyson.

Bowles, a fiscal hawk known for his 2010 Simpson-Bowles deficit reduction plan with former Sen. Alan Simpson (R-Wyo.), served as administrator of the Small Business Administration and as Clinton’s chief-of-staff. He also sits on the board of directors at Facebook, another member of the U.S. Business Coalition for TPP.

Tyson, for her part, was Bill Clinton’s first chair of the Council of Economic Advisers (CEA), and in March, Tyson — a longtime University of California at Berkeley professor — sent a letter to Congress that she wrote with other former CEA chairs advocating in favor of the TPP and trade promotion authority.

Tyson supported Hillary Clinton during her 2008 presidential campaign, and was far from the only person tied to Morgan Stanley to do so. In fact, over the course of Hilary Clinton’s political career — two successful Senate campaigns and a failed presidential bid — she has received more than $543,000 from the company’s PAC and employees, making it her sixth biggest donor.

Morgan Stanley has also been a generous supporter of the Clintons’ foundation work.

In September 2014, Morgan Stanley announced that it, along with the Local Initiatives Support Corp. (LISC) and CDC Small Business Finance, had made a “$25 million Clinton Global Initiative (CGI) Commitment to Action for an expansion of the Job Creation and Community Revitalization Fund.”

It’s no secret that the Clintons have powerful allies in the business community. Whether she tacks in the direction of her previous support for the deal and makes those allies happy, or toward the liberal wing of the party that is far more suspicious of the agreement, the building pressure will make it hard for Hillary Clinton to keep silent on crucial aspects of the issue much longer.