Note: The North Dakota justice system continues to show itself to have standards that insure injustice including the behavior of militarized police, corporate mercenaries abusing people, the sheriff and prosecutor over-charging non-violent water protectors, inadequate numbers of defense attorneys and now the court system allowing trials to go forward in violation of basic standards of due process.  The article below summarizes the injustices and asks whether justice can be served in North Dakota — unless there are some dramatic changes, the answer is a resounding “no.” 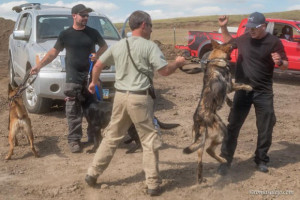 Now North Dakota is in a self-made legal crisis, created by their overzealous response to the #NoDAPL protests. Since Governor Jack Dalrymple declared  a state of “emergency” on August 19th, arrests have increased dramatically from 28 to more than 500.  In addition to this creating tremendous costs to the legal system, it has created an impossible situation regarding legal representation. The Wisconsin Media Coop reports “to date, 79 North Dakota attorneys have been assigned 265 cases; but the need is not yet met. As of December 2, 2016, court records list fully 264 defendants as being without counsel. Of these 264 defendants, at least 113 applied to be represented by public defenders were denied, in which some of these denials likely to be reversed upon correction and/or completion of paperwork.” The lack of counsel has been made worse by prosecutors over-charging “139-some defendants arrested on October 27, 2016 was charged as a co-conspirator to a felony.” This makes it more likely people will go to trial and each defendant will require separate counsel in order to avoid conflicts of interest. 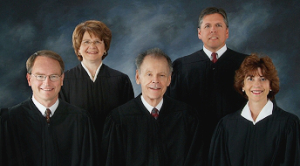 A petition filed by nine North Dakota law firms asks the North Dakota Supreme Court to allow out of state lawyers to represent these defendants. The petition says: “These events are of a historic scale. Petitioners know of no other time in which comparable strain has been placed on court system, relative to its size, by such a surge of arrests.”  Comments on the petition were closed on December 30th.

We urge people to share this article widely and urge national legal organizations like that National Lawyer’s Guild, American Civil Liberties Union, the National Association of Criminal Defense Lawyers and the American Bar Association as well as the North Dakota Bar to join in urging the sheriff, prosecutor and courts to take action.  We urge legal associations to work in conjunction with the Water Protector Legal Collective to resolve these issues as well as to seek civil court resolution of these violations of human rights.  Action needed, under the leadership of the Water Protector Legal Collective. includes reducing the charges to stop the over-charging for non-violent Water Protesters, working with defense lawyers to find an acceptable resolution to these cases that does not include extreme fines or jail sentences and allowing out-of-state lawyers to join in these cases.

The United Nations Human Rights Council, the US Department of Justice as well as private human rights groups should investigate this crisis of injustice and take action to ameliorate it.  KZ

Is Justice Possible in North Dakota?

As the trials for the water protectors opposed to the Dakota Access Pipeline (DAPL) proceed in Mandan, the question becomes, is it possible for justice to be served in North Dakota? Consider the facts:

According to Angela Bibens, an attorney from Colorado and a member of the Water Protector Legal Collective (WPLC), the conditions of North Dakota’s legal system at present are making it impossible for fair trials to take place due to several factors.

The Morton County Sheriff’s department made the decision to take a hard-line, militarized position in its response to the nonviolent activities of unarmed water protectors. This includes the use of water cannons, flash bang canisters, rubber bullets, and mace, which resulted in hundreds of water protectors being injured at the front lines.

As of August 19, 2016, there were just 28 DAPL-related arrests. By mid-December, 500 more people have been arrested and charged. This was a crisis of their own making, which has cost the state over $17 million in law enforcement fees. 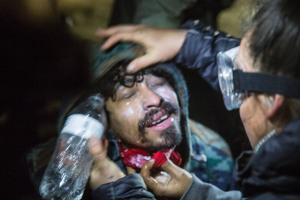 Water protector being treated by a medic after being tear gassed. Photo: Adam Alexander Johansson.

A joint trial would deprive defendants of their constitutional right to representation and of due process of the law. “So in my mind as a defense attorney,” says Bibens, “this is a miscarriage of justice. Whatever the outcome is, due process is not going to be delivered to these water protectors by the way these trials have been set up.”Because of the large numbers of defendants, the court initially allowed 10 water protectors to be tried together in a joint trial, even though not all of them were arrested in the same place or for the same circumstances.

Water protectors have also be met with new charges that were not included with their original ones. According to water protector Kelli Love, “Eight hours before we showed up to our pretrial last week, we arrived to court and we saw that not only disorderly conduct charges, but a list of other trumped up charges had been added without our knowing, which is already a violation of due process.”

Hours before the December 19 trials of Benjamin Schapiro and Steven Voliva, who were accused of blocking traffic to enable a caravan of water protectors to pass uninterrupted, Voliva’s attorney William Thomason objected to going to trial due to the absence of a key police report. Nobody from the Morton County State Prosecutors office was in attendance to address Thomason’s request for continuance. However, Judge Bruce Romanick denied the request four hours before the trial saying, “We’ve got to keep moving. That’s how our system works.”

Judge Romanick ordered Schapiro to remove his yarmulke as he entered the courtroom. Both defendants were found guilty of obstructing a highway and disorderly conduct. In addition to fines of $1,285, Judge Romanick ordered them to pay all court costs, plus $500 for “restitution to law enforcement” and another $500 for reimbursement for their public defenders telling them, “you can get a job to pay those costs back.”

A group of attorneys licensed in North Dakota has petitioned the North Dakota Supreme Court to allow out-of-state attorneys to represent the water protectors. According to the petition, never before in the history of the State has there been such conditions that would sweepingly disallow the constitutional rights of so many.

WPLC called for the resignation of acting Morton County State’s Attorney Ladd Erickson after he filed a motion to hold indigent water protectors liable to repay the state for their court appointed lawyers, while belittling and calling them “props” and their movement a “protracted manufactured spectacle.” 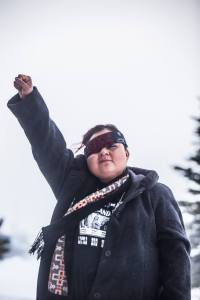 Water protector Vanessa Dundon lost the sight in her right eye after being struck by a tear gas canister. Photo: Adam Alexander Johansson.

This effectively discredits all of the reasons the defendants were taking action in the first place, and unjustly prevents them from including the merits of the power of prayer, the violation of treaty rights, and their cultural responsibility to protect the water as a means to defend themselves.Erickson has filed a special “motion in limine” in which the he argues that certain defense strategies need to be excluded: “There’s no relevance to any testimony or evidence regarding historical treaty, tribal sovereignty, the merits of the Dakota Access pipeline, climate change, sacred sites, corporate power, corporate media or any other social or political cause.”

However, in December 2015, Erickson argued just the opposite.

In an editorial about Marsy’s Law,  a proposal to change the constitution to protect and expand the legal rights of victims of crime Erickson wrote, “Never, in any reading of our country’s or state’s history, or in the history our state and federal constitutions, have I found a glimmer of support for the concept that a constitution should be used to shield evidence of innocence from a person accused of a crime, and at the same time grant the control over whether that evidence gets disclosed to the same person who falsely accused someone of a crime to begin with,” Erickson said.

As the prosecution of the water protectors continues, it appears that defendants are being deprived of their constitutional rights. North Dakota law enforcement and the judicial system seem to be stacked against them. Regardless of which side of the pipeline issue one takes, the lack of due process should concern everyone.