An Historic Opportunity To Transform Trade When We Stop NAFTA II

Donald Trump was right when he said that the North American Free Trade Agreement (NAFTA) has been a disaster for the United States and promised to renegotiate it when he became president. However, the renegotiated NAFTA-2 is worse than the original NAFTA and should be rejected.

Popular Resistance is in its end-of-the-year fundraising drive.
Click here to make a tax-deductible donation today.

On December 1, NAFTA-2 was signed by President Trump, Prime Minister Justin Trudeau of Canada, and Mexican President Enrique Peña Nietos. This started the process of approval by the legislatures of each country.

Our movement for trade that puts people and planet first now has two synergistic opportunities: We can stop NAFTA II and replace corporate trade with a new model that raises working conditions and protects the environment. 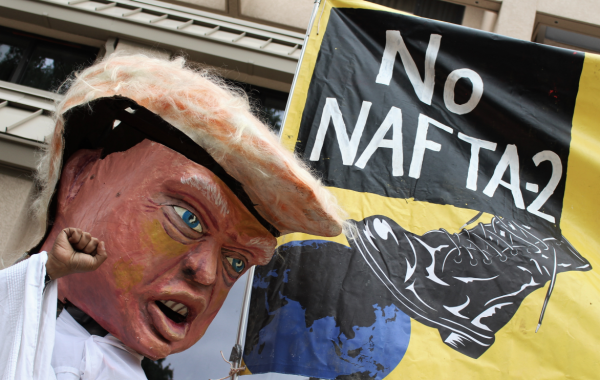 No NAFTA -2 from Popular Resistance.

When NAFTA became law on January 1, 1994, it began a new era of trade – written by and for transnational corporations at the expense of people and planet. President George H.W. Bush failed twice to pass NAFTA. During Bush’s re-election campaign, independent Ross Perot described NAFTA as the “giant sucking sound” that would undermine the US economy.

President Clinton was able to get it through Congress. The Los Angeles Times described that vote as “a painfully divided House of Representatives” voting a 234-200 for NAFTA. A majority of Democrats 156-102 opposed NAFTA. During the debate, protesters were ejected when they showered fake $50 bills that said “trading pork for poison” from the visitors gallery.

In the 2016 election, President Trump showed he understood what the United States experienced — NAFTA was bad for the people undermining manufacturing and agriculture. People want it repealed. Unlike Hillary Clinton, Trump had his finger on the pulse of the population.

NAFTA-2 is another trade agreement designed for corporate profit. Trump trade fails to provide enforceable protections for workers or the environment. In this time of climate crisis, it does not mention climate change. It fails to protect the food supply and will result in increased cost of medicines.

Citizen’s Trade Campaign writes, there are positive labor standards “but only if currently absent enforcement mechanisms are added.” As the Labor Advisory Committee states, “Unenforced rules are not worth the paper they are written on.”

The Sierra Club reports NAFTA-2 takes a significant step backward from environmental protections included in the last four trade deals by failing to reinforce a standard set of seven Multilateral Environmental Agreements that protect everything from wetlands to sea turtles.

NAFTA-2 allows intensely-polluting oil and gas corporations involved in offshore drilling, fracking, oil and gas pipelines, refineries, or other polluting activities to challenge environmental protections in rigged corporate trade tribunals. Trump Trade preserves a NAFTA rule that prevents the US government from determining whether gas exports to Mexico are in the public interest. This creates an automatic gas export guarantee, which will increase fracking, expand cross-border gas pipelines, and increase dependency on Mexican climate-polluting gas.

Food and Water Watch summarizes: “The energy provisions will encourage more pipelines and exports of natural gas and oil that would further expand fracking in the United States and Mexico. The text also provides new avenues for polluters to challenge and try and roll back proposed environmental safeguards, cementing Trump’s pro-polluter agenda in the trade deal.”

NAFTA-2 undermines food safety and health by making it more difficult to regulate and inspect foods. It limits inspections and allows food that fails to meet US safety standards to be imported. NAFTA-2 serves Monsanto and other giant agro-chemical corporations by allowing unregulated GMOs, rolling back Mexico’s regulation of GMOs, and letting chemical giants like Monsanto and Dow keep data on the risks of their pesticides secret for 10 years. NAFTA-2 is designed for agribusiness, not family farmers and consumers.

NAFTA-2 increases the cost of pharmaceutical drugs through intellectual property protections that go “significantly beyond” NAFTA. Trump’s NAFTA-2 gives pharmaceutical companies a minimum 10 years of market exclusivity for biologic drugs and protects US-based drug companies from generic competition, driving up the price of medicine at home and abroad.

All the ingredients that led to a mass movement of movements that stopped the Trans-Pacific Partnership  exist to stop NAFTA-2. Citizens Trade Campaign sent a letter signed by 1,043 organizations to Congress outlining civil society’s shared criteria for a NAFTA replacement. The requirements outlined in this letter have not been met.

Just as it became impossible across the political spectrum to support the TPP, we can make it impossible to support NAFTA-2. Democrats are signaling NAFTA-2 is not going to pass in its present form. After Robert Lighthizer met with Democratic Leader Nancy Pelosi last week, she described NAFTA-2 as “just a list without real enforcement of the labor and environmental protections,” that would be unlikely to pass in its present form. We can stop NAFTA-2. 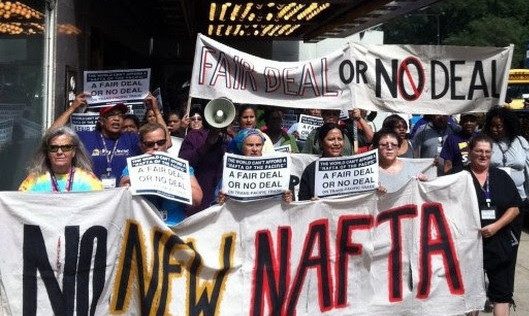 No Ne NAFTA protest, Fair Deal or No Deal from Green Watch

Defeat of NAFTA-2 Creates the Opportunity to Transform Trade

The defeat of NAFTA-2 will show that corporate trade will no longer be approved by Congress.  Trade must be transformed to uplift workers, reduce inequality, confront climate change and improve the quality of our food and healthcare. The defeat NAFTA-2 opens the space to make transforming trade a major issue in the 2020 presidential campaigns.

A smart presidential campaign will use the defeat of NAFTA-2 as an opportunity to begin a new era of trade transformed for the public good, serving the many, not the few. Politicians running for president in 2020 can put forward a vision of trade that the people will support.

Already, Senator Elizabeth Warren (MA) has taken initial steps in this direction. In a speech to American University, Warren said she opposed Trump’s NAFTA-2 agreement, challenged the bipartisan embrace of “free” trade, and called for starting “our defense of democracy by fixing” corporate trade. In discussing trade she said, “Wow. Did Washington get that one wrong.”  She described trade as delivering “one punch in the gut after another to workers…” She urged, “We need a new approach to trade, and it should begin with a simple principle: our policies should not prioritize corporate profits over American paychecks.” This is a start, if she adds the environment, climate change, healthcare, food safety, sovereignty and Internet freedom, she will put forward a vision of smart trade that will bring millions to support her.

Warren is not alone, Senator Sherrod Brown (OH), who easily won re-election in Ohio and is considering a presidential run, has been a longtime advocate for trade that lifts up workers and challenged agreements that failed to do so. Brown sent a letter to the president eight days after the 2016 election urging Trump to keep his trade promises. Brown voted against NAFTA in one of his first acts as a member of Congress in 1993 and wrote a book entitled “Myths of Free Trade: Why American Trade Policy Has Failed.”

Transforming trade, by rejecting corporate trade, creates an opportunity for candidates to turn a negative issue into a positive one. The movement needs to demand candidates put forward a new vision for 21st century trade.

A Vision for Trade for People and Planet

We must put forward the vision for trade we want to see as part of the campaign to stop NAFTA-2. Trade in the 21st century needs to confront multiple crisis issues made worse by trade designed for corporate wealth. Transformed trade needs to focus on the public interest.

Pubic interest includes shrinking inequality within the United States and between nations. It means workers having a livable wage, encouraging worker-ownership of businesses so they grow their wealth not just their incomes. Trade should strengthen the rights of workers to organize, create unions and adhere to International Labor Organization standards.

There are numerous environmental crises that trade needs to address. Three reports, the dire October 2018 IPCC report, warning we have 12 years to transform the energy economy to prevent climate catastrophe, the November 23, 2018 4th National Climate Assessment, which warned of the serious impacts of the climate crisis and the Global Carbon Project which reported carbon emissions are at record highs, show climate change must be central to trade policies.

International trade needs to be re-formulated to protect the labor, human rights, economy, environment and domestic industry of partner and recipient nations so local industry and agriculture has the advantage over foreign corporate domination. Trade needs to guarantee people their right to public ownership and control of their own resources. Trade agreements must protect the rights of nations to establish stricter standards for health, safety, human rights and environmental protections.