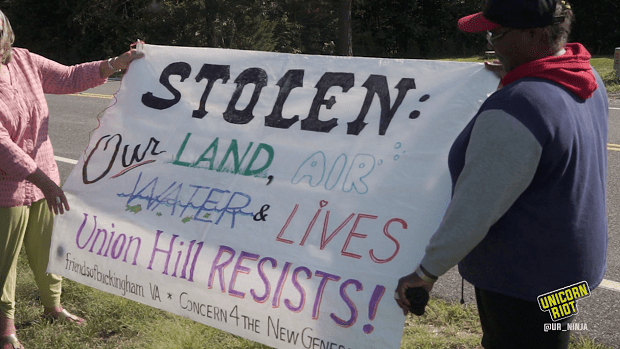 Buckingham County, VA – Earlier this month, activists kayaked the James River along the planned route of Dominion Energy’s Atlantic Coast Pipeline (ACP). The pipeline route goes from West Virginia to North Carolina with plans to connect it to the Transco line, also in Union Hill, where the two will intersect and connect to export facilities.

This plan for pipeline expansion threatens to negatively impact watersheds in Richmond; Washington, DC; and other nearby areas. The pipeline will also cross the territories of four native tribes, a fact that some say was overlooked during approvals issued by the Federal Energy Regulatory Commission (FERC).

Dominion plans to build a large compressor station for the pipeline in Union Hill, a historic Black community founded by descendants of freed slaves in unincorporated Buckingham County near the Cumberland State Forest, west of Richmond. Local residents see the pipeline company’s disregard for their community as part of an established history of environmental racism in Virginia.

“As African-Americans living in a county where racial inequality and retaliation have been facts of life for over 300 years, where many of their ancestors were enslaved, the community of Union Hill’s lack of access to political decision-making makes them vulnerable to Dominion Power’s corporate profit-making plans.” – Lakshmi Fjord, anthropologist and activist with Friends of Buckingham County.

The kayak actions were carried out to call on the Virginia Department of Environmental Quality (DEQ) to not defer to the Army Corps of Engineers decision when issuing permits to projects that threaten water quality. Organizing groups included Friends of Buckingham County, Allegheny-Blue Ridge Alliance, Friends of Nelson County, and Yogaville Environmental Solutions.

“My church community is in the ground-zero zone of Dominion’s dangerous compressor station. This project would only propel fracked gas through our community, leaving us with toxic emissions, pounding noise, and explosion danger. We refuse to be sacrificial lambs for the sake of private profits. Getting arrested is a small sacrifice to stop the destruction of our peaceful, rural community.” – Pastor Paul Wilson, Friends of Buckingham County

Protests and direct actions against the Atlantic Coast Pipeline are expected to continue as construction moves forward.