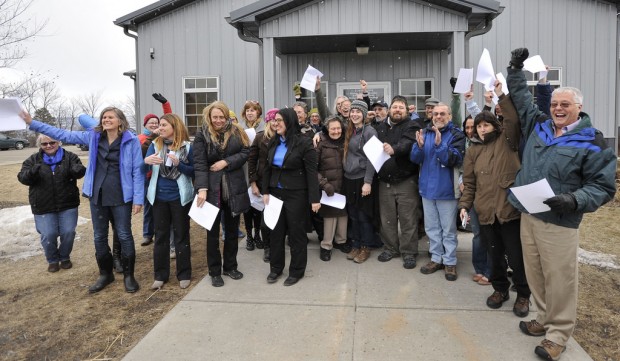 Above: Seneca Lake activists celebrate dismissal of charges. Source We Are Seneca Lake.

Watkins Glen, NY – In three speedy hearings on Wednesday night in the Town of Reading court, Judge Raymond Berry granted a motion to dismiss all charges “in the interests of justice” brought by 42 Seneca Lake protesters. All had been arrested as part of a sustained civil disobedience campaign at the gates of Crestwood Midstream.

The campaign, We Are Seneca Lake, opposes the expansion of gas storage in abandoned lakeside salt caverns owned by Crestwood.

Further, attorneys for the defendants announced that an agreement had been reached with the Schuyler County district attorney’s office to accept identical dismissal motions from the roughly 100 other civil disobedients also charged with trespassing and disorderly conduct relating to protests at Seneca Lake and whose cases are still pending. At least 20 cases have been transferred to other area courts in Schuyler County.

Individually and in groups, the defendants who appeared before Judge Berry on Wednesday night submitted an oral motion asking for dismissal of their charges. They read from a statement that said,

We only have this planet. We must safeguard it for those who follow. Would that it not be necessary, but sometimes citizens of good conscience must engage in non-violent acts of civil disobedience to protect that sacred trust. As long as Crestwood Midstream Partners, or any other corporate or public or private entity, continues to threaten our way of life by the proven dangerous storage of highly compressed gas in the crumbling caverns at the Salt Point facility, I reserve the right to act as my conscience dictates in order to protect Seneca Lake, its citizens, and the surrounding environment. I reserve all rights to protest further at the Crestwood facility, although it is not my intent at this time to break the law in doing so.

After each recitation, assistant district attorney John Tunney expressed his willingness to accept a motion to dismiss. In each case, Judge Berry granted the motion and dismissed the charges “with prejudice.”

The proceedings were remarkable for the commendation offered to the protesters by Judge Berry, who has not always been fulsome in his praise for their actions during the five-month-long campaign that has seen maximum fines and jail sentences.

To one group of defendants, Berry said, “I’m very proud of you. You had a cause and you fought for it to the best of your ability. Congratulations.”

To another, he said, “I’ve grown to admire you people.”

Defense attorney, Sujata Gibson, who has worked closely with protesters since December, said, “This is a big moment in history to have this many cases dismissed in the interests of justice. It affirms the importance of this cause and the ethical motivations of the protesters. I’m sure the court and district attorney’s office were in a very difficult position, and they should be applauded for the thought they put into looking for outcomes that promote justice.”

Gibson continued, “We’ve seen a sea change in the way the court and the prosecutors have reacted to our cases—from maximum sentences for jail terms for trespassing violations to large-scale offers to support dismissals in the interests of justice. This is a testament to the sincerity and passion of the protesters. They are single mothers, wine makers, business owners and teachers. Their stories are deeply affecting. I’ve watched Judge Berry and the D.A. become very moved by the willingness of these human beings to make enormous sacrifices. I myself have been deeply moved.”

Protester Michael Dineen, who had previously been sentenced to jail by Berry for a protest-related act of trespassing and had a similar charge dismissed on Wednesday, said, “I am extremely proud to be part of a community that is willing to be arrested in such numbers to prevent Crestwood’s plan to industrialize our region and threaten our lake. And I’m thankful that the Schuyler County DA’s office has recognized that ‘we all have an obligation to protect our environment,’ and that justice is therefore best served by dismissing all charges.”

Protesters whose charges were dismissed last night were:

Read more about the arrested protesters at http://www.wearesenecalake.com/seneca-lake-defendes/.