As one door sharply bangs shut in Kashmir, another opens in Argentina. That is the nature of our struggles. In 1859, Friedrich Engels wrote, ‘History often proceeds by jumps and zig-zags’. To imagine history as a linear line that moves in a progressive direction is bewilderingly incorrect. It is romantic to believe either that history is conservatively circular – so that change is fundamentally impossible – or that history is progressively linear – so that everything improves in a scientific manner. Neither is plausible.

Human history is a struggle between the imagination for a better life and the constraints of the present. Some of these constraints are material, and some are social. Inadequate material conditions and the rigidities of class can hold back human progress.

The undemocratic attack on the people of Kashmir comes at the same time as the people of Argentina voted in their primary to overwhelmingly say that they are fed up with the politics of austerity (please see our Dossier no. 10 from November 2018 on the crisis in Argentina and the role of the IMF). Argentina’s population will vote again in October. By all indications, they will throw out their President, Mauricio Macri. Musicians and militants in Argentina have taken the old Italian partisan ballad (Bella Ciao – Goodbye Beautiful) and refashioned it as a cry against neoliberalism and austerity (Macri Chau – Goodbye Macri).

In December 2019, our Dossier no. 23 will do an overall assessment of the situation in South America after the October elections in Argentina, Bolivia, and Uruguay. Dilma Rousseff, Brazil’s former President, reflected on the results of the primary in Argentina with the thought that this was a ‘light at the end of the tunnel for Argentina and for Latin America’.

History might move in zig-zags, but in temporal terms it is bewildering. Large numbers of significant events seem to strike us at faster and faster rates. It is hard to keep up with the news, let alone follow what is going on in each country. Tragedies appear suddenly and the names of communities that are little known fly off our lips – The Yazidis! The Rohingyas! In the next instance, they are forgotten, only to be replaced by the next calamity. Even as events rush by, history seems to be at a standstill. Nothing really changes. Lives remain precarious, days seem repetitive. The combination of what appears to be the speed of change with the experience of stasis is what is disorienting.

To provide a modest map to navigate some of these events, Tricontinental: Institute for Social Research will produce a regular Red Alert – a brief two-page assessment of key crises that can be easily printed out and distributed. We hope that you do so in your movements. The first – which is below – is on Kashmir. The PDF of this Red Alert #1: Kashmir can be downloaded here. 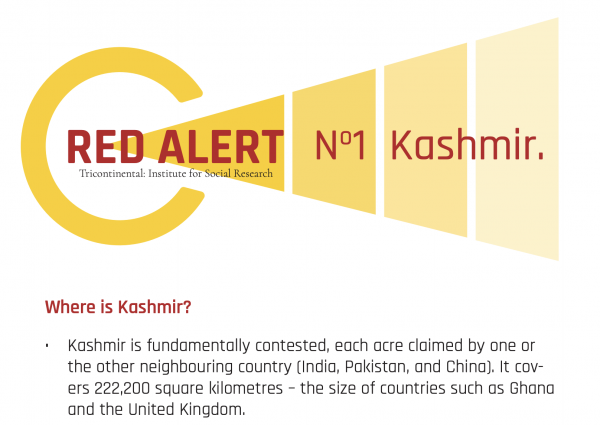 What is the permanent problem of Kashmir?

What is the current crisis in Kashmir?

What is the geopolitical impact of the Kashmir crisis? 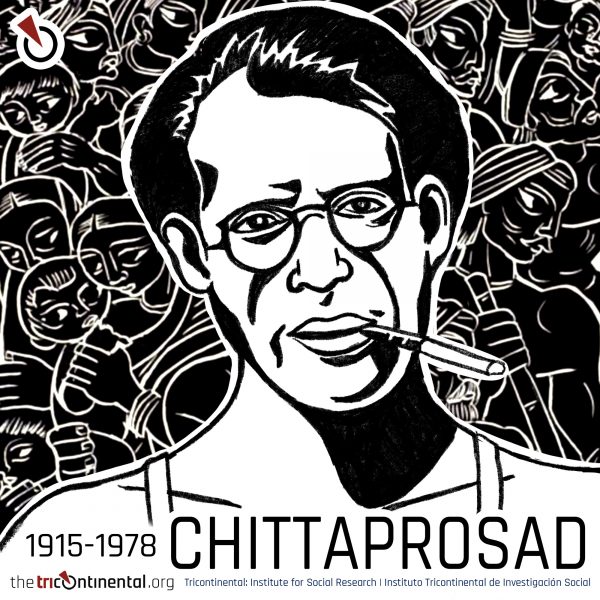 The drawing above is from Chittaprosad, one of the great Communist artists of his day. ‘In my artwork, I represent the tradition of moralists and political reformers’, Chittaprosad wrote. ‘To save people means to save art itself. The activity of an artist means the active denial of death’. No wonder he drew that powerful picture for Kashmir in 1946.

Our comrades Maimoona Mollah, Kavita Krishnan, Jean Drèze, and Vimal Bhai went to Kashmir on a fact-finding mission from 9 to 13 August. They returned with a harrowing tale, whose report must be widely shared. ‘The whole of Kashmir is, at the moment, a prison, under military control’, they write.

The hospitals in Jammu & Kashmir fill up with injured civilians. Journalist Mudasir Ahmad visited the Lal Ded maternity hospital in Srinagar. He met Bilal Mandoo and Raziya, who were sitting with their stillborn baby. Stuck in the curfew, complications at the birth led to the death of their child. They are trapped in the hospital. ‘I feel like I’m choking here’, says Raziya. She speaks for all Kashmiris.