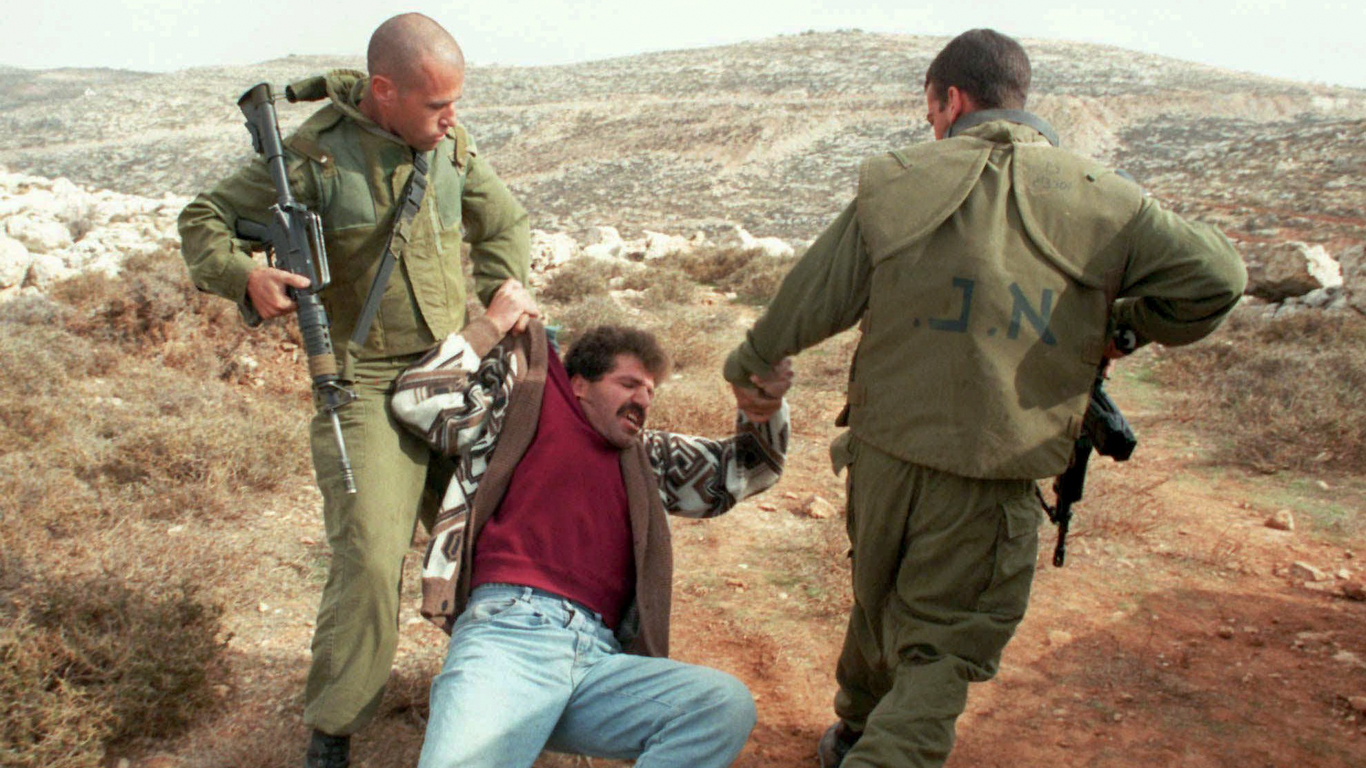 Above photo: Two Israeli soldiers drag a Palestinian to the ground, Nov. 19, 1996 as he protests the bulldozing of his land near the Jewish settlement of Efrat in the West Bank. Jacqueline Arzt | AP.

Learning from the past.

Since 1948, Israel has annexed, occupied, taken, destroyed, built, and renamed everything from individual homes and property to public spaces, to historic monuments. And it has no intention, or reason, to stop.

Palestine has been annexed, occupied, stolen, and Palestinians have been dispossessed, exiled, caged, detained, subjected to an apartheid regime, and killed by the state of Israel for over seven decades. Every few years the world wakes up to protest some aspect of Israeli apartheid, occupation, or a massacre, and then it returns safely to its deep slumber.

Every so often, Israel manages to awaken the angst of the European Union and other international organizations with some announcement or another, a murderous attack on Palestinians, a declaration of annexation or “sovereignty,” and then, as if under the influence of a spell, the angst disappears just as fast as it arose. What usually follows is a long procession of world leaders coming to visit Israel or inviting the Israeli prime minister to their capital to bestow their love and respect for him and the so-called Jewish State.

This time seems to be no different. The Israeli annexation of the Palestinian Jordan River Valley has brought about the world’s displeasure. “A violation of human rights,” says Michelle Bachelet, the UN High Commissioner for Human Rights. We hear that it is a violation of international law and the end of the prospect for peace, as though this is unprecedented and as though it was unexpected. It has long been clear that Israel would annex part of the West Bank, and it was obvious that the Jordan River Valley – the eastern part of the West Bank – was the most likely to be first.

Annexing the entire eastern part of the West Bank means Palestinians will be cut off from the international border with Jordan and will be surrounded by Israel on all sides. Israel wants access to that land, which currently provides West Bank Palestinians some 50 percent of their agricultural products, and wants complete access to the Jordan River.

What It Will Mean

What exactly is the declaration of sovereignty and annexation? No one seems to know for sure. Israeli military experts admit they were not informed as to the details of the move. Israeli politicians are vague and Palestinians, well, no one talked to them, and in any case, people in positions of power don’t care what they think.

Saeb Erikat, who still holds to the title of Palestinian Chief Negotiator, said in an interview with the Israeli television channel Ynet, that “the situation is very severe.” “I have never seen it more severe than I see it now.”

Much of the Israeli press is focused on what the potential Palestinian response may be, and particularly if Israelis should expect violence. Considering the fact that for over seven decades now, Palestinians have been on the receiving end of Israeli violence, it is a cynical thing to ask. According to leaks from a meeting of Israel’s top security chiefs though, the answer to that question is unclear. While the army and Shabak (Israel’s secret police) chiefs claim there will be a violent reaction and that Israelis will see “terrorism” rise, the Mossad chief claims that scenario is unlikely. Either way, Israel never cared much for what Palestinians think and is not concerned with their reactions.

Knowing all too well where his support lies in the United States, Prime Minister Benjamin Netanyahu gave a speech to Christians United for Israel (CUFI). CUFI is amongst the largest pro-Israel groups in the United States. Netanyahu spoke of the annexation of in biblical terms. He spoke of biblical lands and what he called “Israeli sovereignty over Jewish communities.”

He also made the point that these areas are also a part of what he called, “Christian identity,” and part of “Our common civilization.” His speech, like previous comments he’s made on the topic, did not clarify what the annexation will entail.

Israel’s most influential political block, known as the Right Block, wants all of the Palestinian West Bank to be annexed and for Israeli sovereignty to be declared on all of its Jewish settlements. Israel’s political right is made up largely, though not exclusively, of religious Zionists, and settling the West Bank is their number one priority. Annexation will not only give them a political boost, it will make the construction of new Jewish settlements much easier. Whereas today, construction of new Jewish settlements in the West Bank must be approved by the prime minister, Israel’s declaration of sovereignty would make it a matter for local councils.

Learning from the Past

In 1948, the Western part of Jerusalem was conquered by Israeli forces and Palestinian residents were forcibly exiled. Not a single Palestinian was permitted to remain or return and overnight, the city became the capital of Israel. The world stood still then, and it stood still when the eastern part of the city was taken in 1967.

A year later, in 1981, Israel declared its sovereignty over the Syrian Golan Heights. The UN security council passed resolution 497 which states, among other things, that it is once again “Reaffirming that the acquisition of territory by force is inadmissible, in accordance with the United Nations Charter, the principles of international law, and relevant Security Council resolutions.” The Security Council declared that it “Decides that the Israeli decision to impose its laws, jurisdiction, and administration in the occupied Syrian Golan Heights is null and void and without international legal effect. It even “Demands that Israel, the occupying power, should rescind forthwith its decision.” Israel, of course, did not adhere to the UN resolutions, and no action was taken to sanction Israel.

There is no Israel proper

In 1948, the Zionist movement created the state of Israel in Palestine. By year’s end, 78 percent of Palestine had become Israel, and close to one million Palestinians were forcibly exiled. The rest of Palestine became Israel in 1967. Israel has annexed, occupied, taken, destroyed, built, and renamed everything from individual homes and property to public spaces, to historic monuments. And it has no intention, or reason, to stop.

The issue at hand is not a “proper Israel” doing something that is illegal. It is an illegal entity that has planted itself in Palestine continuing its pursuit of illegal activity. The race to create the mythical Greater Israel in Palestine, with the new temple in place of the Al-Aqsa Mosque in its center has been going on in full force. It is a  never-ending project that is well funded, well planned, and very well executed. Only isolation, boycotts sanctions, and divestment have the ability to stop it and to save Palestine.