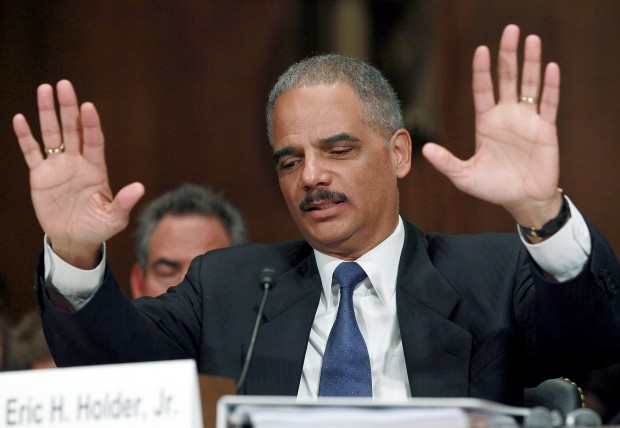 Eric Holder’s tenure as attorney general will be remembered for the failure to prosecute any leading bankers who were responsible for the collapse of the economy. While the SEC negotiated large fines, the DOJ prosecuted none of those who were guilty of crimes that robbed the wealth of tens of millions of Americans. The failure to prosecute bankers was one example of many where corporate power dominated the DOJ on finance, environmental, labor and other issues. This should have been an era of aggressive enforcement of corporate crime, instead corporate criminals were rarely investigated.

It will also be remembered for the mistaken lack of enforcement against war crimes; in particular torture committed by US officials during the Bush administration as well as failing to take any action against lawyers in the Department of Justice and CIA who provided legal cover to torture. Instead of putting up a red light to unauthorized wars and military action, the Holder DOJ provided legal cover the massive drone killings by President Obama (that primarily killed civilians and non-combatants) and the military attack against Libya as well as the current war on ISIS resulting in massive bombings in Syria and Iraq.

A related security-state issue that Holder has not handled well has been the dragnet surveillance being conducted by the NSA. The DOJ should have appointed an independent prosecutor who was not part of the government to investigate the NSA spying program and the role of the White House, CIA, FBI and any other intelligence agencies that may have been involved. The failure to stop this dragnet surveillance program that captures email, text messages, phone chats and telephone calls of the American people has essentially provided legal cover for this violation of the Fourth Amendment to the US Constitution that protects Americans from unreasonable searches without probable cause found by an independent magistrate.

Regarding constitutional rights also undermined during the Holder era was Freedom of Speech and Assembly. The federal government coordinated crackdown of the occupy movement should have been stopped by the Department of Justice. The Holder DOJ should have told the Department of Homeland Security, Federal Protective Service, FBI and any other federal agencies involved as well as local law enforcement agencies, that it was their job to protect the right of protest. The American people have very real grievances against a corrupt economy that is unfair and puts the profits of the wealthiest Americans ahead of the necessities of working Americans. And, they have grievances against a government that is not responsive to the people because it is ruled by money which makes it dysfunctional and incapable of working for the people’s interests. The right of protest is the only remedy the American people have when the government is corrupt and dysfunctional.

Freedom of Speech and Freedom of the Press were also undermined by the dramatic attack by the Obama administration against journalists and whistleblowers. The United States military, security and intelligence agencies have been involved in unprecedented activities that on their face seem to be illegal. We would not have known about them had it not been for whistleblowers like Chelsea Manning and Edward Snowden and journalist Julian Assange of Wikileaks. In fact, Eric Holder’s DOJ inappropriately used the Espionage Act more than any other administration – indeed more than every administration combined. Similarly, attacks on journalists – including searches of offices and threatened prosecution increased under Holder. The right of Americans to know through a free press and citizens of conscience is critical in times of extreme corruption.

The Holder administration also oversaw the development of massive amounts of campaign dollars entering an already corrupt electoral system, through anonymous contributions to non-profit 501 (c)(4) organizations that are not required to report their donors but who are not supposed to be involved in electoral activity. These (c)(4) organizations combined with so-called Super PACs have polluted elections creating plutocratic mirage elections, a façade of democracy. The Citizens Uniteddecision did not authorize anonymous donations; in fact the court said that the requirement of federal election law to report the identity of donors would be a protection against corruption. Attorney General Holder should have appointed an independent prosecutor to investigate electoral activities by both parties. This prosecutor should have interviewed under oath major donors to both parties as well as political operatives like Karl Rove who led the increase in anonymous donations. The DOJ has jurisdiction for criminal enforcement of the federal election laws but utterly failed in using its power.

One area where Eric Holder has made some good decisions and improved policy was in beginning to unravel the war on drugs. He has been critical of mandatory sentencing and his DOJ has put out guidelines that result in decreased use of extreme sentencing. His guidelines for pardons and commutation of sentences, while still too conservative, could result in a thousand or more people receiving a pardon or commutation from President Obama. With mass incarceration that makes the US the largest imprisoner on the planet that is an important step, but too small a step.

On marijuana policy, rather than reacting against the voters in Washington and Colorado who voted overwhelmingly to legalize marijuana, Eric Holder announced a policy that allowed those states to put new laws in place. This was a positive step toward ending the prohibition of marijuana and creating a more sensible marijuana policy. There continue to be US Attorneys around the nation who prosecute medical marijuana providers inappropriately and that is something Holder was less successful at minimizing. And, Holder has not used his power as attorney general to reclassify marijuana under federal law in recognition of its widespread medical use and relative safety.

Finally, Attorney General Holder’s administration has improved the investigation of police abuse, especially police killings. After a great deal of public pressure the DOJ is now investigating cases where the police, on the face of what we know, seem to have abused their power resulting in the death of people, usually people of color. Police abuse in African American and other communities has greatly unraveled respect for the law and turned police into enemies rather than trusted members of the community. Holder has taken some initial steps toward confronting the problem of racist and militarized policing.

We urge President Obama to replace Holder with a public interest not a corporate lawyer; that will put the rule of law before corporate power. This appointment is an opportunity to shut the revolving door between big business and government. We also hope the next attorney general will put rule of law ahead of the security state, prosecute torture and other war crimes, protect privacy from US intelligence agencies and protect Freedom of Speech, Assembly and Press. Finally, we hope to see an attorney general that will confront the war culture that has allowed the president to ignore the constitutional requirement that Congress is responsible for deciding when the US goes to war, not the president; and one who respects international law and requires UN approval before the US attacks another nation.

~ Kevin Zeese serves as the Attorney General on the Justice Branch of the Green Shadow Cabinet.