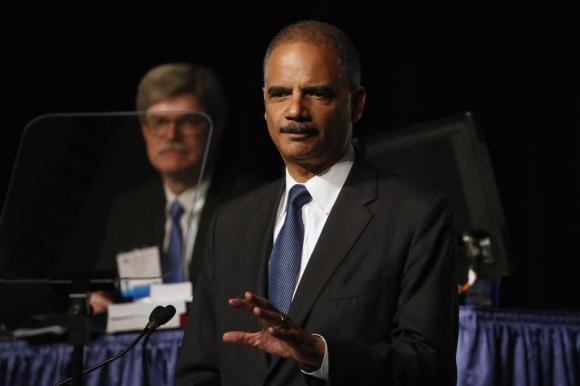 All week the DOJ has been floating trial balloons throughout the media that former Ferguson police officer Darren Wilson will not be brought up on any charges for his slaying of unarmed black teenager Michael Brown – despite 16 eyewitnesses who said that Brown was surrendering with his hands up when he was summarily executed by Wilson; despite the glaring abuse of the grand jury process by St. Louis District Attorney Robert McCullough and despite Michael Brown’s 4th Amendment protections against the excessive use of force.

There is no “very high bar” that needs to be met to establish the case that Wilson intentionally violated Michael’s civil rights as Holder cynically asserted during his recent diatribe at the historic Ebenezer Baptist Church. The Black Attorney General never even mentioned Brown’s right to protection from excessive force or Eric Garner’s protection from being strangled by police, his right to duty of care rather than his slave patrol police assailants’ refusing to administer life saving CPR. Both incidents demonstrate the broader, reckless disregard for people who look like Michael and Eric that is rampant in the US. The echoes of slavery still reverberate through Ferguson and Brooklyn and Cleveland and Oakland and all the other race-toxic communities nationwide.

President Obama and Attorney General Eric Holder see nothing wrong with any of this. If they did, they are empowered to act. Yet the only things they have done proactively about the issues of police brutality and fraudulent grand juries are the establishment of a useless Task Force on 21st Century Policing, headed by – of all people – Charles Ramsey, who as Chief of Police in Washington, DC unleashed a police onslaught against unarmed civilian demonstrators who were practicing their constitutional right of peaceful assembly that cost the District millions in damages awarded in a class action suit. On top of that, they now toss us the cynical bone of hollow promises that they will add investigating the Ferguson police department to the mountain of investigations that they have already promised into the deaths of Trayvon Martin, Eric Garner, Tamir Rice and so on ad nauseam.

“The echoes of slavery still reverberate through Ferguson and Brooklyn and Cleveland and Oakland and all the other race-toxic communities nationwide.”

And so today, in advance of the Justice Department’s official announcement that there will be no charges brought against Darren Wilson we must declare our victory such as it is. Unlike the investigation into George Zimmerman’s hunting Travyon Martin for sport – February 26, 2015 will mark the 3rd year with still no DOJ ruling – the effort of common American citizens under the banner of the Hands Up Coalition DC (consisting of nearly 40 organizations) has forced the Department of Justice to hastily spew its no-finding without the usual delaying tactic of waiting years before slipping some half-measure to the press out the back door late on a Friday afternoon.

This time – and only because for three months we have stood sentry at the doors of the DOJ and in the streets across the country – we smoked them out. They had to reach a decision in the Brown case. But this free pass that is about to be granted Darren Wilson is a bitter rebuke to Michael Brown’s family given Mr. Holder’s solemn public promise to stand with them. Holder’s breach of promise to them stands alongside the oath he violates every day that passes without his prosecuting the highest public officials who designed, implemented and oversee a systemic regime of torture. The brutalizing of African Americans and the torture of prisoners are one and the same.

Sadly, the families of John Crawford III, Tamir Rice, Eric Garner and all the other victims around the country must let go of any illusions that DOJ is in their corner.

“St. Louis District Attorney Robert McCullough stacked the jury, he manipulated witnesses – in some cases with people he knew to be lying. He allowed no adversarial cross examination and then presented the findings as though they were arrived at justly,” said Kymone Freeman, Program Director for We Act Radio. “He stalled for three full months – while decent people were getting beaten, shot, pepper sprayed, sound bombed and tear gassed – when he could have accomplished all he had to do in a single day’s work by acknowledging that 16 people said Michael Brown’s hands were up when he was murdered. It was not up to Bob McCullough to decide guilt or innocence in this case. It was up to him to let a jury decide. But that would have included Michael Brown’s peers and McCullough couldn’t risk exposing one of his goons to a fair trial.”

A recent New York Times article did not even mention the gross misuse of the Grand Jury system by St. Louis DA McCullough.

“We smoked them out. They had to reach a decision in the Brown case.”

The Department of Justice could have intervened for any one of those egregious acts, but did not. “The Obama administration has innocent American blood on its hands. The entire process is gangrenous. Despite their promises to Michael Brown’s family, the Ferguson community and the country, neither the president nor the attorney general have the moral courage to do what is right,” said Eugene Puryear of #DC Ferguson and ANSWER Coalition National Organizer.

After holding their hands and looking Michael Brown’s grieving parents in the eye while assuring them that the US Department of Justice would stand with the people of Ferguson, let AG Eric Holder stand once again in front of cameras, in Ferguson, with Michael Brown’s parents beside him and tell the country that his Department of Justice will not indict Darren Wilson. Give Eric Holder the photo op of telling Michael’s parents to their face that Darren Wilson’s assassination of their son was a “good kill” protected by the US Constitution. Let Mr. Holder tell the Ferguson community that the DOJ is only investigating how it can improve the vile, nearly all-white Ferguson police force. Let him face the righteous wrath of all those betrayed by the Obama administration’s complicity in the murder of Michael Brown.

Going forward it is now time to consider new tactics and strategies.

The system that once forbade Dr. Martin Luther King, Jr. and his compatriots from crossing the Edmund Pettus Bridge has morphed, expanded and grown so sophisticated that it now accommodates “peaceful demonstrations” with police escorting protesters from die-ins to “shutting shit down.” This isn’t respecting our constitutional right to petition the government for redress of grievance. No. This is appeasement and patronizing.

I don’t recall the history lessons about Martin, Biko, Garvey and Nkrumah holding die-ins in the street. Or of Malcolm reveling afterwards about standing in front of the Department of Justice month after month while the folks inside went about business as usual and sided with yet another white cop who had blatantly murdered an unarmed black civilian. And I must have missed the section on Fidel or Che settling for a special Presidential U.S. Commission to look into whether or not there should have been changes made in the way the government did business in Cuba. Nope. The current post-Ferguson uprisings are most certainly NOT our grandparents’ civil rights movement—or comparable to any other revolutionary movement. Not by a long shot.

“Neither the president nor the attorney general have the moral courage to do what is right.”

Yet to the casual observer the guys with the machine guns and helmets and personnel carriers and tasers at their disposal scored a victory. They had the better team, the better infrastructure, messaging and message distribution with eager partners in the legacy media to drive it home. To be clear – the president is the epitome of the guy with the guns, as LBJ demonstrated in Selma when he dispatched the National Guard. Were the president equal to his rhetoric he would stand his ground. He has both the authority and capacity. Yet he and his attorney general have gone missing on this one, while newly-wed Darren Wilson enjoys the privacy of his sanctuary with impunity while his supporters bloat his bank account.

The police, the police unions and the highest officials in government are laughing at our gullibility, our congeniality, our embarrassing willingness to criticize “brutal police” while those same police facilitate our blocking the streets in downtown America – in areas not even remotely connected to the decision makers – while those whose support we need are sitting in the clogged traffic we created, maybe on their way to pick up their children from daycare or to see their dying mother and are chafing at the theater being played out at their expense in the streets.

We don’t see any businesses doing that as a way to attract and retain customers.

But a discerning eye sees that in the long arc of Justice we have scored victories, too. By participating in shut downs and marches and vigils and workshops and strategic conversations we have enjoyed a sense of power, the healing of fellowship and the kindling of a new belief that the promised land is within reach. And we have learned some valuable lessons: We now know what to expect from the Obama administration – nothing. We now know what to expect from the president’s commission on policing – nothing. We now know that the police have been instructed to tolerate our fitful outbursts as a way for us to blow off steam, to diffuse the energy that builds every time the slave patrols collect another bounty. We have by now seen the only real policy the government has to offer – waiting us out until the storm blows over. That’s it.

“If there is no justice for police-murdered civilians there can be no peace.”

Both sides can only claim partial victories. But riding out the storm is just as ineffective for them as our docile, symbolic protesting is for us. And with every innocent fallen black citizen the platitudes served up by the administration about a brighter tomorrow ring more hollow still. When history presented Eric Holder his Rosa Parks moment, he retreated to the back of the bus. And when righteousness tapped Barack Obama on the shoulder with his Lester Maddox moment, he sidled up to the white folks with the ax handles. Mercifully, Eric Holder is about to ride into the sunset of mediocrity where untold wealth via obscene honoraria, book deals and other million dollar opportunities await. May his opulent future be plagued with remorse and shame.

Unlike the President’s lame assertion that torture and racism occurred in the past and we need to move forward, may we remind ourselves that ALL punishable crimes get committed in the past and adjudicated in the present. No one can be convicted for a crime they may commit, only those they have committed. If there is no justice for police-murdered civilians there can be no peace. And if there is no justice for war criminals – beginning with the President and applied equally throughout the chain of command – there can be no peace.

This is next to war. When our vaunted past revolutionary leaders confronted their oppressors they didn’t shrug, “Give me liberty, or give me the remote.”

Then why do we?