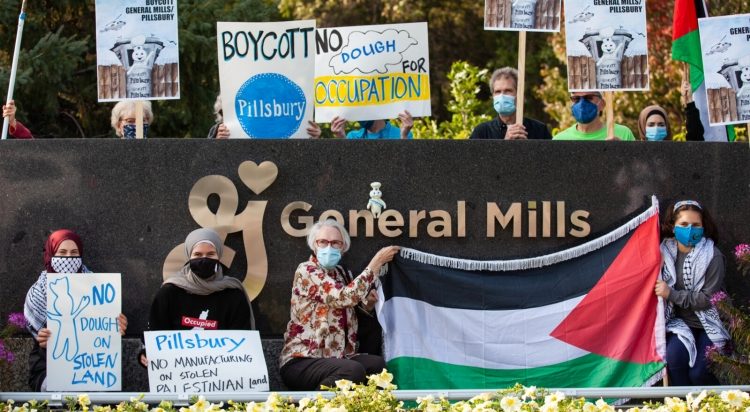 AFSC and partners took our campaign to boycott Pillsbury to the corporation’s boardroom.

Earlier this fall, we launched our No Dough for the Occupation campaign to pressure General Mills to stop producing Pillsbury products in illegal settlements in the occupied West Bank. Last month, our campaign coalition—which includes the Palestinian Boycott National Committee, Jewish Voice for Peace, and others—held its first day of action to coincide with General Mills’  annual shareholder meeting.

The day before the meeting, on the United Nations International Day of Peace, protesters gathered in front of General Mills’ headquarters in Minneapolis, chanting “No Dough for the Occupation,” “From Minneapolis to Palestine, police killings are a crime,” and presenting our campaign demands—generating local and national media coverage. The rally included American Muslims for Palestine Twin Cities, Jewish Voice for Peace Twin Cities, the Minnesota Anti War Committee, Veterans for Peace Chapter 27, Women Against Military Madness, and staff of AFSC’s Twin Cities Program.

The next day, we joined the company’s annual meeting online as shareholders in General Mills. We asked the company how it plans to live up to its own human rights policy, given its involvement in Israel’s illegal settlement industry, which amounts to a war crime. General Mills ignored our questions during the live event, despite answering 15 other questions on a variety of other topics. A few days later, the company posted on its website an answer to our question—unsurprisingly, it was very disappointing and failed to respond to our concerns.

First and foremost, our questions were rephrased to omit any reference to the occupation or the illegality of General Mills’ involvement. While we pointed out that the Pillsbury factory is located “in an illegal settlement in the occupied Palestinian territory” on “land that was confiscated illegally from its rightful Palestinian owners,” General Mills reported that our question was about “operating in disputed areas of Israel.”

To be clear: There is nothing “disputed” about this area. There is broad consensus in the international community that Israel’s colonization and annexation of this land is a blatant violation of international law. The only ones disputing this fact are the Israeli and U.S. governments, who are directly responsible for this violation.

Secondly, in its answer, General Mills evaded our question by ignoring our concerns. The company acknowledged that it “uses natural resources, in particular water and land, for business purposes.” However, it failed to acknowledge that this business activity is illegal under international law and that it harms Palestinian by denying them access to their land and water. The Pillsbury factory is exploiting these Palestinian natural resources for the benefit of the Israeli economy—without contributing a dime to the Palestinian economy.

Instead of addressing our concerns, the company repeated talking points it has used before, saying that half of the factory workers are Palestinian, and that “every employee has full social benefits without prejudice to race, religion or nationality.” Of course, providing jobs is a good thing. But Palestinians who work in Israel or its illegal settlements often cannot realize their human rights at work, primarily the right to unionize. Speaking of unions, the Palestinian General Federation of Trade Unions is one of the signatories to the Palestinian 2005 call to use boycott, divestment, and sanctions (BDS) tools to end Israel’s illegal occupation.

General Mills’ point about workers also does not address the illegality of its operations. If it really cared about its workers, the company could either ask Israeli government to allow them to work within Israel’s internationally recognized borders or move production to an area under the control of the Palestinian Authority. Without exception, General Mills—and any company—that directly contributes to the settlement economy is perpetuating a system of control and expropriation in denial of Palestinians’ basic rights.

We will continue mounting pressure on General Mills and have plans to escalate this campaign. And I hope you will join us in this effort!

And make your actions public so the company hears about them!

To stay up to date and learn more about campaign, visit boycottpillsbury.org. And hear more about our efforts in this Electronic Intifada podcast.