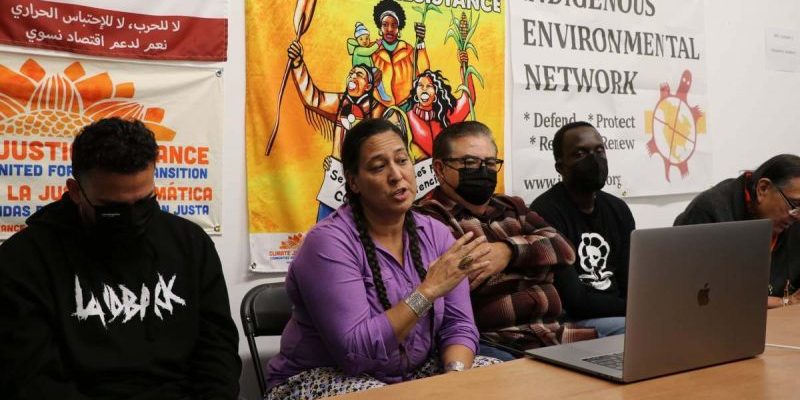 Holding Their Feet To The Fire

Above Photo: It Takes Roots gathering in Glasgow, Scotland ahead of the Global Day for Climate Justice. (Hendrik Voss. Climate Justice Alliance Facebook)

Protests and actions by civil society organizations are stepping up at the COP26 conference as the event enters its second week in Glasgow, Scotland. Thousands of climate activists from all over the world have arrived demanding genuine change.

Young people and others, both inside and outside of the United Nations climate talks, are telling world leaders to hurry up and get it done, that concrete measures to avoid catastrophic warming can’t wait.

On Friday, during a news conference shared via Zoom organized by It Takes Roots, several Indigenous and people of color leaders attending COP26 expressed impatience with the lack of substantive action by world leaders.

“I’d like to report that the nation, state leaders are on track with keeping the world’s temperature down to 1.5 Celsius but that’s not the case,” said Tom Goldtooth, executive director of the Indigenous Environmental Network.

Goldtooth, Dine’ and Dakota ancestry, characterized the U.N.’s “Race to Zero” campaign as a false solution to global warming. The race to zero or net-zero drive refers to a scheme for business and industry to include market-based measures in order to achieve zero carbon emissions. Many environmentalists complain that this strategy fails to encourage countries and companies from reducing emissions at the source.

Ozawa Bineshi Albert, co-executive director of Climate Justice Alliance, was critical of COP26 measures that limited the number of Indigenous peoples, especially from the global south, from attending the conference. Numbers of Indigenous attendees seemed far smaller than during past COP meetings, according to Albert.

“The restrictions around COVID-19 and people having access to vaccines has really challenged access for Indigenous peoples here,” said Albert, Anishinaabe and Yuchi. “Despite that, we are here, building relationships and creating strategies to support each other.”

Goldtooth added, “We intend to push our rights and agenda as Indigenous peoples here in the hallways of the conference and the streets of Glasgow.”

Ashley Lashley, a 22-year-old from Barbados who is on her country’s climate negotiation team in Glasgow, thought about how to communicate the need for urgency during a session on carbon trading. As she listened to other delegates debate the intricate and intractable topic that has baffled negotiators for more than six years, a phrase popped into her head: ‘”blah-blah-blah.”

That’s the expression prominent teenage climate activist Greta Thunberg has started repeating to express her thoughts on the pace of government actions to curb global warming. The Thunberg-inspired Fridays for Future movement held a demonstration outside the conference venue to pressure the negotiators inside, drawing tens of thousands of participants.

And inside, the session Lashley attended droned on. She worries her fellow negotiators too easily become bogged down in minutiae and lose sight of the big picture: keeping emissions from exceeding 1.5 degrees Celsius (2.7 degrees Fahrenheit), which could wipe out some island nations and other vulnerable spots.

“Can’t you guys just wrap it up,” Lashley, one of the few young people sitting in on negotiations, recalled thinking on Friday.

Indigenous communities are among the most threatened by climate crisis – yet they are locked out of #COP26. Listen to Ruth Miller, Eriel Tchekwie, & Tom Goldtooth on what’s at stake. @Native_Mvmt@Indigenous_ca @IENearth pic.twitter.com/nsAeuemeVG

Umuhoza Grace Ineza, 25, a negotiator for Rwanda, said she watches some sessions crawling along and hears other negotiators say “Ooh, let’s try this way, that way, and then we can come up with a decision next session.” Ineza says she wants to ask them if they understand how urgent limiting climate change is for the next generation.

“In my mind, it’s like do these people have children?” she said.

University of Michigan graduate student observers AJ Convertino and Evan Gonzalez said watching the sessions on the inside made them both more impatient but also more optimistic because they see the right things being said and done, if still way too slowly.

Friday was the day the U.N. conference said it was dedicated to youth.

But the schedule didn’t reflect that, at times: a news conference where officials talked about youth had a panel with no members under 30, and the lunchtime events featured former U.S. Vice President Al Gore, 73, and 77-year-old John Kerry, the U.S. climate envoy.

“When I arrived at COP26, I could only see white middle-aged men in suits,” Magali Cho Lin Wing, 17, a member of the UNICEF U.K. Youth Advisory Board, said at a press event. “And I thought, ‘Hold on, is this a climate conference or some corporate event? Is this what you came for? To swap business cards?’”

And except on rare occasions, young people say they are not being listened to.

“It’s our future. Our future is being negotiated, and we don’t have a seat at the table,” said 20-year-old Boston College student Julia Horchos, who is inside the conference, but hasn’t gotten into negotiating sessions.

We are here now gathering in Glasgow with frontline leaders from all over the U.S. and territories, gathering to bring the voices of our communities resisting fossil fuels and #ClimateCrisis, to mobilize for #ClimateJustice at #COP26. #ItTakesRoots #NoNetZero #KeepItInTheGround pic.twitter.com/wMQcDIPuJk

Still, they know it’s important to be at least near the room where it all happens.

Outside the negotiations, the worry about the future was the same, but the way it was expressed was different.

During the Fridays for Future demonstration in Glasgow’s Kelvingrove Park, mostly young activists carried banners with slogans such as “I have to clear up my mess, why don’t you clear up yours?” and “Stop climate crimes.”

Speaking at the Fridays rally outside the conference venue, Greta Thunberg branded the U.N. climate talks in Glasgow so far “a failure,” accusing leaders of actively creating loopholes in the rules and giving misleading pictures of their countries’ emissions.

“World leaders are obviously scared of the truth, yet no matter how hard they try, they cannot escape it,” the 18-year-old Swedish activist said.

The Fridays For Future protest was part of a series of demonstrations being staged around the world Friday and Saturday, to coincide with the talks.

Some at the rally accused negotiators of “greenwashing” their country’s failure to curb greenhouse gas emissions by trumpeting policies that sound good but won’t do enough to prevent dangerous temperature rises in the coming decades.

Brianna Fruean, a 23-year-old activist who grew up in Samoa, a low-lying Pacific island nation that is particularly vulnerable to rising sea levels and cyclones, said: “My biggest fear is losing my country.”