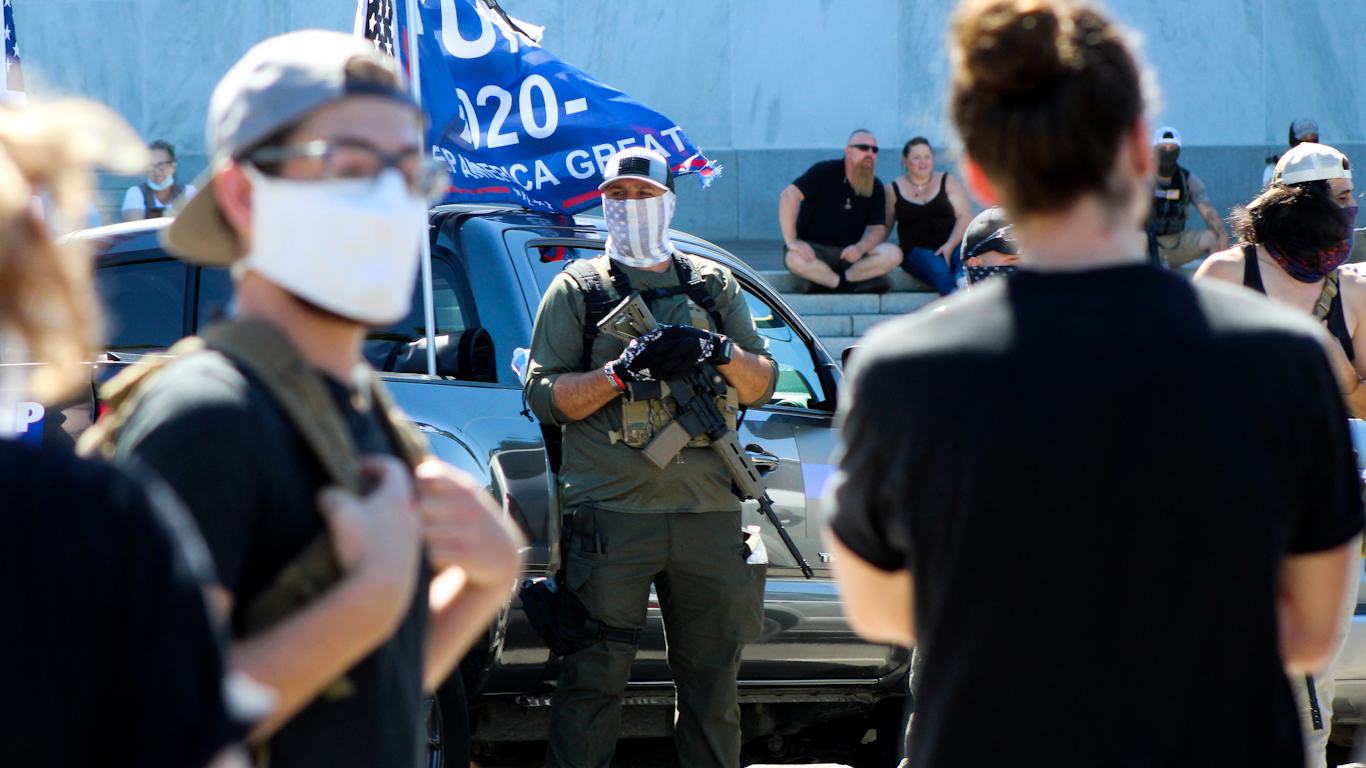 Above photo: A right-wing protester armed with an AR-15 style rifle looks at Black Lives Matter counter-protesters who are across the street in front of the Oregon State Capitol in Salem, Ore, Sept. 7, 2020. Andrew Selsky | AP.

A new threat assessment by the New Jersey Office of Homeland Security and Preparedness warns that extremists from both sides of the political spectrum could engage in violence and civil unrest well into 2021 as a result of the upcoming presidential election.

In the lead up to the 2020 presidential election, potential civil unrest and worse has been predicted by multiple governmental agencies and assorted federal outfits, including the New Jersey Office of Homeland Security and Preparedness. Last week the organization published a “supplemental threat assessment” on the upcoming electoral contest subtitled “The Convergence of COVID-19, Nationwide Civil Unrest, and the Upcoming Presidential Election.”

Using COVID-19 as a backdrop, the 13-page report identifies the pandemic as the “driving factor” behind “public health fears, economic instability, political dissent, and cultural turmoil,” that will persist until 2021.

It is the first publically-released evaluation of concerns federal law enforcement officials are said to be harboring over the election and comes on the heels of a recently leaked memo from DHS, which echoed many of the same narratives developed in the document issued by DHS’ satellite regional New Jersey office, including the leading role of White Supremacist groups.

In August, the FBI distributed a bulletin to police departments across the country warning about domestic extremists “across the ideological spectrum,” who were likely to “continue to plot against government and election-related targets to express their diverse grievances involving government policies and actions.” More significantly, the Bureau’s missive directed police to prepare “to act prior to a possible democratic presidential administration,” due to fears that “stricter firearm regulations would be enacted quickly thereafter.”

In all three official communications, the specter of domestic violence brought on by election results plays a paramount role and, by and large, centers on two opposing factions of potential domestic extremists who are projected to clash along the fringes of their respective anti-establishment, yet strangely partisan, divides. Only the New Jersey Office of Homeland Security’s report provides somewhat greater detail about who these factions are and the specific scenarios they are expecting to confront in less than one month’s time.

According to the document, the COVID-19 pandemic protocols will necessarily “alter” the electoral process and set the stage for “disputes or delayed election results,” which in turn will unleash the “primarily anarchist, anti-government, and racially motivated” mobs of disaffected Americans on either side of the political spectrum who will try to occupy election offices and use tactics similar to those employed by certain groups at capitol buildings spurred by the lockdowns – a reference to right-wing demonstrations like the one that took place in Lansing, Michigan last week.

In addition to the prospect of violence in the streets, the report also highlights the threat posed by “disinformation” surrounding the efforts to develop a COVID-19 vaccine cautioning against the “demonization of pharmaceutical companies” and “false narratives to incite supporters.” This particular plot line is also tied in the report to state actors like China, Russia and Iran, whose supposed “global [COVID-19] disinformation efforts targeting the United States” will play a large part in the execution of these threats.

The bulk of the document, however, focuses on the interplay between the left and right-wing extremists and the state, asserting that while “Antifa” and other left-leaning groups will resort to damaging public property, “including arson, looting, and general vandalism,” the right-wing groups will, instead, hone in on opposing the left-wingers themselves and lead to violent street clashes. These points are noteworthy in light of new information surrounding the individual responsible for sparking the arson and the looting in Minneapolis over the killing of George Floyd, dubbed Umbrella Man.

In the anger that erupted after the brutal suffocation of George Floyd, whose neck was crushed under the knee of a Minnesota police officer, many suspected that the black-clad individual caught on video vandalizing and setting fire to an Autozone retail establishment was actually a police officer playing the role of saboteur as the protests were just getting underway. But a July report from ABC revealed Umbrella Man’s true identity and his links to a powerful White Supremacist prison gang network that dates back to the early 1950s.

The unnamed 32-year old suspect was found to be a member of the Aryan Cowboys, a “prison gang out of Minnesota and Kentucky,” which is but one in a national network of White Supremacist prison gangs controlled from the top by the Aryan Brotherhood (AB), also known as The Brand, Alice Baker, AB or One-Two. One of AB’s top former lieutenants got his start as a criminal in Minnesota, himself, and claims to be the originator of the entire White Supremacist narrative for member-retention purposes.

John Greschner, now a police informant, takes all the credit for developing the White Supremacy angle back in the 1970s when he was doing time with AB’s founder, Barry “Baron” Mills.

“Look, man,” Greschner told Mills, “we gotta have some deeper catalyst that pulls people in and holds them together… If you give them something deeper they can feel connected to, maybe some northern European religion or whatever, and some racial thing and all that, well, they’ll start to feel like they’re down with a greater cause.”

According to a leaked DHS memo, “white supremacist extremists – who increasingly are networking with likeminded persons abroad – will pose the most persistent and lethal threat.” The FBI’s bulletin for the country’s police departments piled on with its own examples, citing a case from last year regarding an unnamed extremist who ostensibly planned to start a race war with a homemade bomb. The FBI bulletin stated that the Ohio-based extremist “an intent for his group of followers to be operationally ready for the 2024 election based on a belief that the President would win re-election in 2020.”

Jared Maples, director of the New Jersey Office of Homeland Security and Preparedness, says that conditions surrounding the upcoming election amount to a “witch’s brew” we haven’t seen in centuries, if ever. The brew, itself, seems to be largely concocted by the multiple agencies tasked with doing something about the threats. But, so far, little has been done in the way of preparing law enforcement for the intensified admonitions.

A former FBI agent and counterterrorism expert decried the Bureau’s bulletin, saying that any  “young police officer trying to protect his community and reading this report” would have be able to take nothing out of it except fear.