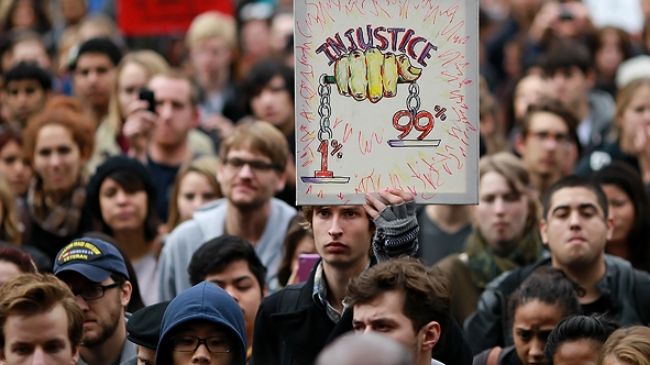 New documents show that the US Department of Homeland Security (DHS) spied on peaceful Occupy Wall Street (OWS) protesters during the height of the anti-capitalist movement in the country.

The documents released by the Partnership for Civil Justice Fund (PCJF) on Tuesday revealed that the DHS routinely spied on peaceful First Amendment activities and required daily briefing on the extent of media attention being given to OWS activities.

The PCJF obtained the 252 pages of documents under a Freedom of Information Act (FOIA) filing with the DHS, the sprawling Federal agency ostensibly created to combat terrorism after the September 11 attacks.

In November 2011, the group launched a campaign to unearth public records that would show whether the federal government was spying on OWS pretests across the nation. Federal Bureau of Investigation (FBI) records obtained by the group in December showed that the bureau investigated the Occupy movement as a potential “domestic terrorism” threat.

One document said there was “coordination and intelligence monitoring by the DHS, the FBI, the NYPD (New York Police Department) and other law enforcement agencies of ‘Occupy-type’ protests.”

Many of the new documents relate to the Federal Protective Service, a DHS division charged with providing security for federal buildings, including courthouses.

It was the protective service “Threat Management Division” that asked its regional intelligence analysts on October 21, 2011, to report on “peaceful activist demonstrations,” along with “domestic terrorist acts,” the documents show.

The Federal Protective Service has long been a source of concern for civil liberties advocates. In response to a March 2006 protective service bulletin, Homeland Security’s own Office of Civil Rights and Civil Liberties has concluded that the division “failed to differentiate adequately between civil activist and violent extremist organizations.”

“Taken together, the two sets of documents paint a disturbing picture of federal law enforcement agencies using their vast power in a systematic effort to surveil and disrupt peaceful demonstrations,” Mara Verheyden-Hilliard, the executive director of the PCJF, said in a statement.

“The federal agencies’ actions were not because Occupy represented a ‘terrorist threat’ or a ‘criminal threat,’ but rather because it posed a significant grassroots political challenge to the status quo,” the statement added.

Carl Messineo, the legal director of the PCJF, said in a statement that his group believes the latest documents represent “a fraction of what the government possesses.”

The Occupy Wall Street movement began when a group of demonstrators gathered in New York’s financial district on September 17, 2011 to protest against corruption, the unjust distribution of wealth in the country, and the excessive influence of big corporations on US policies.