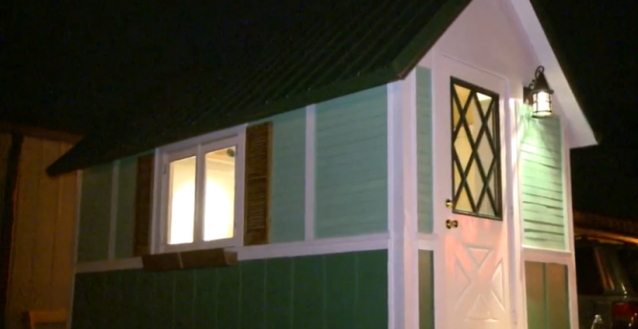 Homeless Couple Gets A Home On Christmas Eve

Above: Tiny House build by Occupy Madison for the homeless, CREDIT: NBC 15 WMTV

For many couples, the thought of living together in a 96-square-foot house sounds awful. But for Chris Derrick and Betty Ybarra, it’s a Christmas miracle.

That’s because Derrick and Ybarra have spent the better part of a year braving Madison, Wisconsin’s often-harsh climate without a roof over their head.

They’ll spend this Christmas in their own home, thanks to more than 50 volunteers with Occupy Madison, a local Wisconsin version of the original Occupy Wall Street group in New York. The group, including Derrick and Ybarra, spent the past year on an innovative and audacious plan to fight inequality in the state’s capital: build tiny homes for the homeless.

In a city where an average home for sale costs nearly $300,000, many low-income individuals simply can’t afford somewhere to live.

Indeed, in January of this year, a citywide count found 831 homeless people living in Madison, a 47 percent increase in the past 3 years. And it’s not just adults; 110 families with children were identified as well.

The “Tiny House Project” began the same month. The plan was for volunteers to build micro-homes that still include living necessities like a bed, insulation, and a toilet. The homes are heated via propane and include a pole-mounted solar panel to power the house’s light. The total cost: $3,000, paid for by private donations.

Rather than building the homes on a particular lot of land — and thus adding another expense — the houses are mounted on trailers which can be legally parked on the street, as long as they’re moved every 48 hours. Parking on the street may not even be necessary after Occupy organizers successfully convinced the Madison Common Council recently to change the city’s zoning laws so the homes could be parked on private property with permission.

As Occupy Madison continues to build more tiny houses, it hopes to eventually buy a plot of land and create a tiny village with as many as 30 homes.

“It’s not just a shelter, it’s a commitment to a lifestyle,” Brenda Konkel, who heads a tenants’ rights non-profit in Madison, said during the zoning meeting, according to The Capital Times. “It’s a co-op mixed with Habitat for Humanity mixed with eco-village as the long-term goal.”

On Tuesday, Christmas Eve, Ybarra and Derrick moved into their new home. Ybarra said the moment was “exciting,” telling NBC 15 that she’d never owned her own home before, much less one she helped build. Occupy Madison posted this video to mark the occasion.

Though a common critique of the Occupy movement was that its goals were nebulous and unspecific, it has effected a significant amount of change on a local level. This includes savingmany people’s homes from foreclosure and buying up (and then forgiving) $15 million of consumer debt for pennies on the dollar.