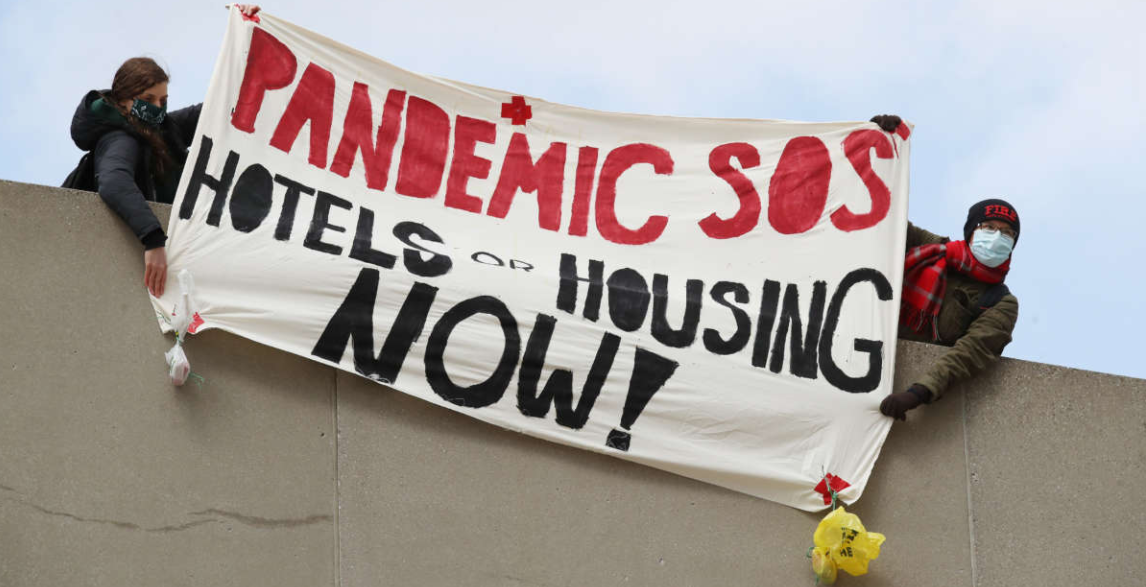 Above photo: Advocates for the homeless and frontline health care workers stage a socially distanced protest aimed at speeding up what they say is Toronto’s slow approach to managing COVID-19 in shelters, in Toronto, Canada, on April 15, 2020. Steve Russell/Toronto Star via Getty Images.

In Canada’s homeless encampments, two faces of state brutality are on display. One is the “organized abandonment” that has relegated hundreds of thousands across Canada to homelessness (at twice the rate as in the United States). The other is the “organized violence” that evicts homeless people from encampments erected in the shadow of the state’s malign neglect.

In Toronto, Canada’s largest and most unequal city, frontline workers estimate there are currently 1,000 to 2,000 people sleeping in dozens of encampments outdoors — several times more than the 400 acknowledged by city officials. Against the advice of the U.S. Centers for Disease Control and Prevention and the former UN Special Rapporteur on Housing, the municipality has been razing encampments in the name of “safety” and “health,” relocating people to institutional spaces that are far from healthy or safe.

“Nobody cares about us,” said Moss Park encampment resident Kassie. “It’s like we’re a bedbug in their building that they just want to exterminate.”

Even before the pandemic, Toronto’s dangerously overcrowded shelter system was a “petri dish” for disease transmission, to quote long-time street nurse Cathy Crowe. A study published recently in the Canadian Medical Association Journal found COVID infection rates of 41.7 percent in one large Toronto shelter. Mobile testing in the encampments, in contrast, has detected zero cases among residents so far, according to Indigenous frontline health worker Les Harper.

In the city’s “shelter-hotels” — hotels in nothing but name — people report being uprooted from their support networks, required to room with strangers, and surprised with intrusive “wellness checks” while in the shower, naked or asleep at night, according to frontline workers. Since they are permitted to bring only two bags of possessions, many leave poorer than when they arrived.

Meanwhile, in temporary respites like the so-called Better Living Centre, physical distancing is achieved by caging people in transparent glass boxes, while the lights have been left on for 24 hours a day. In other contexts — denouncing China’s subjection of Canadian prisoners to sleep deprivation through incessant lighting, for instance — such conditions have been characterized not as “better living” but torture.

The imposition of such “solutions” to homelessness — without consulting homeless people themselves — exemplifies the state’s “violent benevolence,” in which “instrumental violence [is] narrated as gentle or non-violent, even when it’s violent and is experienced as oppressive,” in the words of anti-poverty scholar-activist A. J. Withers and critical social work academic Chris Chapman.

Even in the frigid temperatures, many houseless people are deciding to sleep outside instead — or are forced to, by the persistent shelter unavailability. Contrary to the city’s claims of increased capacity during the pandemic, there are 1,158 fewer shelter spaces available this winter in Toronto as compared to last. Sixty-one percent of requests received by the city for shelter are turned away.

“Many of [the people sleeping in encampments] know people who have died outside in the winter,” social worker Kyrsten Howat attested to Toronto City Council. “I am asking you to consider how bad the system must be for them to prefer to take that risk than to deal with the inadequate shelter system.”

In apparent dissociation from this reality, city press releases applaud the “extraordinary steps taken to help and protect people experiencing homelessness during COVID-19.” The government presents a menu of bad options, then expects gratitude for the crumbs dispensed.

As its press releases proclaim, Toronto “consistently places at the top of international rankings due to investments championed by its government, residents and businesses.” Left unmentioned is that these “international rankings” include being one of the most unaffordable cities in the world, having one of the largest “super-rich wealth gaps” in the world and being the “child poverty capital” of a country that has one of the highest child poverty rates in the Organisation for Economic Co-operation and Development.

Toronto spends almost five times more on policing than on shelter and housing. At the current legislated minimum wage, a worker would have to work 14 hours a day, seven days a week, to affordably rent an apartment in the city. The waiting list for social housing is seven to ten years long.

All levels of Canadian government have stripped funding for vital social goods like housing to the bone, while fattening the institutions of violent social control such as the military and police. Even money ostensibly allocated for social welfare has in some cases turned out to be yet more police enrichment by another route: For example, 99 percent of the Ontario government’s $200 million grant for “community safety and well-being” ended up back in police coffers.

In the “disaster opportunism” of the pandemic, the provincial government has further extended its own emergency powers for up to two years, while measures protecting renters from eviction have been ripped away. In fact, evictions have been further facilitated with the new, perversely named “Protecting Tenants and Strengthening Community Housing Act,” known as the “Evictions Act” by those on the receiving end of its “protection.” While corporate landlords have continued to reap large profit margins, impoverished tenants have been forced to beg for their homes in mass online eviction hearings: 7,000 in November alone.

These eviction hearings are a “pipeline to encampments,” observes lawyer Dania Majid of the Advocacy Centre for Tenants Ontario. In Toronto, 600 new people have been entering the shelter system every month, according to the city’s own data — which has a pattern of understating the numbers to make the problem “disappear,” if only on paper.

Having jettisoned the possibility of ensuring genuinely affordable housing and a livable wage, the state directs its resources towards penalizing the survival strategies of the dispossessed.

The Ontario Superior Court has refused to suspend Toronto by-laws prohibiting people from sleeping in parks, maintaining that, “parks are public resources, intended to be available and used by everyone” (except, apparently, by homeless people for activities necessary for life). As Brendan Jowett, one of the lawyers who brought the case, argues: “What was really at stake was not whether people can use public parks for recreation, but whether people can use public parks without being reminded of the city’s social ills.”

Even efforts to mitigate the state’s public cruelty with private generosity have been disciplined; carpenter Khaleel Seivwright was threatened by the city with legal action for constructing “tiny shelters” for people sleeping outside.

With the expansion of pandemic policing powers, the burden of intensified harassment has been borne primarily by homeless people, Indigenous people and Black people — the same shoulders on which the greatest share of police brutality has long been inflicted. In recent years, Toronto cops have been caught targeting homeless people with hefty fines for fabricated offences, in order to “increase their numbers”; after forfeiting a few days’ pay, these officers have been permitted back out onto the beat, making $100,000+ per year.

The state traps homeless people in an impossible position. They are deprived of housing, but prohibited from sleeping in public space. They are denied public washroom and shower facilities, but punished for performing necessary bodily functions outdoors.

A fundamental feature of the rule of law is that the law must be possible to obey. Instead of the “rule of law,” homeless people are subjected to the “law of rule”: crushed under the force of law’s punishment but excluded from its protection.

Housing is a human right under international law. Yet in Canadian (as in U.S.) courts, this basic floor of human entitlement is treated as an unattainable ceiling. Canadian judges refuse to recognize housing as part of the constitutional right to “life, liberty, and security of the person,” or to include homelessness as a prohibited ground of discrimination because it is not an “immutable” characteristic. Strangely, the fact that governments could change the situation is used to let them off the hook for actually changing the situation.

Other rights, such as the protection against “unreasonable search and seizure,” have in effect been treated as void for people lacking control over private property. In encampment evictions, city employees have slashed tents open with knives — reportedly sometimes while those dwelling in them are still inside, according to frontline worker Greg Cook — and confiscated and destroyed people’s belongings, including medication.

“Most, if not all, of the rights and freedoms set out in the [Canadian Charter of Rights and Freedoms] pre-suppose a person who has moved beyond the basic struggle for existence,” as legal academic Martha Jackman points out. “The Charter accords rights which can only be fully enjoyed by people who are fed, are clothed, are sheltered, have access to necessary health care, to education, and to a minimum level of income.”

This illustrates the paradox of human rights identified by philosopher Hannah Arendt: the human stripped of everything but their humanity effectively has no human rights. Arendt was referring specifically to the condition of statelessness. The fact that being without property resembles being without a state is a sign of how deeply citizenship has been capitalized and commodified.

In this neoliberal paradigm, Toronto refers to its shelter request response system as an exercise in “customer service.” Never mind that many of the “customers” are repeatedly told there is no room at the inn.

Capitalism as a Public Health Crisis

Instead of serving as the much-hoped-for portal to a more just future, the pandemic has been a time-warp, remolding old inequalities to fit the new reality.

“Investment immigrants” are busy buying up multiple citizenships, while the poor are being shoved out of their homes. Wealthy corporations have been given millions of dollars in government aid, while social assistance recipients living below poverty levels have had their benefits clawed back. Settler squatters, corporations and governments appropriate Indigenous lands with impunity, while homeless people are punished for sleeping in parks.

All of this is accompanied by the ideological violence that reduces “value” to property prices, “care” to customer service, “community safety and well-being” to policing, and “health” to a matter of individual biology and choice.

In the face of the state’s organized violence and abandonment, people in the encampments are developing their own systems of protection, love and care.

In stark contrast to the spectacles of pandemic price-gouging by pharmaceutical companies and corporate landlords, some encampment residents have started “free stores” to redistribute donated goods to people who need them. Groups like the Encampment Support Network supply food, water, survival equipment and solidarity, building “community safety and well-being” without funnelling more money to police. Community memorials and Indigenous healing circles mark and mourn every homeless death: public reminders that these lives are only disposable or “ungrievable” from the perspective of the capitalist state.

The pandemic is a global reminder of what many have never been allowed to forget: The stifling inequality engendered by capitalism takes lives, sometimes quickly and often slowly. With encampment evictions, the state punishes those being suffocated for gasping to breathe.