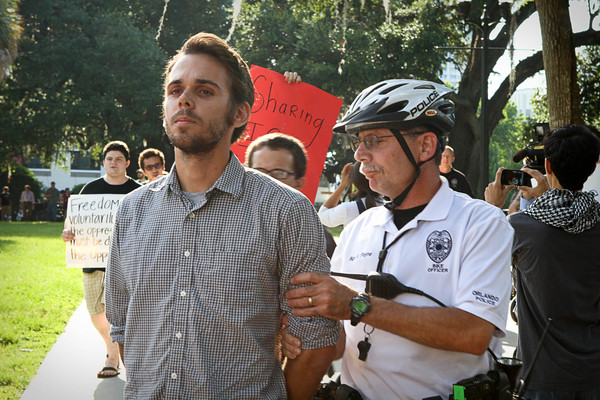 Homeless Under Attack Across The Nation

Above: Homeless activist arrested for feeding the hungry in Orlando.

It’s a long-standing media tradition, and not just among the BHLM (“bleeding-heart-liberal-media”) to mark Thanksgiving by paying some attention — be it sincere or merely dutiful — to those citizens who clearly don’t have a lot to be thankful for.

The media will often at this time of year label homeless people, in a Great-Aunt kind of phrase, as “Those Less Fortunate than Ourselves” — a barely adequate recognition of the shameful fact that this richest nation in the world now has a homeless population officially numbered at about 650,000 — and in actuality probably many more.

I’m hardly an exception myself, of course — indeed I’m responsible for producing such a seasonably-timed report on homelessness that airs this weekend on PBS.

It’s devoted, though, not so much to the homeless themselves … as to a spreading phenomenon that involves them (is aimed at them, to be blunt about it) in mid-sized American cities from Tampa to Seattle. A phenomenon that has so far generated insufficient media coverage nationally.

For PBS‘s Religion and Ethics Newsweekly (check local listings for airtimes) correspondent Lucky Severson and I investigate cities’ growing enforcement of new, or moribund but newly-revived ordinances in the streets of their downtown districts, as they work to spruce up those districts in the interest of post-recession recovery.

One inescapable result of the recession was the dramatic increase in homelessness since 2008 that has brought it to the current high level, with considerable concentration in those downtown areas. Local governments and businesses appear united in their desire to now sweep away the homeless — whose lingering presence, they feel, detracts from the economic improvement they have begun to experience and want to encourage.

Their chosen tactic has been to act — with police enforcement if need be — against charities and churches who are attempting to help the homeless on downtown streets. Especially, it seems, by offering them food.

“This is a more recent trend, a new twist, to criminalize the care-givers, the service providers,” says Maria Foscarinis, the Executive Director of the National Law Center on Homelessness and Poverty whose wide-ranging surveys have revealed that about 200 cities are now employing the tactic. “The most extreme example was actually making it a crime to offer food to people in public places, but short of that there are also efforts to make it extremely difficult, to the point of being impossible, to offer food in public places to people who are poor or homeless.”

Our TV report recounts a confrontation between police in North Carolina’s capital, Raleigh, and Reverend Hugh Hollowell (pictured second from left, with police officer, right) a Mennonite pastor whose ministry, called “Love Wins”, has fed the homeless in the city’s historic Moore Square every weekend for the past six years.

During the summer this year, police suddenly shut down his feeding program, under a rarely-invoked city ordinance against distributing food in a public place – which, we can speculate, could conceivably get you and me arrested if we split a sandwich between us on one of the Square’s park-benches.

Raleigh’s conflict got reasonably well-resolved after many angry protests over the city’s actions. Some new accommodation for the homeless is to be built very close by, as part of the Square’s impending redevelopment.

Matters look grimmer elsewhere, however. We also report on a mirror image, but murkier, of that Raleigh story. It’s in South Carolina’s capital, Columbia, where the city is planning a long-term ‘remedy’ that would mean bussing the homeless out to a facility already being referred to by the somewhat Orwellian name, “The Retreat,” that is situated 12 or so miles out of town.

It is at least heartening that with active protests prodding the local media, the northerly one of the two Carolinas did get to witness that one small victory for compassion.

And when I checked today… there will aptly enough be turkey on the menu in Raleigh’s Moore Square next week.

* * * *
Read more of David Tereshchuk‘s media industry insights at his regular column, The Media Beat, with accompanying video and audio. Listen also to The Media Beat podcasts on demand from Connecticut’s NPR station WHDD, and at iTunes.