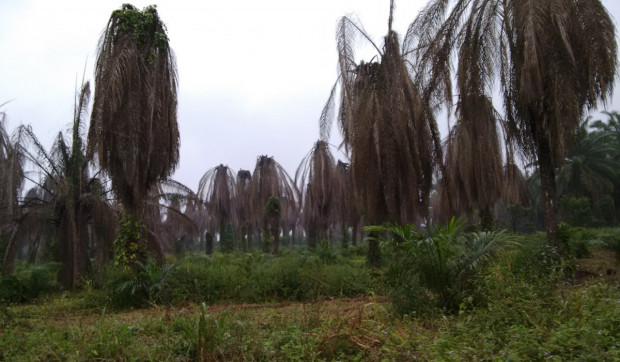 EarthRights International (ERI) filed a federal lawsuit today on behalf of Honduran farmers charging two World Bank Group members with aiding and abetting gross violations of human rights. The suit arises out of the substantial financial support two World Bank entities, the International Finance Corporation (IFC) and the IFC Asset Management Corporation (IFC-AMC), invested in Honduran palm-oil companies owned by the late Miguel Facussé. His companies – which exist today as Dinant – have been at the center of a decades-long and bloody land-grabbing campaign in the Bajo Aguán region of Honduras. The Plaintiffs in the suit allege that they are among the scores of farmers in the Bajo Aguán who have been shot, killed, and terrorized by Dinant and security forces working on its behalf. This is the first time a community has sued the IFC in federal court for aiding and abetting crimes related to a project the World Bank Group funded.

Background
The International Financial Corporation (IFC), the World Bank Group’s private lending arm, together with an IFC financial intermediary, the IFC Asset Management Corporation, have provided millions of dollars in financing to Dinant, even though, at the time, there were widespread allegations that Dinant employed hitmen, military forces, and private security guards to intimidate and kill local farmers who claim Dinant’s owner stole their land decades prior. The IFC (with U.S. taxpayer money) and IFC-AMC knowingly financed Dinant’s campaign of terror and dispossession against Honduran farmers. The IFC’s own internal watchdog, the Office of the Compliance Advisor/Ombudsman (CAO), found that IFC failed to adhere to its own policies to protect local communities, and continued to allow the company to breach those safeguards and either failed to spot or deliberately ignored the serious social, political and human rights context in which this company is operating.

The result was an explosion of extreme violence by public and private security forces against the farmers, their movement leaders, and lawyers representing them. Over 100 farmers have been killed since November 2009 when the IFC disbursed the first half of a $30 million loan to Dinant; and the number of killings continues to grow today. So too has IFC’s support for Dinant; even after the IFC’s internal watchdog scolded the IFC for the 2009 loan, the IFC continued supporting Dinant via an opaque system of financial intermediaries, including the IFC-AMC and the Honduran bank, Ficohsa.

While the IFC boasts of its mission to “end extreme poverty by 2030 and boost prosperity in every developing country,” the IFC has knowingly entered one of the world’s most persistent and abusive land conflicts on the side of Dinant, a primary author of poverty and violence in Honduras. In the words of one farmer in the Bajo Aguán, the IFC is not “ending poverty”; it is “ending the lives of the poor.”

EarthRights International filed the case with the support of several other human rights lawyers, including Jonathan Kaufman, Judith Brown Chomsky, and Lauren Carasik.

Community Statements:
Because of serious security concerns, all plaintiffs in this case will remain anonymous as Juan and Juana Doe.

“We have lost our compañeros, they have left our children without fathers, it’s been difficult to move forward, we live from our families and our land and now we are left with nothing. We want justice and the ability to raise our children again. We have to move forward.” Juana Doe III

“This place is very dangerous. We live in danger. I am still scared. People get killed here, and we know who the perpetrators are.” Juana Doe IV

“The police pulled people out of their houses. Military, police, and guards. We saw they were beating people including kids, so we were yelling, “Don’t hit the people!” One bullet hit me, it still affects my breathing. I didn’t realize I’d been shot, but I touched it and saw blood. Another person was shot through the stomach.” Juan Doe VIII

“Every day I am scared, but this is how life has become. At the end of the attack against me, the guards and military told me that they know where I live and that they will come to get me if I file a complaint against them.“ Juan Doe XI

EarthRights International Statements:
Because of serious security concerns, all lawyers on the case will be identified as ERI lawyer, not by their name.

“The horrendous spate of violence that followed the IFC’s loan to Dinant is probably one of the most severe instances of corporate-related human rights abuse and financier negligence in the past decade.” ERI lawyer

“The World Bank Group’s private lending arm, the IFC, failed to spot or deliberately ignored the serious social, political and human rights context in which this company is operating in Honduras. Instead of taking corrective action against Dinant, the IFC found ways to provide additional support to Dinant through opaque financial intermediaries. They chose profit over people at every turn.” ERI lawyer

“The IFC did not consult with local communities and did not identify the project as a high-risk investment, long after IFC personnel learned of the violence in the Bajo Aguán and long after the World Bank’s internal watchdog, the CAO, opened its investigation into the Dinant loan.” ERI lawyer

“The IFC clearly cannot police itself and it should no longer be allowed to hide behind a veil of immunity. The courts of the United States must be open to hear this case because nobody – not individuals, not corporations, not governments, and not the IFC – can get away with aiding these human rights abuses.” ERI lawyer