The trial of eight men charged with the murder of Honduran activist Berta Cáceres is right around the corner, but prosecutors may be heading to trial without important evidence. More than two dozen electronic devices seized in related raids as far back as 2016 were never subjected to analysis, according to an official response to Cáceres’s relatives from the Office of the Prosecutor for Crimes Against Life, a document that has not yet been made public.

Cáceres’s daughter Bertha Zúñiga Cáceres does not believe it was an oversight or lack of professionalism. Now serving as the general coordinator of the Civic Council of Popular and Indigenous Organizations of Honduras (COPINH), the organization her mother co-founded and led at the time of her murder, Zúñiga Cáceres views the revelations about the gaps in evidence as part of a strategy.

“It’s a form of denial, of refusing to determine what is really behind the murder,” she told Truthout.

Berta Cáceres was shot to death on March 2, 2016, in her home in La Esperanza, a town in western Honduras. Her longtime friend and colleague, Mexican activist Gustavo Castro, was wounded during the attack. As a prominent Indigenous and social movement leader, Cáceres had been receiving death threats related to her involvement with the COPINH-affiliated community struggle against the proposed Agua Zarca hydroeletric dam, currently on hold, and against Desarrollos Energéticos, S.A. (DESA), the company behind it. 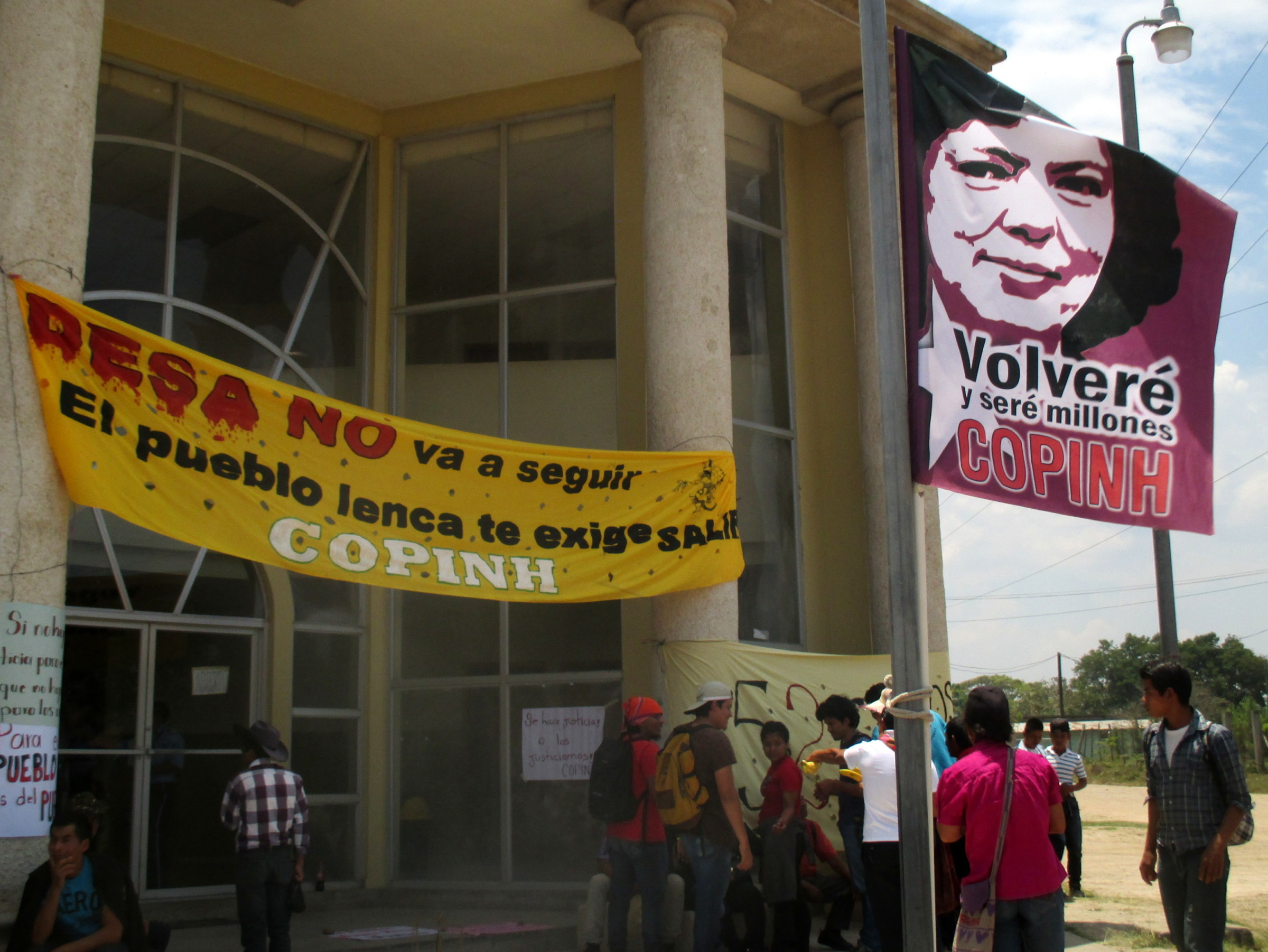 “I will return, and I will be millions,” reads a flag with Berta Cáceres’s image outside the Siguatepeque courthouse during an April court case related to the authorization of the Agua Zarca dam.
SANDRA CUFFE

Security forces carried out the first arrests for Cáceres’s murder in May 2016. The four alleged perpetrators detained at that time included Mariano Díaz, an active-duty Army Major at the time of his arrest, with a background in military intelligence and special forces; Douglas Bustillo, DESA’s head of security, who also has a military background; and Sergio Rodríguez, DESA’s social, environmental and communications manager.

By mid-January 2017, four more men had been arrested, including Henry Hernández, a former member of the military with special forces experience. Everyone arrested was remanded into custody pending trial. Over the course of the investigation, prosecutors and police used wiretaps and carried out search-and-seizure operations, raiding the homes of many of the suspects, as well as DESA’s offices. 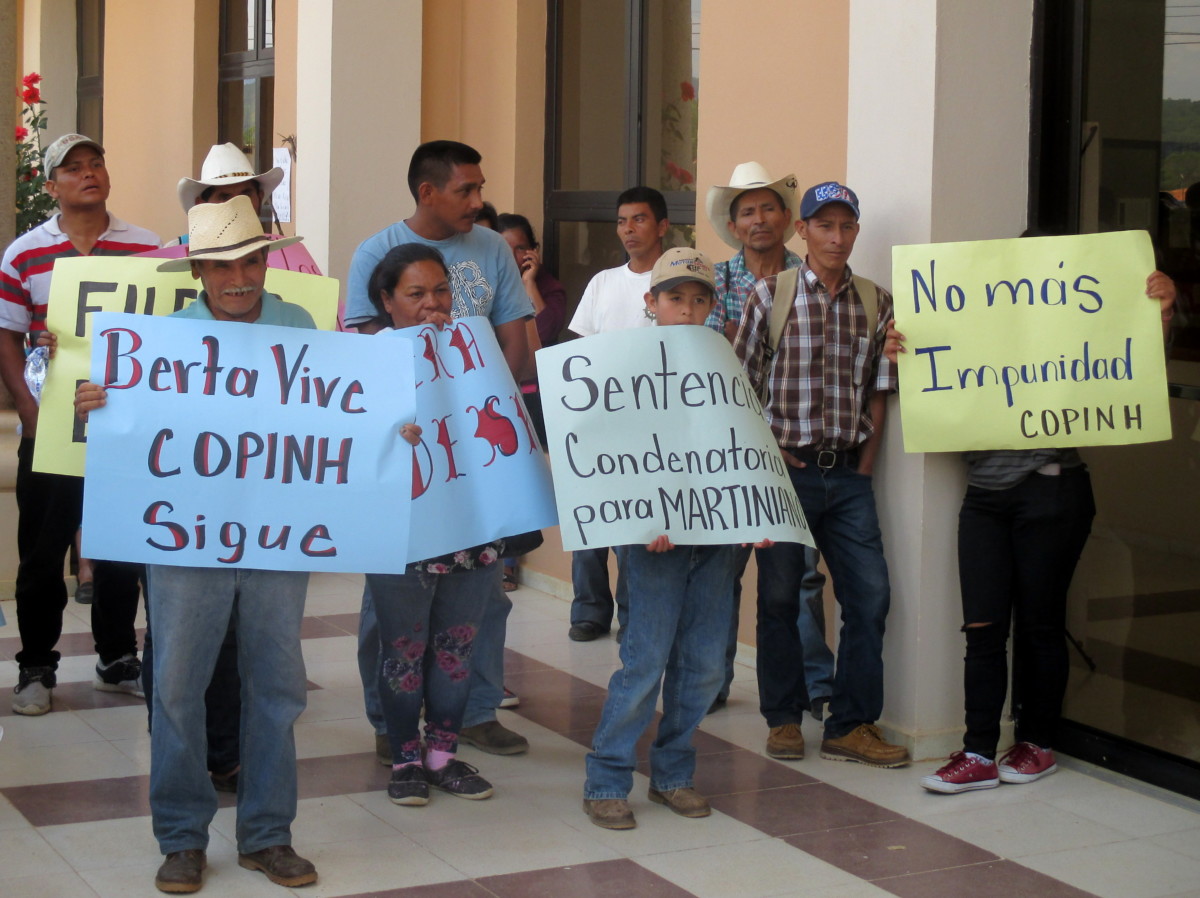 “Berta lives, COPINH continues,” reads a sign held by a COPINH members outside the La Esperanza courthouse during an April court case related to the authorization of the Agua Zarca dam.
SANDRA CUFFE

Following numerous delays and setbacks, the judiciary announced that the trial of the eight men accused of Cáceres’s murder and the attempted murder of Castro is set to begin September 10. A ninth alleged perpetrator is also in pretrial detention. DESA company president David Castillo was arrested March 2 of this year, on the second anniversary of Cáceres’s death. Castillo is accused of masterminding Cáceres’s assassination and will face trial separately.

The Office of the Public Prosecutor is responsible for all criminal prosecution in the country, but victims may participate as private plaintiffs alongside public prosecutors. Cáceres’s children and mother are formally participating as private parties to the case, as is Castro. They are legally entitled to the case files and evidence, but Cáceres’s relatives have been pushing prosecutors for more than a year to fulfill that duty, making more than 30 requests that resulted in several court orders directing the Office of the Public Prosecutor to hand over all of the evidence. 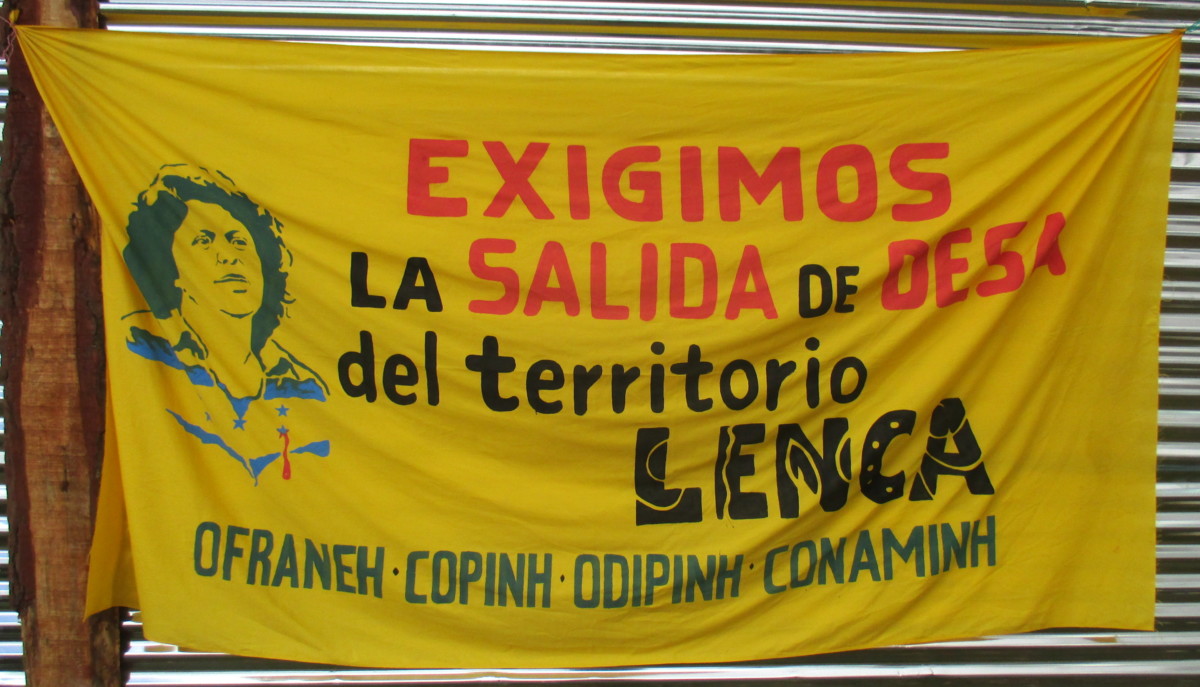 This month, they finally found out why so much of the information they were requesting has not been turned over. In compliance with a July 27 court order, prosecutors provided a detailed response, revealing that dozens of items seized during five of the raids — including properties belonging to Bustillo, Díaz, and DESA — were never subjected to technical analysis. Those items include four computers and laptops, four tablets, three cameras, one cell phone, one external hard drive, 12 USB flash drives, and even a revolver, according to the details listed by the Prosecutor’s Office for Crimes Against Life.

When contacted for comment on these unanalyzed devices, a spokesperson for the Office of the Public Prosecutor told Truthout that prosecutors from multiple offices and units worked diligently to analyze seized devices, with assistance from experts provided by the US Embassy. The spokesperson added that at every step of the way, to the extent permitted by the law, prosecutors have shared all of the evidence and information with the private parties to the case, including Cáceres’s relatives, but the law does not permit prosecutors to share information that could obstruct ongoing investigations. In response to claims that a significant number of electronic devices have not been analyzed, the spokesperson emphasized that almost all devices have been analyzed and incorporated into the case, with the main exception of some cell phones that are deactivated, damaged, or of a brand that the analysts do not know how to access without the owners’ pass codes.

Zúñiga Cáceres is disheartened. “I think it’s quite frustrating to be repeatedly up against any kind of denial, because in the end, this is a repudiation of the truth,” she told Truthout with regard to the document detailing the devices that have yet to be analyzed. She and COPINH had surmised that information was being suppressed, and now the issue is also that the information that would have corresponded to the analysis of many seized devices just does not yet exist, she explained.

“The fact that devices belonging to Mariano Díaz – a key element connecting the army and the responsibility of the state – were not subject to analysis is a serious matter,” said Zúñiga Cáceres. “The goal of that is to attempt to conceal the roles of the different kinds of people who are involved.”

According to the details laid out in the document written by prosecutors in response to the court order, items seized from a raid on a property belonging to Díaz that have not been subject to analysis consist of a laptop, a cell phone, a tablet, an external hard drive, a USB flash drive and a revolver. Two computers and several USB flash drives seized from DESA’s offices have also never been subjected to technical analysis. 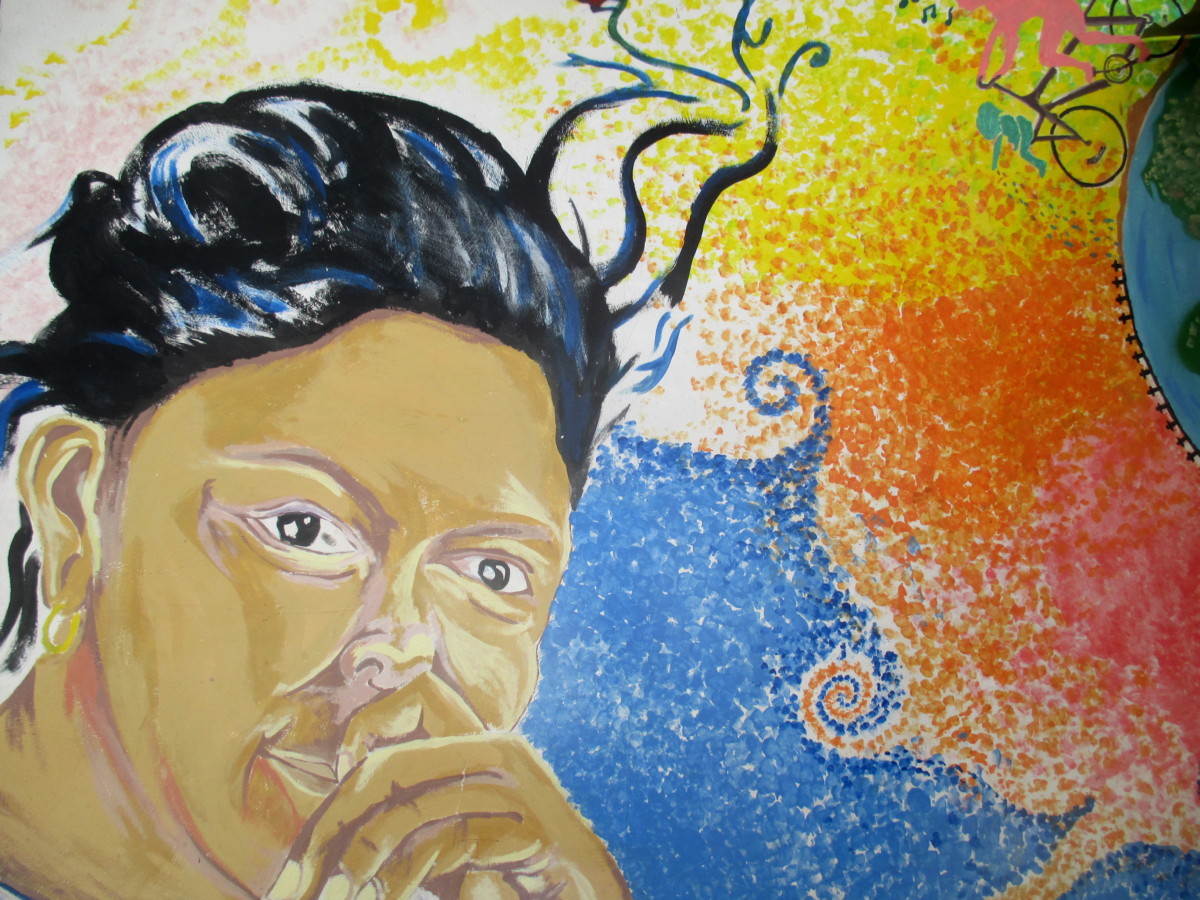 A mural on the wall of COPINH’s Utopia gathering place in La Esperanza depicts Berta Cáceres, the organization’s leader murdered in 2016.
SANDRA CUFFE

Zúñiga Cáceres and COPINH have always maintained that the masterminds behind Cáceres’s murder extend to people well above Díaz and DESA president Castillo, including DESA board members and shareholders, as well as high-level government and military officials. The organization does not trust the Office of the Public Prosecutor, said Zúñiga Cáceres. They suspect the failure to analyze seized devices is part of a strategy to limit the scope of a murder case to exclude potential information about higher-level connections between the company, security forces and state. DESA has consistently denied any role in the murder.

COPINH has also been shut out of proceedings. The organization filed a motion to be included as a private party, but the court rejected the motion during the July 27 hearing. Under the Honduran Code of Criminal Procedure, companies and associations affected by a crime have the right to participate as private parties, said Heidy Alachán, a lawyer representing COPINH and a member of the Broad Movement for Dignity and Justice (MADJ), a legal and community support organization. The court argued that the impact on an association would have to be financial, based on their interpretation of the relevant article of the code, and that Cáceres’s murder was only detrimental to the morale and emotions of COPINH members, she said. COPINH plans to appeal the decision.

“This also complements other behavior from the Office of the Public Prosecutor, denying information about people duly connected to DESA, such as Sergio [Rodríguez], for example, as well as the two other people who connect the roles of the company and the state,” Alachán told Truthout. “There is a firm intention to deny the political dimension of the trial in every way possible.”

The proceedings are moving forward regardless. A hearing is scheduled for August 23 and 24 for the court to consider the admissibility of proposed evidence. The trial has been set for September 10-28, but there is always a chance that evidentiary issues or defense motions could delay the start date, according to both Alachán and Zúñiga Cáceres.

COPINH has plans for the lead-up to the trial. The organization will launch an international campaign on September 2, calling for global mobilizations and other actions to demand justice and the permanent cancellation of the Agua Zarca dam, said Zúñiga Cáceres. COPINH members also plan to maintain a presence night and day outside the capital city courts for the duration of the trial. The organization is requesting that international observers accompany the action.