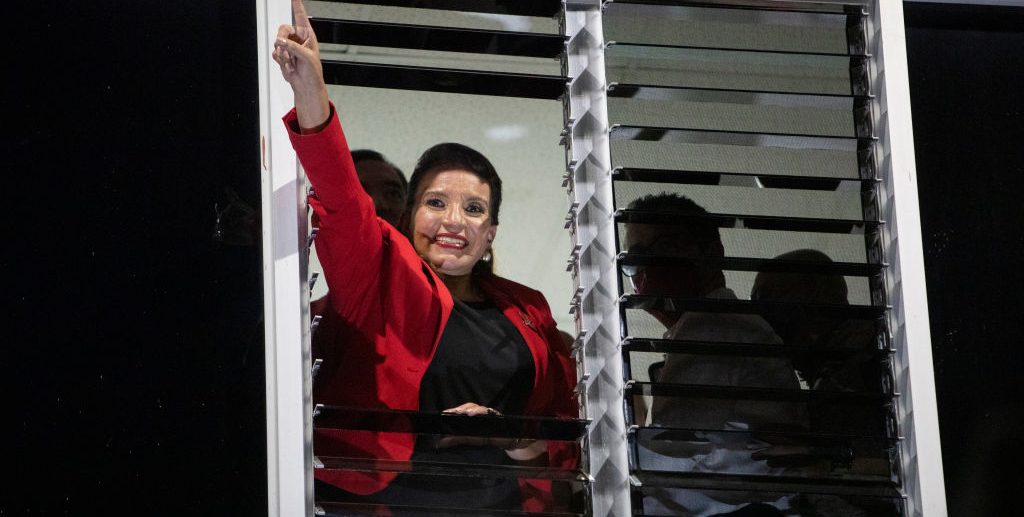 Since a US-backed coup toppled Mel Zelaya in 2009, Honduras has faced a clampdown on democracy and serious human rights abuses.

But the election of socialist Xiomara Castro is a chance to break the cycle.

What appeared impossible has been achieved: the people of Honduras have broken the perpetuation, through electoral fraud and thuggish violence, of a brutal, illegal, illegitimate, and criminal regime.

By means of sheer resistance, resilience, mobilization, and organization, they have managed to defeat Juan Orlando Hernandez’s narco-dictatorship at the ballot box. Xiomara Castro, presidential candidate of the left-wing Libre party (the Freedom and Refoundation Party, in its Spanish acronym), obtained a splendid 50+ percent—between 15 to 20 percent more votes than her closest rival candidate, Nasry Asfura, National Party candidate, in an election with historic high levels of participation (68 percent).

The extraordinary feat performed by the people of Honduras takes place under the dictatorial regime of Hernandez (aka JOH) in an election marred by what appears to be targeted assassinations of candidates and activists. Up to October 2021, 64 acts of electoral violence, including 11 attacks and 27 assassinations, had been perpetrated. And in the period preceding the election (11-23 November) another string of assassinations, mainly of candidates, took place.

None of the fatal victims were members of Hernandez’s National Party. The aim seems to have been to terrorize the opposition, and particularly their electorate, into believing that it was unsafe to turn out to vote—and that even if they did, they would again steal the election through fraud and violence, as they have done twice already, in 2013 and 2017.

Commentators correctly characterize this as the ‘Colombianization’ of Honduran politics—that is, a ruling gang in power deploys security forces and paramilitary groups to assassinate opposition activists. In Honduras, the most despicable act was the murder of environmental activist, feminist, and indigenous leader Berta Caceres by armed intruders in her own house, after years of death threats.

She had been a leading figure in the grassroots struggle against electoral fraud and dictatorship, and had been calling for the urgent re-founding of the nation, a proposal that has been incorporated into the program of mass social movements such as the Council of Popular and Indigenous Organizations of Honduras (COPINH). Since 2009, hundreds of activists have been assassinated at the hands of the police, the army, and paramilitaries.

The Colombianization analogy does not stop at the assassination of opponents. Last June, the Washington Post explained the extent of infiltration by organized crime: ‘Military and police chiefs, politicians, businessmen, mayors and even three presidents have been linked to cocaine trafficking or accused of receiving funds from trafficking.’

US Judge Kevin Castel, who sentenced ‘Tony’ Hernandez, JOH’s brother, to life in prison after being found guilty of smuggling 185 tons of cocaine into the US, said: ‘Here, the [drug] trafficking was indeed state-sponsored’. In March 2021, at the trial against Geovanny Fuentes, a Honduran accused of drug trafficking, the prosecutor Jacob Gutwillig said that President JOH helped Fuentes with the trafficking of tons of cocaine.

Corruption permeates the whole Honduran establishment. National Party candidate Nasry Asfura has faced a pre-trial ‘for abuse of authority, use of false documents, embezzlement of public funds, fraud and money laundering’, and Yani Rosenthal, candidate of the once-ruling Liberal party, a congressman and a banker, was found guilty and sentenced to three years in prison in the US for ‘participating in financial transactions using illicit proceeds (drug money laundering).’

The parallels continue. Like Colombia, Honduras is a narco-state in which the US has a host of military bases. It was from Honduran territory that the Contra mercenaries waged a proxy war against Sandinista Nicaragua in the 1980s, and it was also from Honduras that the US-led military invasion of Guatemala was launched in 1954, bringing about the violent ousting of democratically elected left-wing nationalist president Jacobo Arbenz. Specialists aptly refer to the country as ‘USS Honduras’.

So cocaine trafficking and state terrorism, which operates as part of the drug business in cahoots with key state institutions, is ‘tolerated’ and probably supported by various US agencies ‘in exchange’ for a large US military presence—the US has Soto Cano and 12 more US military bases in Honduras—due to geopolitical calculations like regional combat against left-wing governments. This criminal system’s stability requires the elimination of political and social activists.

Thus many US institutions, from the White House all the way down the food chain, turn a blind eye to the colossal levels of corruption. In fact, SOUTHCOM has been actively building Honduras’ repressive military capabilities by funding and training special units like Batallion-316, which reportedly acts as a death squad, ‘guilty of kidnap, torture, and murder’. ‘Between 2010 and 2016, as US “aid” and training continued to flow, over 120 environmental activists were murdered by hitmen, gangs, police, and the military for opposing illegal logging and mining,’ one report explains.

The legacy left by right-wing governments since the violent ousting of Mel Zelaya in 2009 is abysmal. Honduras is one the most violent countries in the world (37 homicides per 100,000 inhabitants, with 60 percent attributable to organized crime), with staggering levels of poverty (73.6 percent of households live below the poverty line, out of which 53.7 percent live in extreme poverty), high levels of unemployment (well over 12 percent), and even higher levels of underemployment (the informal sector of the economy, due to the effects of Covid-19, grew from 60 to 70 percent). Its external debt is over US$15 billion (57 percent of its GDP), and the nation suffers from high incidences of embezzlement and illegal appropriation of state resources by this criminal administration.

The rot is so pronounced that back in February this year, a group of Democrats in the US Senate introduced legislation intended to cut off economic aid and sales of ammunition to Honduran security forces. The proposal ‘lays bare the violence and abuses perpetrated since the 2009 military-backed coup, as a result of widespread collusion between government officials, state and private security forces, organized crime and business leaders.’ In Britain, Colin Burgon, the president of Labour Friends of Progressive Latin America, issued scathing criticism of the British government’s complicity for ‘having sold (when Boris Johnson was Foreign Minister no less) to the Honduran government spyware designed to eavesdrop on its citizens, months before the state rounded up thousands of people in a well-orchestrated surveillance operation.’

To top it all off, through the ZEDES (Special Zones of Development and Employment) initiative, whole chunks of the national territory are being given to private enterprise subjected to a ‘special regime’ that empowers investors to establish their own security bodies—including their own police force and penitentiary system—to investigate criminal offences and instigate legal prosecutions. This is taking neoliberalism to abhorrent levels, the dream of multinational capital: the selling-off of portions of the national territory to private enterprise. Stating that the Honduran oligarchy, led by JOH, is ‘selling the country down the river’ is not a figure of speech.

It is this monstrosity, constructed since the overthrow of President Mel Zelaya in 2009 on top of the existing oligarchic state, that the now victorious Libre party and incoming president Xiomara Castro need to overcome to start improving the lives of the people of Honduras. The array of extremely nasty internal and external forces that her government will be up against is frighteningly powerful, and they have demonstrated in abundance what they are prepared to do to defend their felonious interests.

President-elect Xiomara’s party Libre, is the largest in the 128-seat Congress, and with its coalition partner, Salvador, will have a very strong parliamentary presence, which will be central to any proposed referendum for a Constituent Assembly aimed at re-founding the nation. Libre has also won in the capital city Tegucigalpa, and in San Pedro Sula, the country’s second largest city. More importantly, unlike elections elsewhere (in Venezuela, Nicaragua, and Bolivia), the National Party’s candidate, Asfura, has conceded defeat. Thus, Xiomara has a very strong mandate.

However, in a region dominated by US-led ‘regime change’ operations—the coup in Bolivia, the coup attempt in Nicaragua, the mercenary attack against Venezuela, plus a raft of violent street disorders in Cuba, vigorous destabilization against recently elected President Castillo in Peru, and so on *ad nausea—*Honduras will need all the international solidarity we can provide, which we must do.

The heroic struggle of the people of Honduras has again demonstrated that it can be done: neoliberalism and its brutal foreign and imperialist instigators can be defeated and a better world can be built. So, before Washington, their Honduran cronies, their European accomplices, and the world corporate media unleash any shenanigans, let’s say loud and clear: US hands off Honduras!