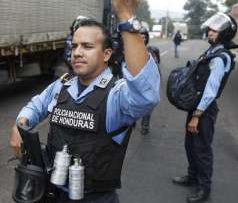 Note: From the Honduras Solidarity Network, their statement “10 years of US and Canadian Supported Dictatorship in Honduras 10 Years of Resistance and Solidarity.”

The Honduras Solidarity Network in North America (HSN) commemorates the June 28th, 10 year anniversary of the illegal coup in Honduras with actions in support of the Honduran resistance and against US and Canadian support for the illegitimate regime of Juan Orlando Hernandez (JOH). Ten years of coup has resulted in increasing poverty, violence, human and civil rights violations, corruption, and a flow of refugee migration fleeing the crisis. A narco-government has been created: family members of JOH and other coup officials have been jailed in the US for narcotics trafficking, yet US government support for the regime continues.

For the past month protests across the country have grown to massive proportions despite a violent repression that has left at least 5 dead and dozens of injured. The HSN will be organizing actions in various cities in the US and Canada. It will also launch a social media campaign to show our solidarity with the Honduran people and to demand that the US. and Canadian governments stop funding and supporting dictatorship .

Riot control police in Honduras have called off a three-day work stoppage demanding better food and pay hikes, but they warned, they are not going back to repress thousands of demonstrators who are in the streets demanding President Juan Orlando Hernandez to quit.

Popular mobilizations have been following one another in Honduras. Now, 60,000 doctors and teachers are struggling against a political system that is trying, at the orders of the International Monetary Fund, to privatize health and education. There is so much people’s support in those demonstrations that the National Police joined the strike, forcing the Juan Orlando Hernandez Administration to deploy the armed forces to repress the protests.

But this story really began ten years ago, on June 28, 2018, when 200 hooded soldiers staged a premeditated attack in the middle of the night on the Official Residence of the President in Tegucigalpa and took away elected President Mel Zelaya in his pajamas. After a brief stop at one of the US military bases in Honduras, the President was deported to Costa Rica even though article 102 of the Honduran Constitution plainly bans any citizen from being expatriated or handed over to a foreign State.

The basis for the coup d’état was that Mel Zelaya wanted to place an item on the ballot in the upcoming elections to promote a referendum that would pave the way for constitutional reforms. But that was only the pretext for the coup. The real reason was that Zelaya, a landowner who became President with the support of the Liberal Party, had turned to the left when he realized how much the Honduran people were suffering from living in poverty and violence. He went even further by first signing up Honduras for Petrocaribe, —an oil alliance of many Caribbean states with Venezuela to purchase oil on conditions of preferential payment—and then he supported the ALBA trade agreement.

That was the first successful coup against one of the governments of the progressive current and it was carried out against its weakest link. This coup started a trend of conservative restoration throughout Latin America, followed by the parliamentary coups in Paraguay against Fernando Lugo, in Brazil against Dilma Rousseff, at the same time the lawfare—a judicial war—was triggered against progressive leaders like Brazil’s Lula da Silva, Argentina’s Cristina Fernandez de Kirchner or Ecuador’s Rafael Correa.

In 2013, with Mel Zelaya already back in the country but barred from running for public office, his wife Xiomara Castro was the presidential candidate for the Liberty party and Refoundation or LIBRE. LIBRE’s lack of experience and an unequal land distribution resulted in that election being manipulated in favor of Juan Orlando Hernandez. One little tip; at the same time the ballots were being recounted, judges of the Supreme Electoral Tribunal were meeting the United States Ambassador to Honduras.

But it was in 2017 when the third coup—second in electoral matters—achieved what they began in 2009. Opposition parties LIBRE and PAC confronted Hernandez’s reelection and a statement released by the, not suspicious at all, Organization of American States (OAS) Secretary General about the result of the elections explains better the situation than any political analysis could by revealing deliberate human intrusions in the computing system; intentional elimination of digital footprints; the impossibility of knowing the number of opportunities in which the system was breached; ballot boxes opened or without certificates; extreme statistical improbability regarding levels of participation inside one district; paper ballots recently printed; and other irregularities as well as the narrow margin of votes between the two most voted for candidates, making it impossible to determine the winner with any degree of accuracy.

Three coup d’états in ten years—one military and two electoral—is the balance in one of the poorest and most unequal countries in Latin America. It all has a very clear goal; imposing the neoliberal model through violence in a key country which was always a strategic rearguard for the United States operations in Central America. The impunity of the assassination of environmentalist leader Berta Caceres in a country in which the brother of the President is accused of managing cocaine trafficking routes to the United States is probably the best, and at the same time most terrible, metaphor of the way the shock doctrine is used to discipline the civil population.

A shock doctrine who’s most dramatic consequence are the caravans of thousands of people who are displaced from their lives as a result of the neoliberal social plundering. It is a scheme that makes people leave their families and belongings behind to try to reach the American way of life at the risk of being victims of extortion, being kidnapped or even killed along the route.

For this reason, Central American migrants, particularly from Honduras, should be treated as political refugees from a neoliberal model dictatorship. And when the mass media wants to talk about human rights or migration drama in other places, let’s demand they go to Honduras and tell us not only about what is useful for a reality show to increase ratings but about the real causes of this mass migration.

And to start the process in solving this drama, let’s endorse the statement released by LIBRE on June 20, signed by Mel Zelaya (the same day the armed forces were murdering taxi driver Erick Peralta) and which declares their permanent struggle against the dictatorship headed by the United States since 2009, which clearly states: Juan Orlando Hernandez must leave now.