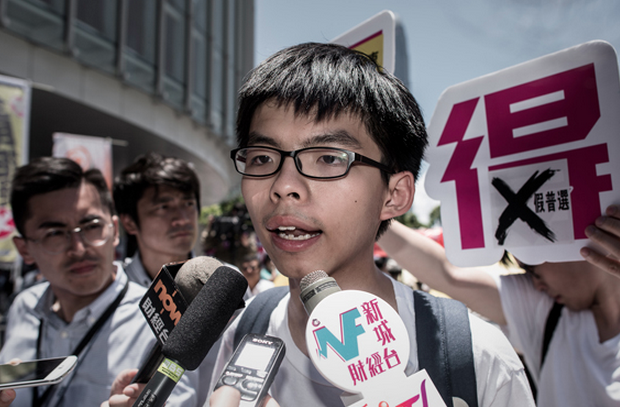 Photo: Occupy Central leader Joshua Wong speaks to the media after a vote at the city’s legislature in Hong Kong, June 18, 2015.

The face of last year’s pro-democracy Occupy Central movement in Hong Kong, Joshua Wong, hit out on Thursday after being charged by police for his role in the mass protests for universal suffrage in the former British colony.

The charges relate to a protest on Sept. 26 during which some Umbrella Movement protesters climbed into Civic Square, part of the Hong Kong Special Administrative Region (SAR) government complex.

Writing on his Facebook page, Wong said that the freedom of association, among a number of traditional freedoms that Beijing promised to uphold after the 1997 handover to Chinese rule, has been severely limited in the city in recent years.

“I would like to reiterate that if we went back in time to 2012 or 2013, we would be in a space where freedom to gather in public was allowed,” Wong said.

“But Civic Square isn’t a road, and in going there, we didn’t cause any obstruction to daily traffic, nor to the normal functioning of society,” he said.

He told reporters before entering the Wanchai police station on Thursday: “Today… is a political prosecution.”

He added: “My involvement in the Civic Square action is the best thing I have accomplished in the four years I’ve been involved in social student movements.”

“I won’t come to regret it… even if I have to pay the price,” Wong said.

Wong’s lawyer Michael Vidler said the charges against his client were “totally flawed.”

“In my view it’s a clear abuse of process,” Vidler told reporters, as dozens of supporters waved the yellow umbrellas that became an icon of the pro-democracy after protesters used umbrellas to ward off tear gas and pepper spray fired by riot police.

The charges against Wong, Law, and Chow will be heard at a magistrates court on Sept. 2.

“The occupation of Civic Square was a shock to this unjust system, and can be seen as a form of civil disobedience,” Shum said. “Contrary to what is claimed by [justice] secretary Rimsky Yuen, these charges are not apolitical.”

He compared the charges against Wong, Law and Chow with a lack of charges so far against seven police officers filmed by journalists beating up Civic Party member Ken Tsang in a dark area while they were clearing a main road of protesters during the Occupy movement.

“If they were genuinely apolitical, then those seven rogue cops … would have been charged by now,” Shum said.

Seven Hong Kong policemen were arrested in connection with Tsang’s beating last November on suspicion of “assault resulting in grievous body harm,” but have yet to be charged, prompting Tsang’s lawyers to apply for a judicial review.

The public order charges come after Wong and Law pleaded not guilty last month to separate charges of obstructing police at an earlier protest in June 2014, during which they burned a copy of a policy document issued by Beijing.

Hong Kong blogger and activist Oiwan Lam said the authorities have continued to pursue key figures in the Occupy Central movement, nearly a year after the events occurred.

“The whole environment is one of prosecution; it’s as if it’s the new normal,” Lam said in a recent interview with RFA.

“There has been some online reaction to it, but I think a lot of people are just holding their anger inside,” she said. “The judicial system in Hong Kong is getting worse and worse. It feels a bit hopeless right now.”

“The anger’s still there,” she said. “But it will get expressed in different ways than it did before the Umbrella Movement.”

Hong Kong was promised a “high degree of autonomy” under the terms of its 1997 return to Chinese rule, within the “one country, two systems” framework agreed between British and Chinese officials and enshrined in its mini-constitution, the Basic Law.

But the white paper, published days ahead of an unofficial referendum that saw 400,000 people vote in favor of universal suffrage and public nominations, spelled out that such autonomy was still subject to the will of Beijing, and didn’t constitute full autonomy, nor decentralized power.

Members of the city’s Legislative Council (LegCo) voted against the bill by 28 votes to eight, with 34 pro-government lawmakers walking out in an unsuccessful bid to stall the vote.

The bill would have enacted an Aug. 31 plan outlined by China’s parliament, the National People’s Congress (NPC), to allow all of Hong Kong’s five million eligible voters to cast a ballot in the 2017 race for the next chief executive, but would have limited the slate to candidates approved by Beijing.