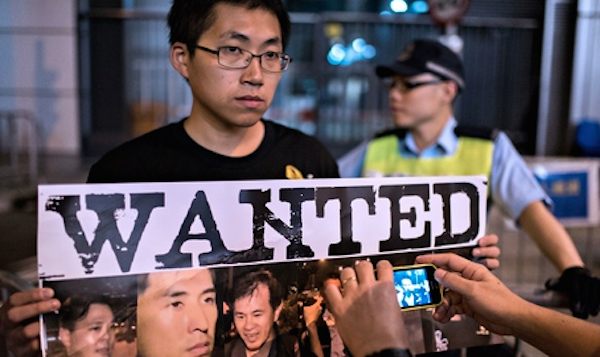 Hong Kong’s embattled chief executive, Leung Chun-ying, said on Thursday afternoon that the government would welcome a dialogue with protest leaders, after two consecutive nights of violent clashes with police reinvigorated the pro-democracy movement, which has paralysed swaths of the city.

During an afternoon press conference Leung said the government would be willing to meet with the Hong Kong Federation of Students, one of the main protest organisers, “as soon as we can, and hopefully within the following week”.

Yet Leung denied any possibility that officials would negotiate on any of the protesters’ core demands — that the government offer civic nominations and “full democracy” in 2017 elections, and that he step down. He added that the government has little tolerance for the protests, which have “created conflict with the public”.

“We will restore as soon as possible social order in Hong Kong, including traffic,” he said. “Over the past few days, the police have effectively cleared various roads, the effect of which can be seen.”

Early on Friday morning, police moved in to remove some protesters’ tents and canopies in the Mong Kok area of the city. Police said they were not trying to clear the site, which is an offshoot protest zone across Victoria Harbour from the main occupied area in the city’s financial district.

Leung’s second-in-command, Carrie Lam, had agreed to talks earlier this month, but cancelled them after the gulf between the two sides’ demands appeared too wide to offer any hope of reconciliation.

On Thursday night, deputy secretary general of the Federation of Students, Lester Shum, told a crowd of protesters that students “would not be afraid of dialogue”, but did not mention a potential timeline for talks.

“If [Leung] is offering to talk but at the same time [is] ordering police to clear the scene violently, the people know how sincere he is,” said Alex Chow, the group’s leader, according to the South China Morning Post.

Wai-chung Bastien, a 34-year-old protester, said: “What CY Leung repeated [on Thursday] is that they’re happy to have a dialogue, but the goal posts aren’t changing — meaning the goalposts are Beijing’s, and that he will not resign. The two sides have a wide gap between them.”

Bastien added that he doubts the announcement will cause the demonstrations to die down.

Earlier on Thursday, Admiralty, the main protest site, was quiet and calm. Tourists walked among umbrella-themed art installations, snapping pictures; volunteers sat fanning themselves at first aid and supply stands. The mood was more tense in Mong Kok, another major protest site in a working-class neighbourhood to the north — arguments broke out between protesters and police, though no injuries or arrests have been reported.

Protesters have been outraged by incidents of reported police brutality over the past two nights, re-energising a movement that had, owing to both physical exhaustion and the government’s apparent inflexibility, begun to flag.

On Wednesday morning, local media broadcast a video showing a group of six or seven police officers leading pro-democracy protester and Civic party member Ken Tsang from a protest site with his hands bound, and then beating him in a poorly lit corner behind a nearby building. On Wednesday night, police in Admiralty used pepper spray against crowds of protesters as they attempted to block a road near government headquarters. Two protesters were arrested, and three officers were injured.

“Clashes between police and demos over the past two evenings have been traumatic and stressful for both the police and the demonstrators,” said Regina Ip, a pro-Beijing lawmaker in Hong Kong’s legislative council. She added that she “can fully understand the stress [the police] are under”.

“Although the demonstrators claim to be peaceful, I think they can be highly provocative verbally,” she said. “When I left [the legislative council] last night, I was surrounded by hundreds of demonstrators, lunging at me. So I have stepped up my own security.”

US state department spokeswoman Jen Psaki said on Thursday that the US was deeply concerned about the video, and called for an investigation. “We renew our call for the Hong Kong government to show restraint and for protesters to continue to express their views peacefully,” she said.

By nightfall, Admiralty had filled up with hundreds of protesters, many listening to music performances and speeches by protest leaders.

“We may not immediately get our wishes,” said Edward Chiu, 49, a regional director at an American company, as a local singer-songwriter performed the Bob Dylan song Blowing in the Wind. “But if we can communicate the idea of democracy to those around us – to our colleagues, to our students – I think this can help us gradually move towards what we want to achieve.”

“We are here to reconstruct our identity — to create a new type of Hongkonger,” he said, to applause. “Unlike the old Hongkonger, who focuses only on materialistic achievements, we are changing our identity. The outcome may be unpredictable. But we are creating hope for a new generation of young people, who can rebuild Hong Kong.”