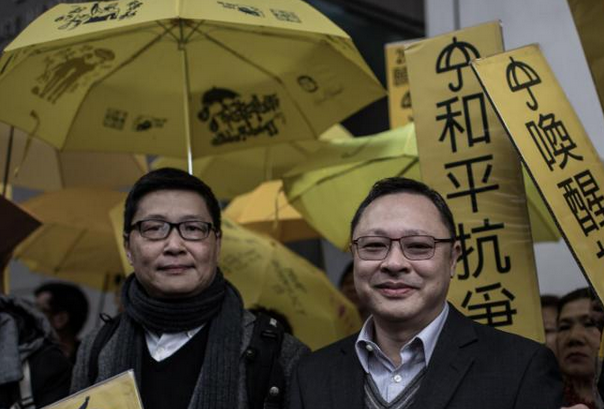 Hong Kong (AFP) – The original founders of Hong Kong’s pro-democracy Occupy movement were arrested and released Saturday as the city’s police chief defended the investigation into mass protests, saying it was not “a show”.

A number of protest leaders have been arrested and released without charge, with some calling the investigation harassment.

Occupy founder Benny Tai said that he, Chan Kin-man and Chu Yiu-ming had been formally arrested on accusations of organising and participating in an illegal assembly, but were not charged. They were released after three hours.

“Three of us were showed some videos and articles… we were released unconditionally,” he said.

More than two months of street rallies calling for fully free leadership elections ended in December when protest camps were cleared, but police have vowed to investigate the “principal instigators”.

“The police made the arrangements (for the arrests) in private and it was never made public. How can you say it’s a PR show? Who told you they would go to a police station? We should be clear whose show it is,” he told reporters, confirming that those released may be asked back as the investigation was ongoing.

While other protest leaders have questioned police motives, Tai said he “trusted” the rule of law.

“I still trust the police and the prosecution… will strictly follow the requirements of Hong Kong laws in any investigation.

“The public can make their own judgment on whether there are any political motives behind their investigation,” he said.

Dozens of supporters outside the station, including lawmakers, held up banners and yellow umbrellas — the symbol of the democracy movement.

“I absolutely believe that Hong Kongers will not give up,” Tai said in a speech to the crowd before he went in to the station.

Tension remains high in the semi-autonomous southern Chinese city since the street blockades which brought parts of the city to a standstill.

They were sparked after Beijing said that candidates for the 2017 vote would be vetted by a loyalist committee.

Pro-democracy media tycoon Jimmy Lai and prominent student leaders including Joshua Wong and Alex Chow have also been arrested and released as part of the widespread investigation.

Both Chow and Wong questioned the process, saying police should charge them if they had the evidence.

The Occupy founders first turned themselves in at the beginning of December in a move to get the protests off the streets after violent clashes, but were not arrested.

The Occupy movement was the first to galvanise support for civil disobedience over political reforms, but as the protests went on the group faded into the background as students took over.

Tai has said it would now take a different approach to promoting democracy, including through education.

He confirmed Saturday that he would join a pro-democracy rally through the city on February 1 — the first major march since the protest camps were cleared — which organisers expect to draw 50,000 people.